Scotland, who had stunned Bangladesh before beating Papua New Guinea, remained unbeaten and finished their group encounter with six points. 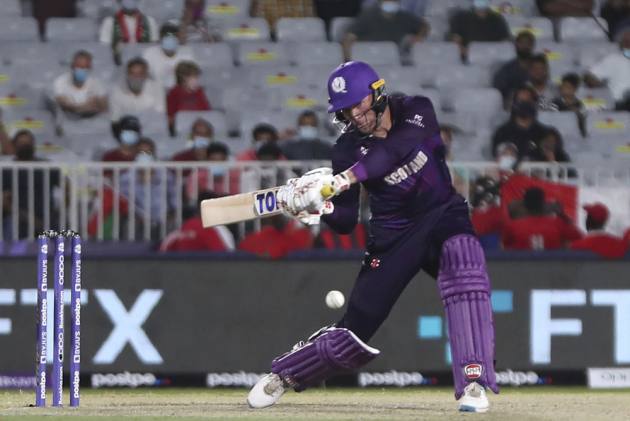 An impressive Scotland crushed hosts Oman by eight wickets to register their third consecutive win in the first round and qualify for the T20 World Cup Super 12 stage by topping Group B in Al Amerat on Thursday.

Scotland, who had stunned Bangladesh by six runs before beating Papua New Guinea by 17 runs in their previous matches, remained unbeaten and finished their group encounter with six points.

Besides Scotland, Bangladesh also qualified for the Super 12s from the group by finishing second with four points. Hosts Oman and PNG are out of the tournament.

Scotland are now placed alongside India, Pakistan, New Zealand, Afghanistan and an yet-to-be decided second-placed team from Group A in Group 2 of the Super 12s.

In Thursday's match, Scotland first dished out a clinical bowling effort to bundle out Oman for a below-par 122 after being asked to bowl.

The chase turned out to be a cakewalk for Scotland as they reached the target with as many as three overs to spare.

Skipper Kyle Coetzer made an attacking 28-ball 41 with the help of two boundaries and three sixes, while George Munsey (20) and wicketkeeper-batter Matthew Cross (26 not out) also played good hands.

Towards the end, Richie Berrington struck some lusty blows en route to an unbeaten 31 that came off just 21 balls and was laced with one boundary and three hits over the fence.

Berrington finished off the chase in style, hitting Mohammad Nadeen for a four and a six.

Earlier, Oman lost two quick wickets -- Jatinder Singh and Kashyap Prajapati -- after opting to bat in the must-win game before Aqib Ilyas (37 off 35 balls) and Mohammad Nadeem (25 off 21) stabilised the innings with a 38-run third-wicket stand.

But Scotland pulled things back, removing both Ilyas and Nadeem, who perished in search of one too many just after clobbering Mark Watt over the boundary.

Sandeep Goud (5) and Naseem Khushi didn't help their side's cause either as Oman kept losing wickets at regular intervals to reach 98 for six after 16 overs.

Skipper Zeeshan Maqsood (34 off 30) tried his best to push the scoring rate but Scotland bowlers didn't give Oman batters any leeway.

In fact, Davey's final over resulted in three Oman wickets, including a run out.