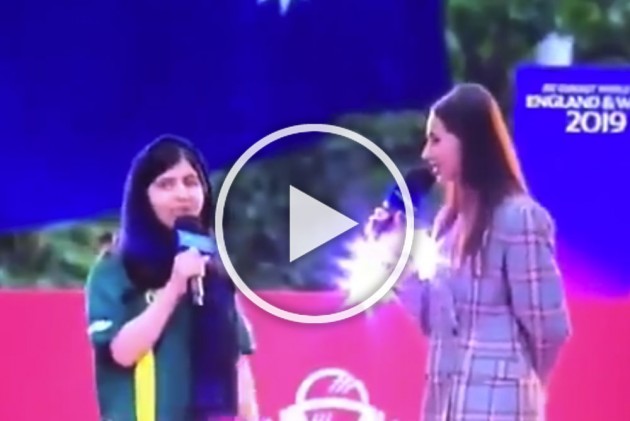 Nobel Prize winner for peace Malala Yousufzai became a target of angry fans after the Pakistani activist mocked India at the opening ceremony of the ICC Cricket World Cup 2019 at Buckingham Palace in London on Thursday.

After the tournament, a playful Yousufzai said to presenter Shibani Dandekar that "Pakistan, we were okay, not too bad. We came seventh. But at least we were not last like India."

You praise Pakistan, a nation where you can't go.
You demean India like a typical brainwashed Pakistani, yet India is a nation which you can safely visit.
Stop being petty and disgusting @Malala. pic.twitter.com/MGugFTKCfV

Yousafzai is the youngest Nobel Prize laureate. She was the co-recipient of the world's most famous peace prize in 2014.

But Indian fans took exception to the comment and target Yousufzai. Here are some reactions:

Pakistan which gave bullets to .@Malala is still prioritized by her n India which admired her courage n supported her uninhibited gets condemned by her!This is d true nationalism n a lesson for all those living in India who condemn d nation even 4 perceived threats. Kudos to her! https://t.co/gHKntxPVYW

Demeaning India like a typical Pakistani. Stop being petty and disgusting @Malala pic.twitter.com/Arr6iLocnU

An essential condition for winning a nobel for peace is to rise above petty and hateful nationalism. You clearly don't deserve the award @Malala

Feel free to block me like you block anyone who points out your hypocrisy ðÂÂÂÂÂÂÂÂÂÂÂÂÂÂÂÂÂÂÂÂÂÂÂÂ  pic.twitter.com/rzNNSIQwfY

Typical Pakistani mindset from this overrated malala.
She is happy that India came last.
She doesn't even have the courage to live in her country,yet she takes on India here.
Where was she when teenage Hindu girls in Pakistan were forcefully converted to Islam and married?#CWC19 pic.twitter.com/mUjL8F8IOg

India will take on Pakistan on June 16 at Old Trafford, Manchester. India have never lost Pakistan in an ICC Cricket World Cup.