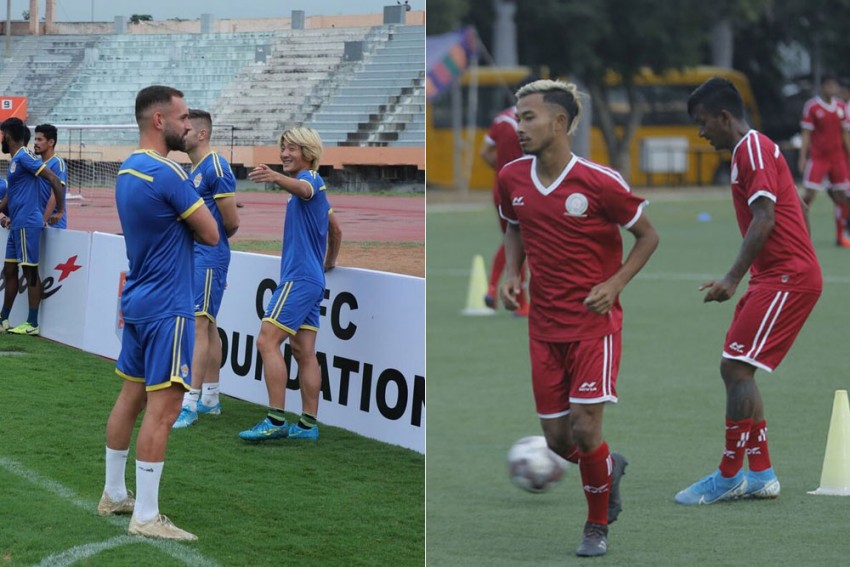 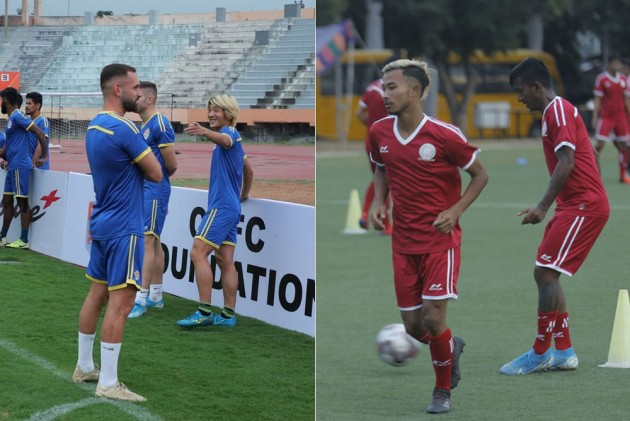 In a lacklustre I-League encounter, defending champions Chennai City FC beat debutants Tiddim Road Athletic Union (TRAU) FC at the Nehru Stadium, Coimbatore on Sunday. Adolfo Miranda scored the all-important goal for the winners. Pedro Javier Manzi, who won the golden boot last season, along with Katsumi Yusa, ran the show at Coimbatore. For the visitors, Abednedo Kofi Tettteh was the standout player in an encounter which witnessed players struggling to keep the pace after a bristling start. As the match progressed, players from either side dropped like flies. Frequent interruptions disrupted the flow, and coupled with poor quality of play, it was a forgettable match. Catch highlights of the match here.

90+5' - Pedro Javier Manzi forces another good save from Gurpreet Singh. Corner for Chennai. TRAU make a good counter, and win a corner. Santana collects it. And that's all.

90+3' - Agustus Williams is angry. Starts a good move inside the attacking third, but the offside flag is up. That's a good chance for TRAU.

90+2' - Sub for Chennai, as expected. Jockson Dhas off, Ranjeet Singh Pandre on.

90' - Chennai still enjoying better moves. But their latest move ends up as a goal-kick for TRAU. Jockson Dhas is down. And five minutes added one. It could have 10 with so many interruptions.

88' - Another great chance for Chennai, and who else. Pedro Javier Manzi wins the ball inside the TRAU box and tries to link up with one of his team-mates. Then some desperate defending save TRAU. Meanwhile, Khundongbam Krishnanda comes in for invisible Tonmoy Ghosh.

86' - Players are literally walking. A long ball from the back of Chennai half. And a throw-in for the hosts in the attacking third. And another one. This contest is now reduced a farce.

85' - Shem Marton Eugene on for injured Pradison Mariyadasn. Jockson Dhas on a free run on the left flank. A poor delivery. Then, another player on the ground. It's Marcel Silva Sacramento. But's fine. Chennai's Charles Anandraj Lourdusamy is also in struggling.

81' - TRAU win a free-kick some 18 yards from Chennai goal. From the set-piece, they win a throw-in. And off-side on the right flank. And cramp endemic strikes again. A Chennai player is down. It's Pradison Mariyadasn, and is stretchered off.

79' - A ball finds Pedro Javier Manzi, and the skipper wins a corner. Manzi is everywhere. He goes for an acrobatic attempt. Forces a save from Gurpreet Singh. And second change for TRAU. Roger off, Deepak Devrani in.

75' - Yendrembam Denechandram Meitei, on the left flank, is making some runs. In the latest move, sets up Agustus Williams to go for the goal. But from a goalmouth melee, TRAU miss the chance to equalise, missing the near post.

73' - Another very good from Chennai with Katsumi Yusa on the ball, but a goal kick. Jockson Dhas is down and Yusa is helping his teammate stretch.

71' - Marcel Silva Sacramento starts a move and links up with Wahengbam Angousana Luwang on the right flank. Angousana sends in a cross, but clearance from a Chennai defender. The long ball forward forces TRAU goalie to leave his line to clear it.

69' - Pedro Javier Manzi sends in a high cross with lots of swerve and Mashoor Shereef Thangalakath's header misses the near post. Goal kick. Meanwhile, Abednedo Kofi Tettteh gets up very gingerly after spending some time on the floor. He's off the ground.

67' - Into the final 25 minutes of regulation time and Marcel Silva Sacramento lets a long ranger fly. And it misses the target, flies over the bar. Chennai goal kick. And Mashoor Shereef Thangalakath gets a bad knock on the back. Free-kick to Chennai.

65' - Roger and Williams are now operating in deeper roles as TRAU change formation. But still, they are having difficulties making any meaningful move. Chennai, on the contrary, are having a good time. No major concerns as of now for their defenders.

62' - A brief spell for TRAU. Eslava and Santan in a mix up as TRAU press hard. No harm done though.

59'- A blistering run from Katsumi Yusa and sends it a brilliant cross but Mashoor Shereef Thangalakath completely misses it. His header fails to hit the target. An open goal at that too.

57' - A desperate lunge from Ajith Kumar to keep the ball in play, but unsuccessful. Agustus Williams on the ball, but once again fails to find a teammate. TRAU forward is having a very poor game.

55' - Yellow card Eslava. Chennai defender lashes out at the referee after committing a foul.

52' - Then, TRAU almost find the equaliser with Ghanian Abednedo Kofi Tettteh with a brilliant attempt. But his effort just misses the near corner. Chennai goalie Nauzet Carcia Santana is fuming. That's poor defending from Chennai to let Tetteh go for the goal.

50' - GOAL! Only few minutes into the second half, and one mistake from TRAU by Patrick Oguchi Uche and Chennai score with skipper Pedro Javier Manzi Adolfo Miranda slotting home.

48' - A brisk start. And TRAU are having a good start. Moirangthem Loken Meitei just sends in a floater. Then Abednedo Kofi Tettteh commits another foul, not booking yet.

8:00 PM IST: Defending champions Chennai FC, as expected created lots of chances, but TRAU held firm with some smart defending. And in the heart of it was Abednedo Kofi Tettteh, who played that holding role with brilliance. TRAU's play revolves around him. For the hosts, skipper Pedro Javier Manzi and NEROCA star, Katsumi Yusa have been brilliant so far. On the right, Mashoor Shereef Thangalakath got some good runs. But it's nil-nil so far.

45+1' - A move from the left flank and waiting Katsumi Yusa's attempt gets deflected for a corner. The Japanese takes the corner and a goal kick. Chennai claim for another corner, but the referee says no. And that's all for the half.

44' - Ajith Kumar, on the right flank, gets on with a good run, then sends in a cross. Gets blocked, for a corner. Agustus Williams clears the danger for TRAU with a header, then a missed chance for Chennai. Sails over the bar. A minute added on.

43' - Katsumi Yusa draws a foul. Free kick for Chennai inside the TRAU half. Sriram runs into Kofi Tetteh. And a throw-in for TRAU.

42' - TRAU win a free-kick near the centre on the right flank. But ends up conceding a free-kick to Chennai some five yards inside the hosts half. A long ball, and Pedro Javier Manzi goes for the goal. But misses the target. Goal kick for TRAU.

40' - A long ball for Chennai and skipper Pedro Javier Manzi is caught off-side.

38' - A loose for Chennai, and TRAU start another move from the back then Marcel Silva Sacramento wins a corner.

35' - TRAU win a throw-in inside the Chennai half after a Mashoor fails to control the ball. But fails to make the most out of it. Chennai regain possession.

34' - TRAU, as of now, are sitting deep. Abednedo Kofi Tettteh, once again, commits a foul. Free-kick for Chennai. Mashoor Shereef Thangalakath wins a corner for Chennai.

31' - On the counter, Wahengbam Angousana Luwang and Moirangthem Loken Meitei trouble Chennai defence. Then, Ajith makes the all-important clearance. But in the process, hurts his leg. Down.

30' - Another corner for Chennai, on the opposite side. Curling delivery and the ball bobbing inside the box. Then, Abednedo Kofi Tettteh makes a clearance. Then, a header hits the bar and a goal-line clearance from TRAU. A flurry of set-pieces for Chennai.

25' - Goal kick for Chennai after a brilliant move from TRAU.

23' - Patrick Oguchi Uche blocks a low volley as Chennai continue with a series of attacks. It's followed by a run from Katsumi Yusa, but the Japanese failed to beat a TRAU defender. Goal-kick.

21' - Vital defensive work from TRAU to thwart a move started by Sriram. Then another free-kick for Chennai near the centre.

20' - Katsumi Yusa tries to curl it but a wild attempt, to say the least. Goal-kick and TRAU get a foul.

19' - Throw-in for Chennai with Ajith Kumar on the ball. But the hosts lose possession, then TRAU give away the ball in a hurry. A foul for Chennai just outside the box.

15' - A patient build-up from the defending champions. Applying the same template that helped them win the league last season. Katsumi Yusa is running the show so far.

13' - Wahengbam Angousana Luwang's service from corner fails to to find his intended target and Chennai breath a sigh of relief.

12' - Good defensive work from the visitors with Katsumi Yusa trying to cut inside from the left. Then, TRAU present themselves with a shot. Misses the near upright, but a corner.

10' - Abednedo Kogi Tettteh commits a foul, and in a blink, Chennai almost open the scoring with Pedro Javier Manzi getting the warning shot from close range. It's close. Manzi's header sails over the bar.

9' - First meaningful attack from Chennai with Katsumi Yusa going for the goal. It misses though.

7' - Sriram tries a long ranger from inside Chennai half. But misses the target.

6' - Moirangthem Loken Meitei on the ball, but his is out of space and goal kick for Chennai City. Then, Katsumi Yusa helps himself with a long ball.

5' - Free-kick for TRAU, then a good clearance Katsumi Yusa. It's followed by a Pedro Javier Manzi run on the left flank.

2' - No real nerves from the debutants, TRAU. Keeping things simple. In fact, they got the first real attempt on the goal, from a rather lucky move.

1' - Early pressing from Chennai. But a slow start to say.

6:30 PM IST: A new-look Chennai City FC begin their title defence tonight as I-League welcomes the newest outfit, TRAU FC from Manipur. Chennai have lost some of their key players, like transfers in the form of Nestor Benitez, Edwin Sydney Vanspaul and Tarif Akhand who had formed the core of the attack and defence last season. So, the general verdict is -- it will not be an easy opening game for the Coimbatore based side. But the presence of Japanese midfielder Katsumi Yusa should serve as a mitigating force. Yes, they still have Spanish quartet - Golden boot winner Pedro Manzi, midfielders Adolfo Miranda and Sandro, and defender Roberto Eslava.

After winning the trophy last season, the hosts have some crucial players in the form of Nestor Gordillo, Edwin Sydney Vanspaul and Tarif Akhand. But all is not lost, as Japanese midfielder Katsumi Yusa has been roped in by Akbar Nawas. The side has retained some of its key players like last season's Golden Boot winner Pedro Manzi, defender Roberto Eslava and midfielder Sandro. A lot will be expected from the trident of Manzi, Sandro and Yusa.

Ahead of the match, Manzi (captain) said that Chennai are prepared for the new season and have worked hard in the preseason. "We are looking forward to the league, working hard for a pre-season of almost four months. We know we are a new team with young and many players without experience in I-league," he said.

"I believe this season is going to be even more difficult than the previous one. The teams have been reinforced and are stronger but we will work together to defend the title," he further added.

Debutants TRAU (from Imphal) will be walking in strange waters, and will be aiming to use their unpredictability to their own advantage. The side will be relying heavily on Nigerian forward Princewill Emeka Olariche. He will be supported by Marcel Sacramento and Abhinas Ruidas and Loken Meitei.

Speaking ahead of the match, Olriche said, "We have made a lot of additions to the squad, mostly experienced players, both foreigners and Indians. We have a superb technical team and we are playing a fantastic brand of football. We are ready and we are anticipating a great season ahead."