Juventus suffered another setback in their bid to rein in Serie A leaders Inter as they could only draw 1-1 at Hellas Verona on Saturday. 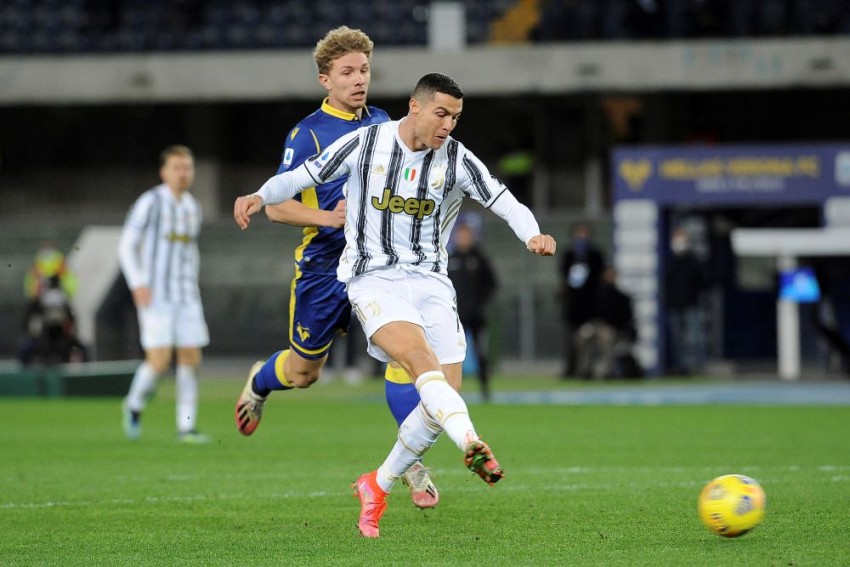 Cristiano Ronaldo's shoots the ball for his 0-1 goal during the Italian Serie A match between Verona and Juventus at the Bentegodi stadium in Verona, Italy, on Saturday.
Paola Garbuio/LaPresse via AP
Omnisport 2021-02-28T08:29:09+05:30 Hellas Verona 1-1 Juventus - Serie A Champions Frustrated By Barak Leveller 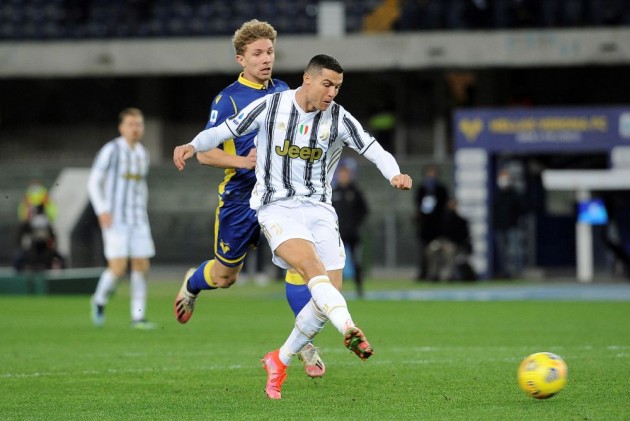 Juventus suffered another setback in their bid to rein in Serie A leaders Inter as they could only draw 1-1 at Hellas Verona on Saturday. (More Football News)

The defending champions are third but had the opportunity to close within five points of the frontrunners ahead of their game the following day.

Although the Bianconeri were made to work hard by Verona, they looked to be on course when Cristiano Ronaldo netted his 26th goal of the season early in the second half.

But Antonin Barak's header gave Verona a point they deserved, extending their unbeaten league run against Juve to three matches for the first time since the 1980s.

Juve made a rapid start and Aaron Ramsey had a low shot touched wide, but the best attempt of the first half soon followed at the other end as Wojciech Szczesny turned Marco Faraoni's header onto the crossbar.

The pace of the game slowed thereafter, although Marco Silvestri was asked to push away a Federico Chiesa effort.

The breakthrough goal arrived four minutes into the second period when Chiesa turned provider and squared to Ronaldo, whose finish slipped beyond Silvestri.

Juve failed to build on that strike, though, and Verona recovered a foothold and eventually parity as Barak towered over Alex Sandro from substitute Darko Lazovic's cross.

Verona looked the more likely to forge a winner, with Szczesny expertly denying Lazovic, but they settled instead for a point that means Juve are winless in three on the road in all competitions.

What does it mean? Juve on the end of a late show

Verona had scored only three goals in the final 15 minutes of Serie A matches this season before Barak boosted that tally with his header in the 77th minute.

Juve lead the league in that regard, with 14 late goals, but they scarcely threatened a winner after being pegged back.

While Andrea Pirlo's side had not drawn a league match since a run of six in 10 games ending on December 16, this was another setback they could ill afford.

Introduced three minutes after Ronaldo put Juve in front, Lazovic helped turn the match on its head - and he might have won it.

The substitute attempted three shots, as many as any Verona player, and also created three chances, including Barak's equaliser.

After scoring twice in a win against Crotone on Monday, Ronaldo was on target again. With four assists also to his name this term, he has 30 goal involvements in all competitions.

This is the 15th successive season in which he has been involved in at least 30 goals at club level, but the forward cannot do it all alone.

14 - Only Haaland and Salah (both 16) have scored more than Cristiano Ronaldo (14) in away matches in the current season in the Top-5 European Leagues (all comps). Machine#VeronaJuventus

Juve are back in Serie A action on Tuesday when they host Spezia, while Verona visit Benevento 24 hours later.