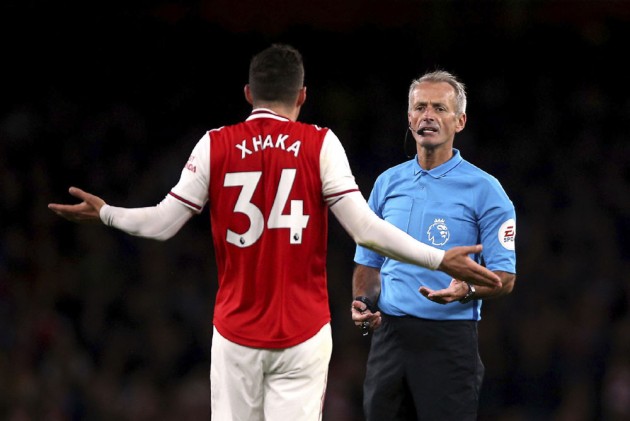 Hector Bellerin has called for unity at Arsenal in the wake of Sunday's confrontation between Granit Xhaka and Gunners fans during the draw with Crystal Palace. (More Football News)

Unai Emery's side surrendered a 2-0 lead to tie 2-2 with Palace at Emirates Stadium to fall four points adrift of the Premier League top four.

The match was controversial due to the use of VAR to award the visitors a penalty after Wilfried Zaha had initially been booked for diving, and then to disallow a potential late winner from Sokratis Papastathopoulos.

It was Xhaka's substitution that proved to be the main talking point, though, with the Arsenal captain withdrawn 61 minutes in to ironic cheers and then boos from sections of the home fans.

Xhaka responded by appearing to mockingly encourage the supporters to boo more loudly before pulling his shirt off as he reached the dugout, having sworn while making his way from the pitch.

The Switzerland international was deeply upset by the incident, according to a report in The Athletic, while head coach Emery said the club will consider taking action after describing his player's actions as "wrong".

Bellerin has since issued something of a rallying cry by calling for Arsenal fans on social media to show some understanding towards Xhaka and get behind the team.

"We are all humans, we all have emotions, and sometimes it's not easy dealing with them," he wrote. "It's time to lift each other up, not to push each other away. We only win when we are together."

We are all humans, we all have emotions, and sometimes it's not easy dealing with them. It's time to lift each other up, not to push each other away. We only win when we are together. #COYG pic.twitter.com/dkDI7M3xew

Aside from the Xhaka controversy, the match placed Emery's position under further scrutiny, with the Gunners having won only two of their past eight league matches.

They head to Liverpool in the EFL Cup on Wednesday before hosting Wolves in their next league fixture on Saturday.