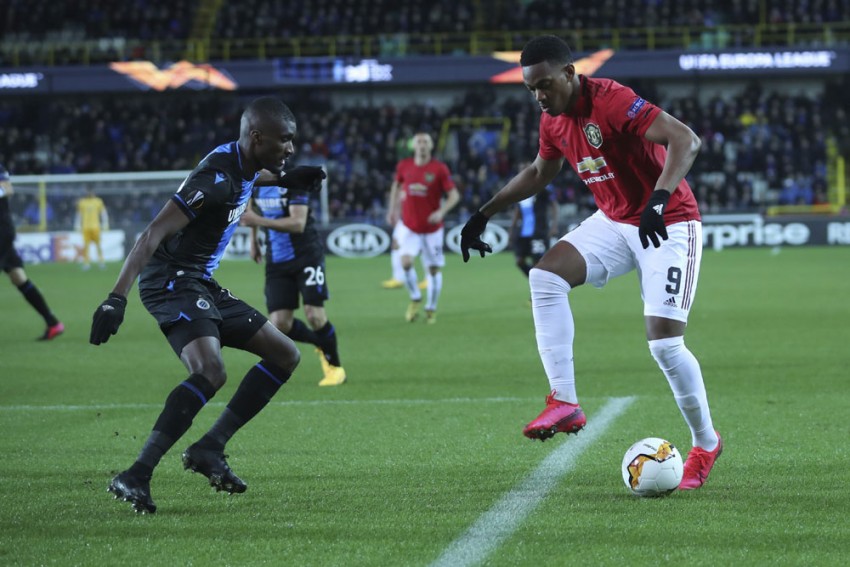 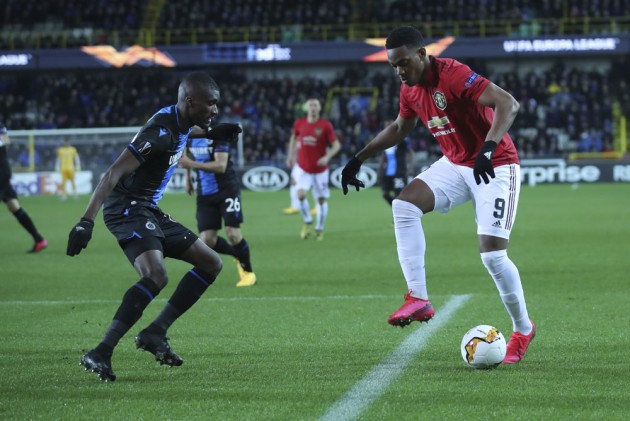 The France international cancelled out an opening goal from Emmanuel Bonaventure Dennis to give Ole Gunnar Solskjaer's side a slight advantage heading into the return game at Old Trafford.

Solskjaer made six changes to the team that won 2-0 at Chelsea on Monday, and it was one of the fresh starters, goalkeeper Sergio Romero, who was at fault for the opening goal.

Brugge, who drew 2-2 at Real Madrid in the Champions League group stage and only narrowly lost to Paris Saint-Germain, were good value for their lead until Martial capitalised on a defensive mistake and a fast pitch to run through and make sure the game finished all square.

Andreas Pereira had United's first attempt after 14 minutes, with Simon Mignolet pushing his low effort past the right-hand post.

The Red Devils found themselves behind just a minute later. Dennis raced onto a Mignolet goal kick and, with Romero having strayed foolishly far from his line, the forward lobbed the ball over the United keeper, who could only watch it bobble into the net.

1 - Simon Mignolet is the first goalkeeper to provide an assist in the Europa League since Guilherme for Lokomotiv Moscow against Sporting Lisbon in September 2015. Launch. pic.twitter.com/lM0cNfpTmh

United were stuck in first gear and Romero had to be well-positioned to deny Dennis a second from close range after the visitors failed to clear from the edge of the box.

Brugge's lead looked comfortable until they handed United an equaliser. Maxim De Cuyper's throw-in from inside the opposition half bounced away from Brandon Mechele, and Martial pounced, driving towards goal and slotting the ball past Mignolet.

Martial nearly scored a second before the break, shrugging off De Cuyper before blasting a left-footed shot that Mignolet just tipped onto the post.

Chances were scarcer in a second half mostly bereft of quality, although Odilon Kossounou scuffed wide from eight yards out when he really should have at least tested Romero.

United finished strongly but could not carve out a chance for a winner, leaving the tie nicely poised ahead of next Thursday's return fixture.

What does it mean? United will be thankful for draw

Having played just three days ago and been met with dreadful weather conditions in Bruges, this is a result with which Solskjaer will likely be quite content.

It was a game short on quality throughout, not helped by the playing surface, but Martial's excellent finish will leave the Red Devils feeling as though they have the edge.

Martial leading from the front

Martial's clinical finish put United ahead at Chelsea, and he showed similar composure to snatch an away goal just when Brugge looked to be in control of the first leg.

Brandon Williams had plenty of defending to do against a Chelsea team that targeted United's left, so it was surprising to see him keep his place. He looked as though a rest might have done him good.

- Club Brugge's Emmanuel Bonaventure Dennis' opener against Manchester United ended the Red Devils' run of 408 minutes without conceding in all competitions.
- Manchester United forward Anthony Martial has been directly involved in four goals in his past four appearances on the road in all competitions (3 goals, 1 assist), as many as in his previous 10 games.
- Simon Mignolet is the first goalkeeper to provide an assist in the Europa League since Guilherme for Lokomotiv Moscow against Sporting Lisbon in September 2015.
- Club Brugge are winless in their past 11 meetings with English sides in all competitions (D3 L8) since a 1-0 win against Chelsea in the 1994-95 Cup Winner's Cup quarter-final.
- United are unbeaten in their past four away games in all competitions (W3 D1), their longest unbeaten streak on the road since March 2019, when they won nine in a row.

The second leg takes place on February 27. Before then, United host Watford in the Premier League on Sunday, while Brugge face Sporting Charleroi at home.