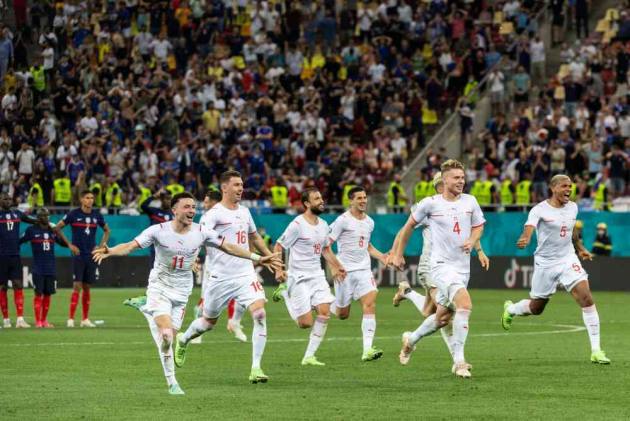 ~ France have failed to reach the quarter-final stage of a major tournament (Euros/World Cup) for the first time since the 2010 World Cup.

~ Switzerland have reached the quarter-finals at a major tournament (Euros/World Cup) for the first time since the 1954 World Cup, while this was their first ever penalty shootout victory in either competition.

~ Switzerland have scored 3+ goals in consecutive major tournament matches (Euros/World Cups) for the first time since the 1954 World Cup.

~ There were just four minutes and three seconds between Hugo Lloris’ penalty save and Karim Benzema’s second goal of the game to put France 2-1 up.

~ Karim Benzema became only the second player to score 2+ goals in consecutive games with France at the European Championships after Michel Platini in 1984 (3 goals v Belgium and 3 goals v Yugoslavia in the group stage).

~ Hugo Lloris became the first goalkeeper to save a penalty for France in major tournament game (Euros/World Cup) since Fabien Barthez in 2004 v England (exc. shootouts).

~ Four of Paul Pogba's last five goals for France have come from outside the box, including each of the last three.

~ Switzerland’s Steven Zuber provided his fourth assist at EURO 2020, no player has ever provided more at a single European Championships tournament (since 1980).

~ Haris Seferovic has scored in consecutive major tournament games (3 goals), after scoring just once in his previous 13 appearances across European Championships and World Cups.

~ N’Golo Kante made his 50th appearance for France, with the midfielder ending on the losing side in just four of his 50 games for the national team. (with Inputs from Stats Perform)