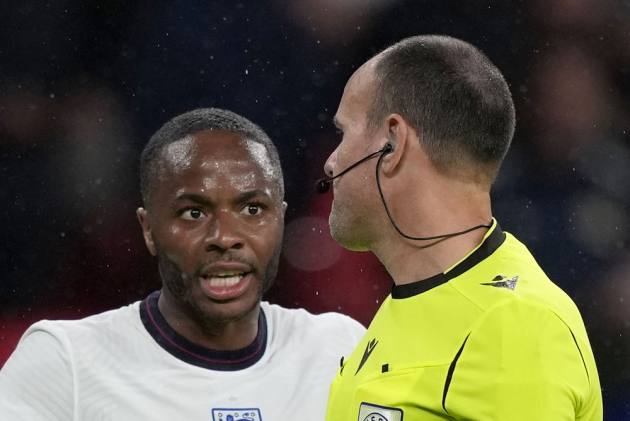 A couple of days contemplating why England hasn’t already advanced at the European Championship allowed Raheem Sterling to fully assess the team's shortcomings.

How could a stalemate with Scotland have been prevented?

"With the ball we could have shown a bit more personality and dominated the game more with the ball," the England striker said.

"As a team we need to know where to identify that and take control. We can't get brought into playing a certain way when we want to use the ball a little better."

Starting on Tuesday, when the team faces the Czech Republic in its Group D finale.

"I do feel there’s a bit of an over-reaction," Sterling said. "I just feel there’s more of a panic on the outside than inside the building. At the same time, the players who have been at a few tournaments, who have huge experience, try to help the other ones."

England can't even blame unfamiliar surroundings for being held to a 0-0 draw by Scotland on Friday after beating Croatia 1-0. All of its group games are at Wembley Stadium.

There will be a return to its home stadium for the round of 16 if England can win and dislodge the Czech Republic from first place. There would be a trip to Copenhagen if England stays in second place.

England coach Gareth Southgate has been trying to relax his players by running through past group-stage records of successful teams. Take Portugal, which drew all three games at the start of Euro 2016 and then won the trophy.

"Sometimes teams that have drawn their first two games have gone on to win so we’ve just got to stay motivated, be happy and enjoy our football."

Sterling hasn't always been able to enjoy his soccer this season. The winger ended up as a Premier League winner again with Manchester City but with frustrations. He played in 31 of the 38 games and had to come off the bench in three of them, netting 10 goals.

"Since a kid, if I'm playing football I am really happy," Sterling said. "If I'm not, I'm not happy."

Sterling has borne the brunt of criticism over the years playing for England, particularly in the last-16 exit to Iceland at Euro 2016. The player singled out for England's struggles against Scotland is Harry Kane.

Southgate has already confirmed that the 2018 World Cup Golden Boot winner won't be dropped for the match against the Czech Republic despite not scoring in both Euro 2020 games or getting a shot on target.

"We as a team, of course, need to produce more for him, more crosses in the box," Sterling said. "He will be the first person to be disappointed but at the same I know when it’s crunch time Harry will be there, that's for sure."

The Euro 2020 scoring chart is topped by an expected name and a less renowned forward. Joining Portugal forward Cristiano Ronaldo with three goals is Patrik Schick ahead of the Czech Republic striker's trip to London.

"We know England have massive quality and top star players," Schick said. "But in their first games they did not create too many chances, maybe they are struggling a little bit in attack.

"But as a team they will be always tough to play against. So we have to prepare as well as we can and of course we want to win, get three points and secure qualification from this group."

It was at Wembley that the Czechs came closest to adding to its 1976 European title, losing the Euro '96 final to Germany. By winning their opening match against Scotland, they have already achieved more than Euro 2016 when they failed to advance from the group stage.

Four points should be enough to be at least one of the four best third-place teams that advances to the round of 16. England is behind the Czechs on goal difference. Scotland and Croatia meet at Hampden Park at the time same on Tuesday, both with one point.