Liverpool will be hoping to maintain their unbeaten Premier League record at Anfield this season, as they face a determined Spurs 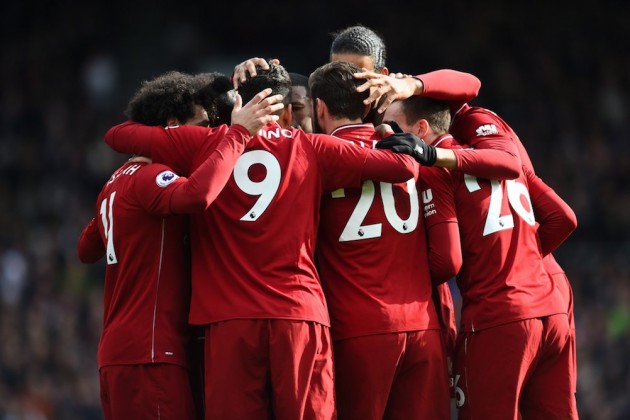 With the English Premier League pacing itself towards the end of the season, the title race between Liverpool and Manchester City intensifies. Liverpool take on Tottenham Hotspur on Sunday, in what will be their biggest hurdle out of the remaining fixtures in their quest to end nearly three decades without a Premier League Title.

Though Jurgen Klopp’s men currently stand first, with a two-point lead over Manchester City, they have played a game more. Liverpool will be hoping Manchester City slip up at some point in their remaining eight games.

However, City faces a tough April schedule as they aim to complete a historic quadruple of trophies and still have to travel to local rivals Manchester United, as well as hosting Tottenham themselves. They also have to travel to Southampton, Cardiff, and Newcastle, who are all battling for survival. Liverpool, on the other side, have a majority of their remaining season at their fortress Anfield, where they have dropped just four points all season.

"They are unbeaten in the Premier League at Anfield, it is going to be a massive challenge," admitted Spurs boss Mauricio Pochettino. "We respect them, they are doing good job."

However, a run of just one point from their last four Premier League games has left Pochettino's men, now 15 points adrift of Liverpool in third, scrambling just to protect their place in the top four.

Three weeks have passed since their last outing for Pochettino to stew over a 2-1 defeat at Southampton and the Argentine wants a reaction at Anfield.

"We are in a very good position in the Premier League and the Champions League, but of course it is not enough" added Pochettino.

Spurs have dropped about 11 points in their last four Premier League games, and they will be hoping for a revival as they take on Liverpool.

"I feel little disappointed because in some periods during the season we were really good and some, like now, we are not showing our real quality."

A trip north kicks off a momentous week for Spurs as they will finally begin life in the club's new 62,000 capacity stadium on Wednesday against Crystal Palace after months of delays.

Pochettino hailed the venue as "the best stadium in the world", but its unveiling at a reported cost of 1 billion has only emphasized the need for Spurs to make sure it hosts Champions League football next season.

However, Klopp believes Tottenham will be buoyed just by the experience of training in their new home this week.

"I think these are exciting times for Tottenham. I saw only pictures of it and it looks pretty impressive," he added.

"We expect the strongest Tottenham you can expect because I heard nothing about any injury problems or whatever. They had a few over the season but not at the moment, so there will be a strong side here. A world-class team will be here."

Indeed, Harry Kane continued his strong comeback from an ankle injury by scoring in both England's comprehensive victories over the Czech Republic and Montenegro.

Kane's streak of 12 goals in 13 matches for club and country has seen him move level with Liverpool's Mohamed Salah and Sadio Mane on 17 Premier League goals, just one behind Man City's Sergio Aguero in the race for the Golden Boot.

Salah pipped Kane to the award last season, but the Egyptian has scored just once in the last 10 games, while Mane has shouldered the goalscoring burden with 11 in as many games.

"I'm sure all the players up there will be looking to get that award, but it's just a bonus. As a striker I'll be trying to help my team as much as possible." “ said Kane.

Liverpool will be aiming to fend off this threat from Spurs as they need the crucial three points in their bag, to pile up the pressure on Manchester City.