Jasprit Bumrah (4/46) and Mohammed Shami (3/28) were the pick of the bowlers as India restricted England to 183 at stumps. Catch the highlights of ENG vs IND here 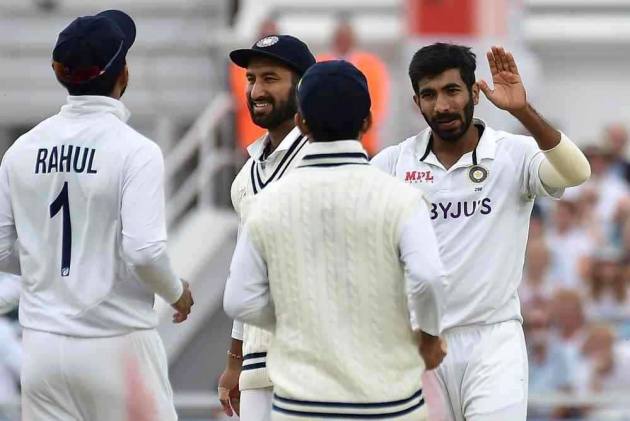 India were 21 for no loss at stumps after bowling out England for 183 on the opening day of the first Test here on Wednesday. Rohit Sharma and KL Rahul were batting on 9 runs each at the close of play as India reduced the deficit by 162 runs in their first innings. Earlier, having reached tea at 138 for four, England lost their remaining six wickets for just 45 runs in the day's third and final session.Skipper Joe Root made 64 off 108 balls, even as the others failed miserably to stand up to the Indian pace bowling attack. For the visitors, Jasprit Bumrah picked up four wickets for 46 runs, Mohammed Shami had 3/28, while Shardul Thakur bagged 2/41. England scored 77 runs in 25.2 overs bowled in the afternoon session for the loss of two wickets, after scoring 61 in the first session. The pitch had enough for the pacers in the first hour of play with the ball swinging and seaming around. With India going in with four pacers, Shardul Thakur came into the side but the one spinner picked was Ravindra Jadeja, who didn't bowl in the first session.  Dropping premier spinner R Ashwin was a big call as he had been well prepared for the series opener with his preparation including a county game. Brief Scores: England 1st innings: 183 all out in 65.4 overs (Joe Root 64; Jasprit Bumrah 4/46, Mohammed Shami 3/28, Shardul Thakur 2/41), India 1st innings: 21 for no loss in 13 overs.
Catch the highlights of England vs India here. (SCORECARD | OLYMPICS AUG 4 HIGHLIGHTS | Day 1 Match Report)

10:05 PM IST: Rohit Sharma and KL Rahul to start India's chase, James Anderson has the ball in hand for England.

8:30 PM IST: At Tea; Joe Root is holding England together with an unbeaten 52.

3:30 PM IST: Dom Sibley and Rory Burns to start the first innings for England, Jasprit Bumrah has the ball in hand for India

3:00 PM IST: Joe Root wins the toss and opts to bat first. Jonny Bairstow and Sam Curran coming in for England.  KL Rahul To open for India. Shardul also in the side

2:50 PM IST: Welcome to the coverage of the 1st Test. Reports from ground suggest, Ishant Sharma may be out of this Test due to injury, Shardul Thakur measuring his run-up with Mohammed Shami and Jasprit Bumrah