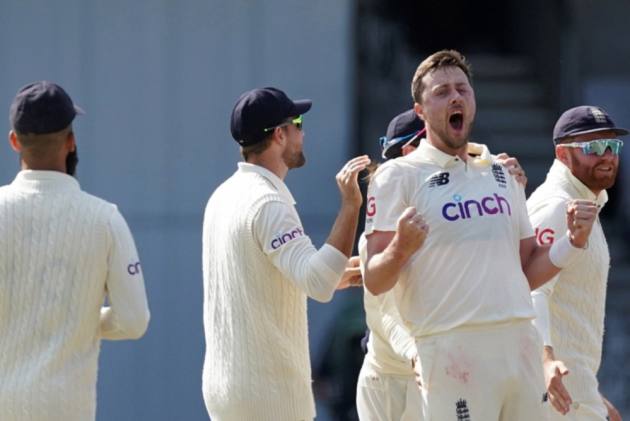 Pacer Ollie Robinson engineered a middle-order collapse with the second new ball as England completed a facile innings and 76 run victory against India on the fourth day of the third Test, in headingley on Saturday. Highlights | Scores | News

All the good work on Friday when India reached 215 for two at stumps was completely undone as Robinson (5/26) and James Anderson (1/26) hit the right lengths and got movement off-the pitch to wrap up the Indian innings in a jiffy.

It was a match that England won by executing their strategies to perfection with an idea of opposition's soft underbellies.

It was Robinson's second five-for in the series and the tall seamer after a difficult initiation to Test cricket due to off-field controversies is proving to be an asset for this team.

Robinson had served an unconditional apology after his racist tweets surfaced on the day of his Test debut against New Zealand in June.

India had lost the match on the first day itself when they were bowled out for 78 as it meant that they were always playing a catching up game in this Test match.

A huge first innings lead of 354 taken by England only increased the worry with three days of batting needed to save the game.

It was an improbable task to bat out three days in conditions which can change rapidly to make batting difficult. Playing out time isn't a virtue that many in this team, save likes of Rohit Sharma and Cheteshwar Pujara, possess.

The middle-order which looked solid yesterday was completely rattled on penultimate morning under bright sunshine as most of the batsmen didn't know where there off-stump was which was pretty baffling if one takes the third day's performance into consideration.

India lost eight wickets for addition of only 63 runs and the memories of a morning collapse in Adelaide once again became fresh as good balls found their way either into the gloves or hands of slip fielders.

It started with Cheteshwar Pujara (91) misjudging the length of Robinson's in-cutter which he perhaps thought would fly over the stumps as he decided not to offer a shot.

A good review taken by Joe Root saw India number three's back but there was still hope for a fight as skipper Virat Kohli clipped Anderson for two boundaries en route his first fifty of the series.

However unlike third evening, the Indian skipper again looked circumspect as he played and missed a few and survived a caught behind chance.

But Robinson then decisively tilted the game with a nicely pitched up delivery that was slightly angled in and Kohli jabbed at it and the result was the fifth consecutive time in this series that he was gobbled up either by wicketkeeper or the slip cordon.

Saturday was slip's turn where his opposite number Joe Root was standing.

Ajinkya Rahane (10) got a couple of boundaries but it was another similar manner of dismissal for the Test vice-captain as Anderson got one to straighten from length which took the outside edge into keeper Buttler's gloves.

Rishabh Pant (1), who is no longer allowed to stand good three feet out of his crease, again played in a manner which only he knows -- giving pacers the charge down the track without any tangible results.

He lasted mere seven balls as he pushed at a Robinson delivery without any footwork, a replica of his first innings dismissal as Craig Overton at third slip took a regulation catch.

From 215 for 2, it was 239 for six and then it was a matter of formality. Ravindra Jadeja (30) added some more runs in Test kitty before Craig Overton (3/47) ended India's nightmare.