ENG vs IND, 2nd Test: KL Rahul Warns If You Sledge One It Means You Are Taking On Whole Team 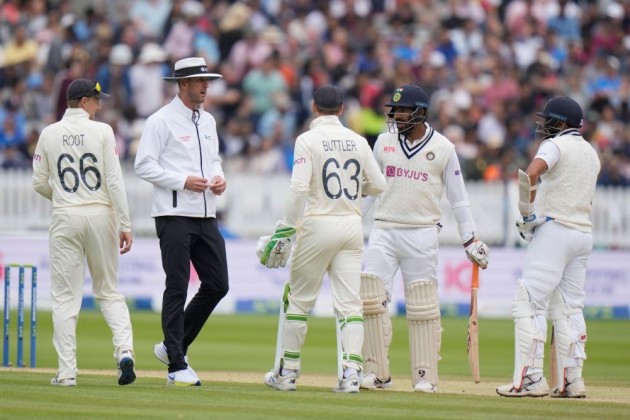 If any rival player tries to sledge one of ours, the remaining 10 would only come hard at the opposition and that's exactly what had happened with England during their 151-run defeat in the second Test, said India opener KL Rahul. Highlights | Scorecard | Gallery | News

The on-field altercations started after Mark Wood dished out short-pitched stuff targeting Jasprit Bumrah's head, resulting in an argument with England skipper Joe Root and Jimmy Anderson. Even rookie Ollie Robinson was having a go at the Indian batters.

However, the tables turned when England were bowled out for paltry 120 in their second innings with India captain Virat Kohli leading the battle of sledges.

"It showed how badly both teams wanted to win. That's how Test cricket is played. We as a team are never shy to say a word or too," player-of-the-match Rahul, who scored 129 in the first innings, said after the match.

"Someone comes after our player and rest of the 10 guys get pumped as well. That's the kind of atmosphere and team bonding that we have. If you go after one of our guys that means you are going after whole team," Rahul said.

He, in fact, made it clear that all the four fast bowlers were ready to give England a test of their own medicine.

"Bowlers were really keen to have a go and have a crack out there in the middle and give it their all in 60 overs. This is what people come to watch and it only speaks about how badly each team wants to win."

He lauded Jasprit Bumrah and Mohammed Shami's record 89-run ninth-wicket stand, which set up the game nicely for the bowlers to do the job inside 60 overs.

"Partnership between Bumrah and Shami was so so good and after they put up a fight like that, bowlers were waiting to have a crack at them. We knew after lunch the declaration is going to come.

"We knew each of them would have to bowl 10 or 12 overs. The pitch was behaving a bit up and down and opportunity like this to win a Test match always doesn't come. We were all very keen and excited and to go out there and put out a performance like that was very special," said Rahul, who has till now scored 244 runs in the series.

The Indian team management didn't use Ravindra Jadeja much, save six overs out of 51.5 bowled during England's second innings.

"We would have used Jaddu a lot more if wickets weren't falling and if the fast bowlers weren't able to do the job. Fast bowlers managed to get wickets each time they bowled and we didn't need to use Jaddu's services that much in this game.

"Going ahead in the series, if there is any spin in the wicket, he will make sure that he picks wickets for us."

Rahul's career went downhill after the 2018 tour of England and the opener spoke about what's been the basic difference from that tour to this one where he has had a century and a 80 plus score in two Tests.

"Last time, I was playing too many shots and I was thinking how I can score runs but this time I just wanted to enjoy batting and focus on role assigned. I didn't want to focus on personal goals. I am enjoying my batting more than forever.

"Last time, I was just thinking about scoring my runs. Now when bowers are in midst of good spell, I am trusting my technique, my defence. This is giving me results," he said.

Rahul loves the fact that he is in control and is able to execute plans with clear mind.

"I think so. I played with a lot of control and discipline and that's what my plan was and what I had prepared for. To go out there and execute the same thing was really satisfying. This will be right up and there and would be memorable for me as its a match winning one. Win at Lord's is always special."