Don't Go By 2-1 Scoreline, It Doesn't Tell How Much India Dominated Australia In Test Series

There are five centuries from the Indian side, while Australia's top score during the four-match series was Marcus Harris 79. 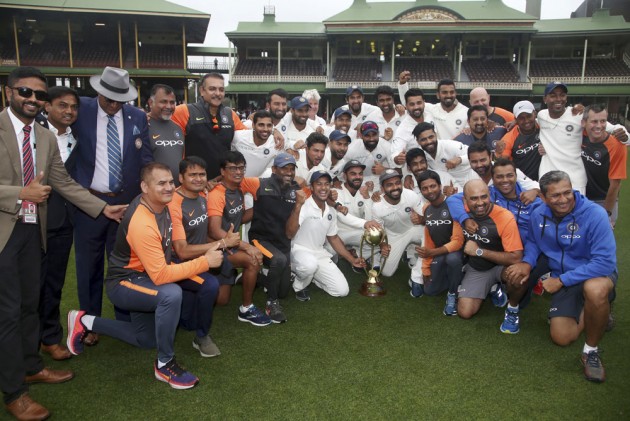 For many, a scoreline of 2-1 in a four-match Test series will surely mean an evenly contested one. But India's historic series win in Australia by the same margin will tell an altogether different story, if one looks deeper – the stats.

Here we look at some intriguing numbers which reflect India's domination over once-mighty Aussies.

- There are five centuries from the Indian side, while Australia's top score during the four-match series was Marcus Harris 79 in rain-affected Sydney Test. Man of the series Cheteshwar Pujara alone hot three, and one each from Rishabh Pant and skipper Virat Kohli.

Kohli Leads India To 1st-Ever Series Win Down Under

Who Said What After India's Maiden Test Series Win In Australia

- The last time India outscored Australia in the century-count was in 2003-04 series when the famed Sachin Tendulkar, Sourav Ganguly, Rahul Dravid, VVS Laxman and Virender Sehwag hit six centuries between them.

- This is the first time in 130 years that not a single Australian batsman has managed to score a hundred in a home Test series of at least four matches. For the record, Australia have produced only one century in 12 months.

- The average score of India's top six is 37 (1547 runs), as against Australia's 27 (1129 runs). It also reflects how contrasting the two sides when it comes to occupying the crease. India's top six clocked over two overs on average but the Aussie top six spent less than 83 minutes.

That brings us to the bowlers:

- Indian pacers' overshadowed their more famous Aussie counterparts. And the telling stat proving it was average runs per wicket. Barring Umesh Yadav who played only one Test at Perth, was below 30, Indian pacers' average was below 30. For Aussies, barring Pat Cummins (27.78), every other bowler average more than 30.

- A pacer's performance is said to be directly linked with the amount of recovery time he gets between the outings. Helping the visiting pacers' cause in this aspect is the fact that Kohli declared Indian innings three times during the series.

Then we have India's many feats:

- India’s first innings score of 622/7 declared was their first 600-plus score in a SENA (South Africa, England, New Zealand and Australia) since 2009.

- India became the first team to enforce the follow-on against Australia in Australia since England did it in 1988. Australia had played 172 consecutive Tests at home without following-on before the SCG Test.

India won the first Test at Adelaide by 31 runs, then the Aussies levelled the series with a 146-run win at Perth. India took the decisive 2-1 lead in Melbourne, winning the Boxing Day Test by 137 and retained the Border-Gavaskar Trophy. Then the fourth Test ended in a draw with inclement weather spoiling India's chances of making it 3-1.