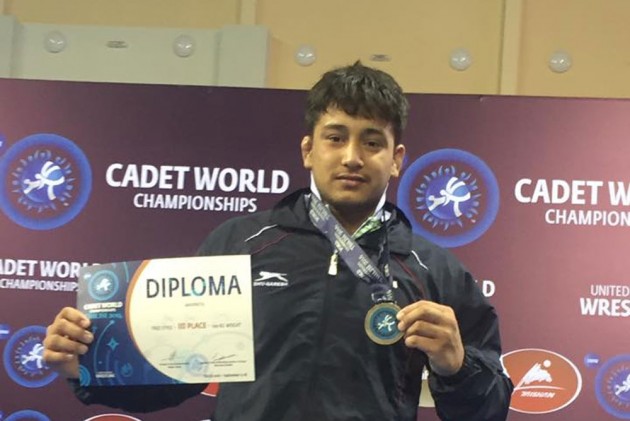 Grappler Deepak Punia on Wednesday became India's first junior World Champion in 18 years after he claimed a gold medal at the junior worlds with a win over Russia's Alik Shebzukhov at Tallinn, Estonia.

The score was tied 2-2 at the end of the 86kg men's freestyle bout but the Indian was declared champion because he had scored the last point.

The last Indians to emerge gold medallist at the Junior World Championship were Ramesh Kumar (69 kg) and Palwinder Singh Cheema (130 kg) who stood atop the podium in 2001.

Before prevailing over Shebzukhov, Punia, who also won a gold at 2016 Cadet World Championship, comfortably defeated Milan Korcsog of Hungary 10-1 in his opening bout.

He then defeated Hunter Lee of Canada 5-1.

In the semi-final Georgia's Miriani Maisuradze 3-2, Punia trailed 1-2 but with just over a minute left he scored two points by pushing his opponent twice to emerge a 3-2 winner.

Punia will also represent India at the upcoming World Championship in Kazakhstan, having won the trails.

In the 92kg, Viky edged out Mongolia's Batmagnai Eenkhtuvshin 4-3 to claim bronze.