Anrich Norte returned with figures of 2/12 in his 4 overs, but more importantly scared David Warner with raw pace in a lethal spell. 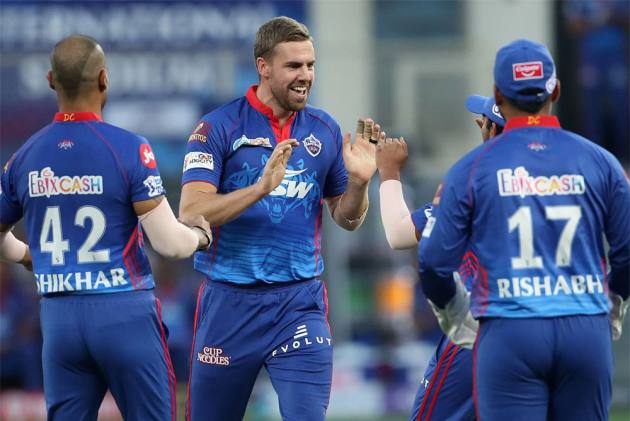 South African Anrich Nortje, with his extreme pace, is a great asset to have as he became the difference between a score of 134 and 160 during Delhi Capitals' eight-wicket victory over Sunrisers Hyderabad, feels winning team captain Rishabh Pant.

Norte returned with figures of 2/12 in his 4 overs, but more importantly scared David Warner with raw pace in a lethal spell as none of the SRH batters were able to handle that extra speed.

"It's a good bowling performance because we thought 150-160 would have been a good total, so 130-something was a good score to restrict them to. We have one of the quickest bowlers in the world so I think they're great assets to have," Pant said at the post-match presentation ceremony.

The skipper was happy that they are carrying the momentum of the first phase.

"We discussed that we had a good first phase, and we are happy to start the second phase this way. We said the same thing about focusing on the process and giving it 100 per cent every day."

Nortje, who missed out the first phase in India, also seemed satisfied with his Player of the Match performance.

"Missing out in the first half was disappointing. It was good to have a good start to the tournament for me.

"Looking at the first game here, it was good to see some grass and then yesterday's big score - didn't know what to expect. It was good to keep things simple in the end."

Asked about Warner's dismissal, Nortje played it down.

"I don't really focus on who I'm getting out, but I'm happy I contributed to the team's win," he said.

SRH skipper Kane Williamson admitted that they were 25 to 30 runs short on this Dubai track.

"We didn't start well, didn't register a decent partnership but never got any momentum, some good scores in the back-end, but pretty much 25-30 runs short. We did bowl well, we have defended modest scores in the past, but it wasn't to be today which was a bit of a shame," Williamson said.

Knowing well that after seven defeats, the chances of play-offs are less than dim, Williamson wants his team to enjoy the rest of the campaign.

"It's been a difficult campaign so far, but we need to enjoy our cricket and don't put ourselves under pressure - they were excellent, they are both quality internationals, two of the best fast bowlers (Nortje and Kagiso Rabada) going around at the moment and they put us under pressure.

"They got us into hard positions, perhaps if we hadn't lost early wickets, we could have done differently, but Delhi were outstanding and played some smart cricket. We need to concentrate on the way we play and try to improve," he added.