Sergio Aguero and Ferran Torres guided Manchester City to a 2-0 win at Crystal Palace, meaning they could be champions by the end of Sunday.

Manchester City could be crowned Premier League champions by the end of this weekend after Sergio Aguero and Ferran Torres secured a 2-0 win at Crystal Palace. (More Football News)

Aguero, City's all-time record goalscorer, will leave the Etihad Stadium when his contract expires next month and has endured a campaign ruined by fitness issues.

But the Argentina striker relocated some of the old magic with a sublime touch and thumping finish to find a 57th-minute breakthrough and his second league goal of the campaign.

There were just 83 seconds between Aguero's opener and Torres' calmly taken second, and City will win the title for a third time in four seasons if Liverpool beat Manchester United at Old Trafford on Sunday.

Raheem Sterling darted onto Aymeric Laporte's lofted pass and inside a couple of Palace challenges, but Mitchell was able to get back for another vital intervention.

Christian Benteke had a chance to breakthrough before the half hour – the Belgian striker's shot on the turn smothered at close quarters by Ederson.

As their phalanx of playmakers rested up on the bench, City struggled for their usual fluency. Gabriel Jesus volleyed home Fernandinho's 36th-minute cross but had strayed needlessly offside.

With attempted intricacy failing, Aguero opted for something more uncomplicated – in terms of conception rather than execution – when he controlled Mendy's low cross then thumped a half-volley past the helpless Vicente Guaita.

City's four-pronged attack went for the kill and Aguero was involved once more in a swarming attack as Torres picked out the bottom left corner from the edge of the area.

As in their 2-1 Champions League semi-final first-leg win at Paris Saint-Germain, City were a team transformed after the break. Sterling thumped Jesus' pass against the base of the post and Benteke made the last-ditch block to prevent last weekend's EFL Cup final hero Laporte from adding to his tally.

Joao Cancelo thundered just over from a Torres backheel and Sterling curled agonisingly wide as Guardiola's men swaggered towards full-time and overall glory. 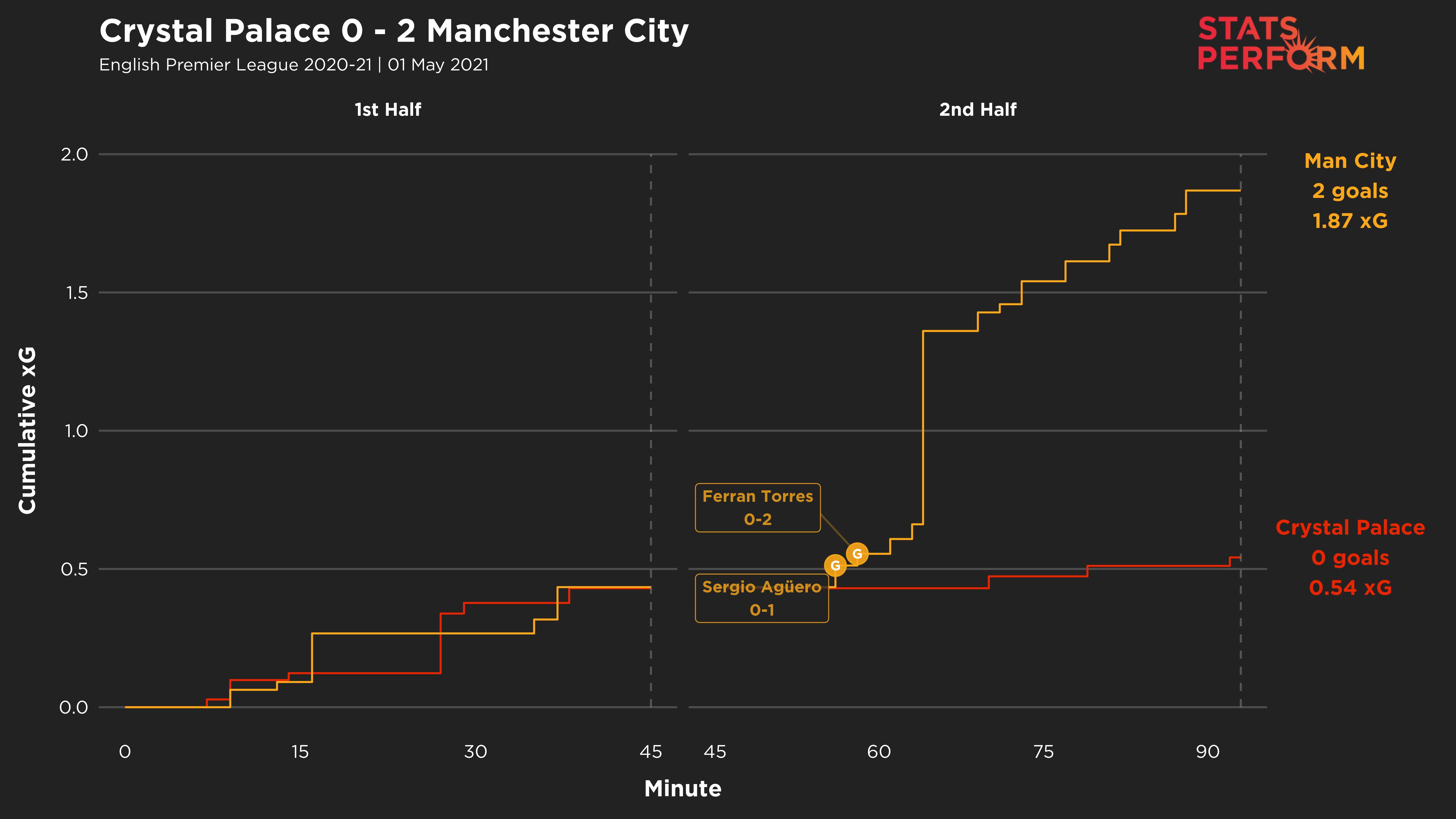 What does it mean? City almost there

When City sandwiched their Champions League quarter-final trip to Borussia Dortmund with an improbable 2-1 loss at home to 10-man Leeds United and a listless 2-0 FA Cup semi-final loss to Chelsea, some of the twitchier members of their fanbase wondered whether Guardiola's squad were set to make a hash of an excellent campaign.

But a 2-1 win from behind at Aston Villa got them back on track and silverware was secured at Wembley against Tottenham before what felt like something of a breakthrough European outing in Paris. Mauricio Pochettino's side will present a stern test once more in Manchester on Tuesday, but Guardiola is on the cusp of the Premier League title in a season that could get even more special.

Aguero closes in on Rooney

Aguero felt his way into this contest but looked like a man determined not to go quietly at City. This was his 182nd goal in the Premier League. Only Wayne Rooney, with 183 at Manchester United, has more for a single club in the competition and it would be an enjoyable mark for Aguero to overhaul in the remaining games, with a fifth winners' medal all-but secured.

Zaha on the margins

City have now won a record-equalling 11 consecutive Premier League away games. If Palace were to derail that charge, they needed some moments of magic from their main men. Unfortunately for Roy Hodgson, he saw Wilfried Zaha well-shackled throughout. The winger did not manage a shot of any description and created a solitary chance for a team-mate.

- Manchester City's second goal of the game was their 700th scored in all competitions under Guardiola, 157 more than any other Premier League side since the Spaniard took over in 2016.
- Raheem Sterling has failed to score and registered just one assist in his last 11 appearances in all competitions for Manchester City, after netting six and assisting two in the nine before that.
- Aguero became the 12th player to have scored at as many as 30 different stadiums in the Premier League, with the City striker now netting at eight different London stadiums in the competition (only Wayne Rooney and Nicolas Anelka with more – nine each).
- No team has conceded more Premier League goals from outside the box this season than Crystal Palace (11, level with Sheffield United).

PSG are up next for City, who host Chelsea next weekend in what both clubs will hope is a dress rehearsal for the Champions League final. With somewhat less jeopardy, Palace are next in action at relegated Sheffield United.