Three-time champions Mumbai Indians (MI) became the first team to register 100 wins in the Indian Premier League (IPL). And they achieved the feat by defeating fellow three-time champions Chennai Super Kings (CSK) in front of home crowd at the Wankhede Stadium in Mumbai on Wednesday.

Hardik Pandya starred with both bat and bowl. First, he hit 25 off 8 balls to change the momentum, then return to take three wickets, including that of MS Dhoni.

11:55 PM IST: Hardik Pandya on with the last over. He started by taking the wicket of Deepak Chahar, but was hit for a six and four off the next two deliveries. A single and a dot. Another dot and convincing win for Mumbai. By 37 runs.

11:53 PM IST: Seven runs from the penultimate over bowled by Jasprit Bumrah. He went wicketless, for figures of 4-0-27-0. Earlier, Lasith Malinga became the most wicket taker against CSK (26), ahead of Harbhajan Singh (24), who is with the Chennai-based team. 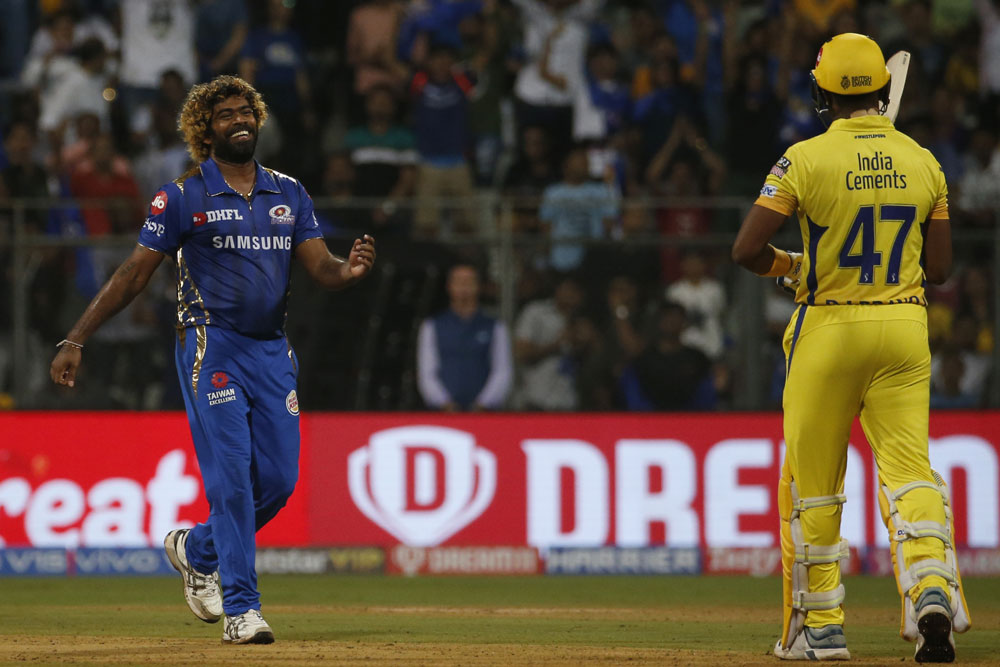 11:41 PM IST: Jasprit Bumrah returns for his third over. Just three singles from it.  In the last four overs, CSK managed to score 28 runs losing two wickets. They need 63 runs from 18 balls. 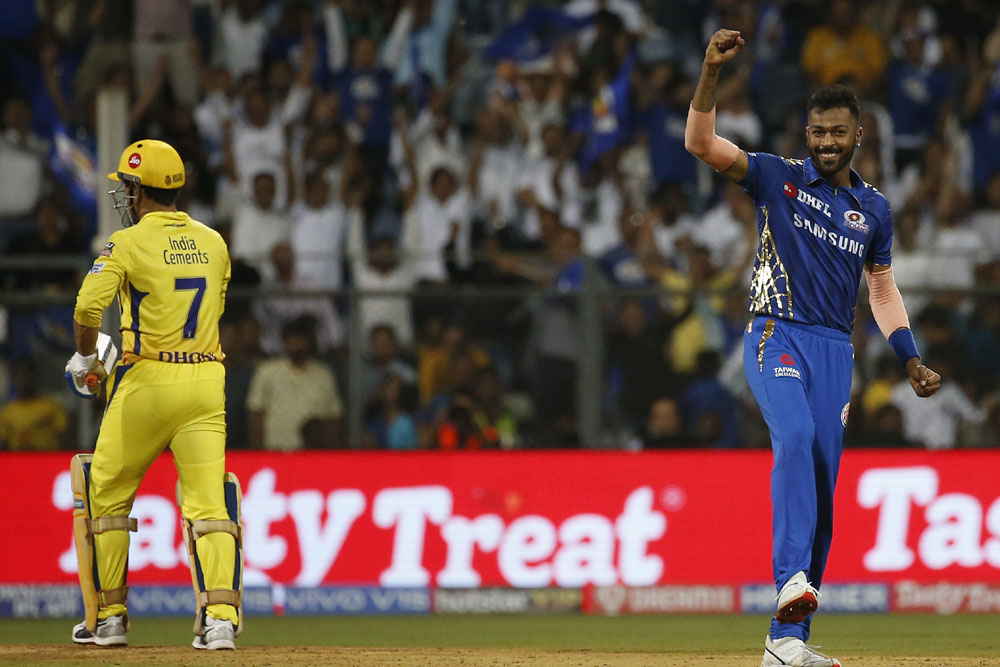 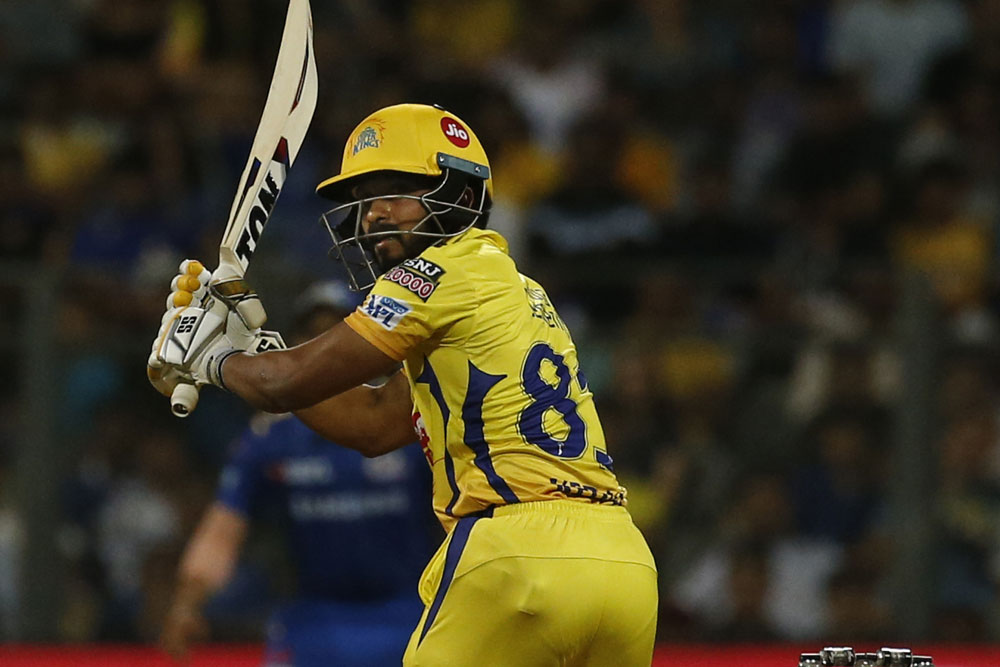 10:54 PM IST: After the time-out, 19-year-old Rahul Chahar gets his first over. First ball to MS Dhoni for a dot. Another delivery and Dhoni opens his account with a single, in four balls. Eight runs from the over. CSK - 57/3 after eight overs. They still need 114 runs from 72 balls.

10:41 PM IST: The fall of Suresh Raina's wicket brought CSK skipper MS Dhoni in the centre. After six overs, the defending champions were 34/3 with Kedar Jadhav on 11 and Dhoni on 0. They need another 137 runs from 84 balls.

10:34 PM IST: A little bourgeoning stand between Suresh Raina and Kedar Jadhav came to an end thanks to a stunning boundary catch from Kieron Pollard. FoW - 33/3 (4.9 Over). Second wicket for Jason Behrendorff. Raina made 16 off 15.

10:13 PM IST: CSK lose another wicket, this time Shane Watson. Lasith Malinga had the Aussie caught at point by a jumping Kieron Pollard. FoW - 6/2 (1.2 Over). 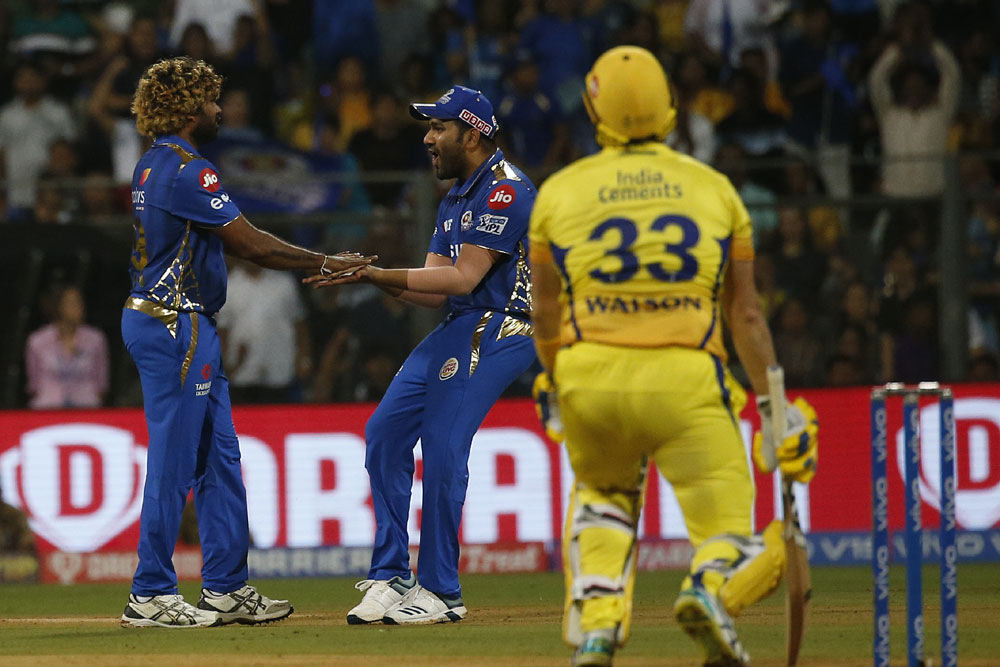 10:00 PM IST: What an innings it was from Krunal Pandya. One four and three sixes in an eight-ball knock for 25 runs. And 45 from 13 balls for the sixth wicket with Kieron Pollard. 29 runs from the last over. That's the kind of hittings champion players can invoke when needed. 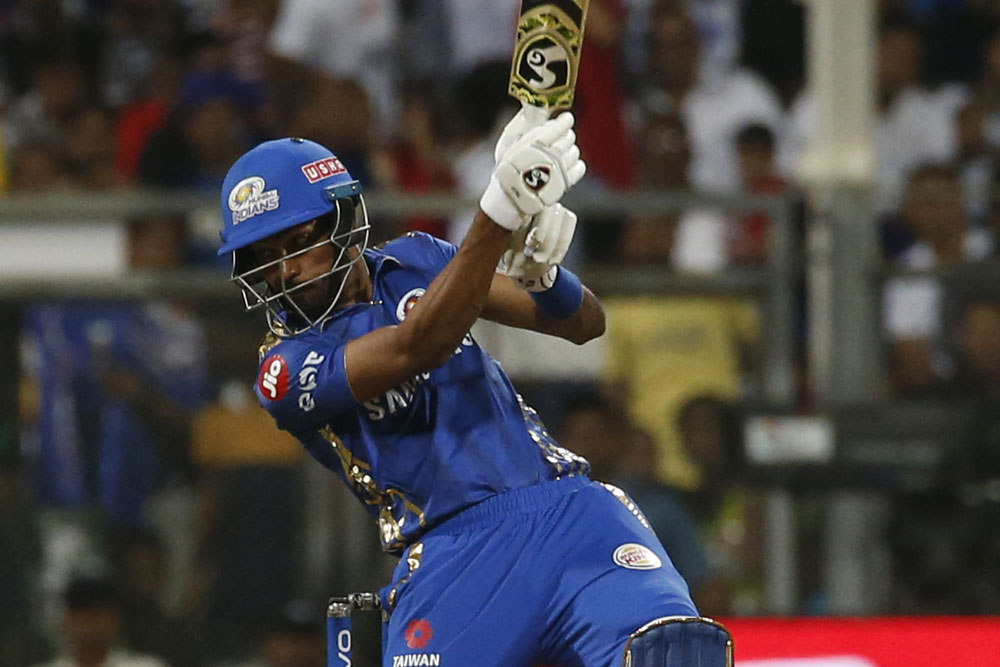 9:52 PM IST: Dwayne Bravo on with the last over. Two singles and a wide, then a no-ball for height which was hit for a six over deep mid-wicket. Kieron Pollard swung hard and rare three runs off the reloaded delivery. Hardik Pandya hit the next ball for a six, a helicopter shot in front its inventor, over cow corner. Another four, to the extra cover boundary. Pandya finished off with a six. 29 runs from the over. 25 off just eight for Hardik Pandya. MI-170/5.

9:45 PM IST: 16 runs from the penultimate over, bowled by Shardul Thakur. Hardik Pandya hit the first ball for a six, then Kieron Pollard hit the fifth ball for another. A couple of wides in between too. Thakur's spell completed, for figures: 4-0-37-0. MI - 141/5. 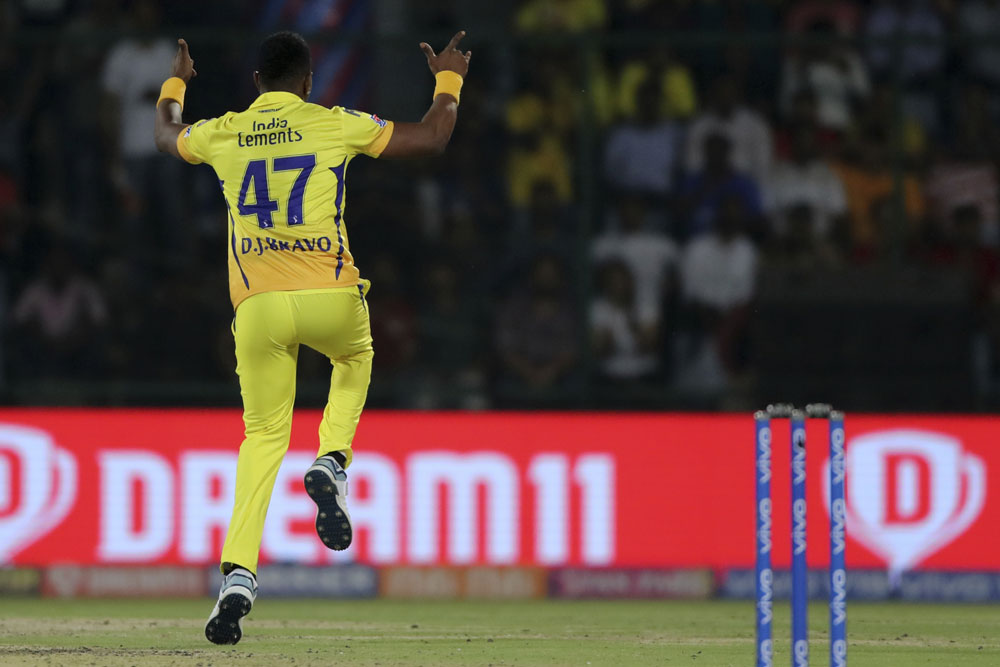 9:31 PM IST: Krunal Pandya hit Mohit Sharma for back-to-back fours before getting out. Caught by Ravindra Jadeja at long off. He made 42 off 32 with five fours and a six. 112/4 (16.4 Over). That happened off the fourth ball of the 17th over. Suryakumar Yadav dismissed the next ball for a six, over square leg boundary. And fifty for him. 16 runs and a wicket from the over. MI - 119/4 after 17 overs. 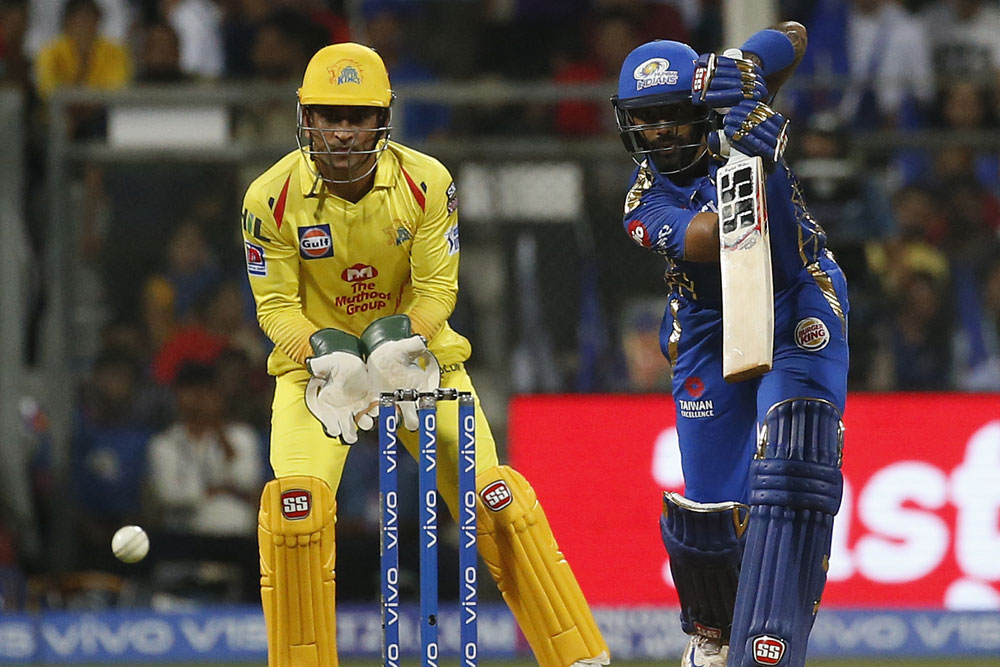 9:12 PM IST: Big shout for an LBW and given. Krunal Pandya, after consultation of Suryakumar Yadav, takes a review. A flicker of a spike on UltraEdge, and the Mumbai batsman survives. Then, a brief stoppage of play as Suryakumar wants adjustments to sightscreen positioning. Shardul Thakur also needed some medical attention, in between, with team physio applying ointment on his palm. It was hit while stopping a well driven straight drive. Four runs from the over. Shardul remained wicketless. His figures after three overs: 0/21. MI - 82/3 after 14 overs.

9:04 PM IST: Poor fielding from Mohit Sharma. He drops Krunal Pandya at mid-off, off the fifth ball of 13th over. Dwayne Bravo concedes four runs in first over. It could easily go with a wicket. In the previous over, Mohit leaked 10. MI - 78/3 after 13 overs.

8: 58 PM IST: 24 runs and a couple of wickets in the last five over CSK take control of the proceedings in Mumbai. For MI, the presence of Suryakumar Yadav will be crucial to their fortunes. He is unbeaten on 34 off 26 with the help of six fours. He's got Krunal Pandya's partnership. MI - 64/3. 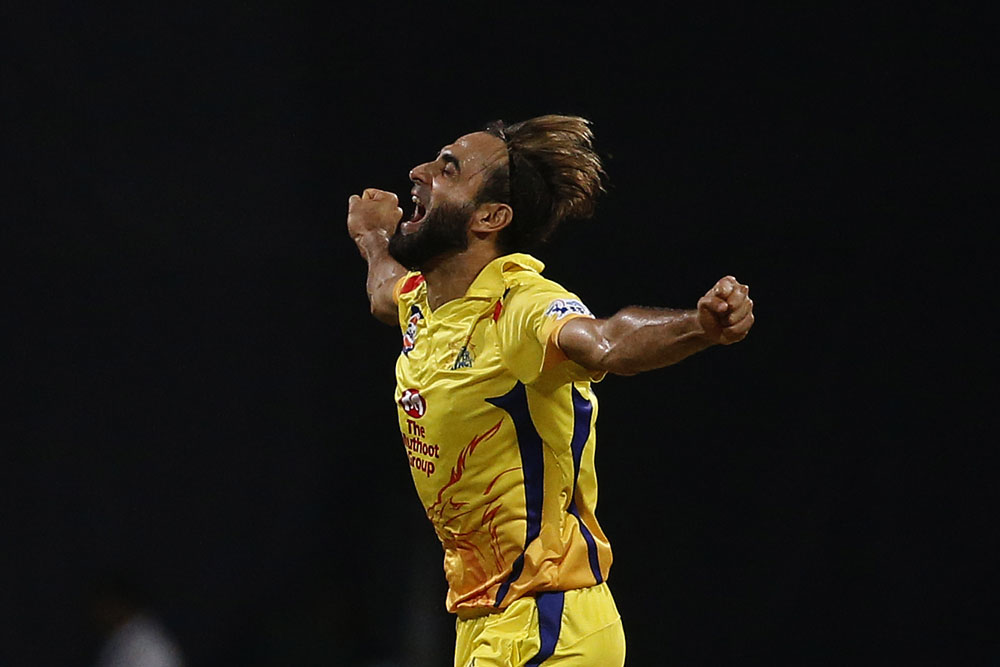 8:43 PM IST: Another bowling change, another wicket. Imran Tahir strikes in first over. Yuvraj Singh fails to curb his enthusiasm for sixes and paid the price. Caught at long off by Ambati Rayudu. Couple of replays to check the validity of the catch. FoW-50/3 (8.3 Over). Time-out. 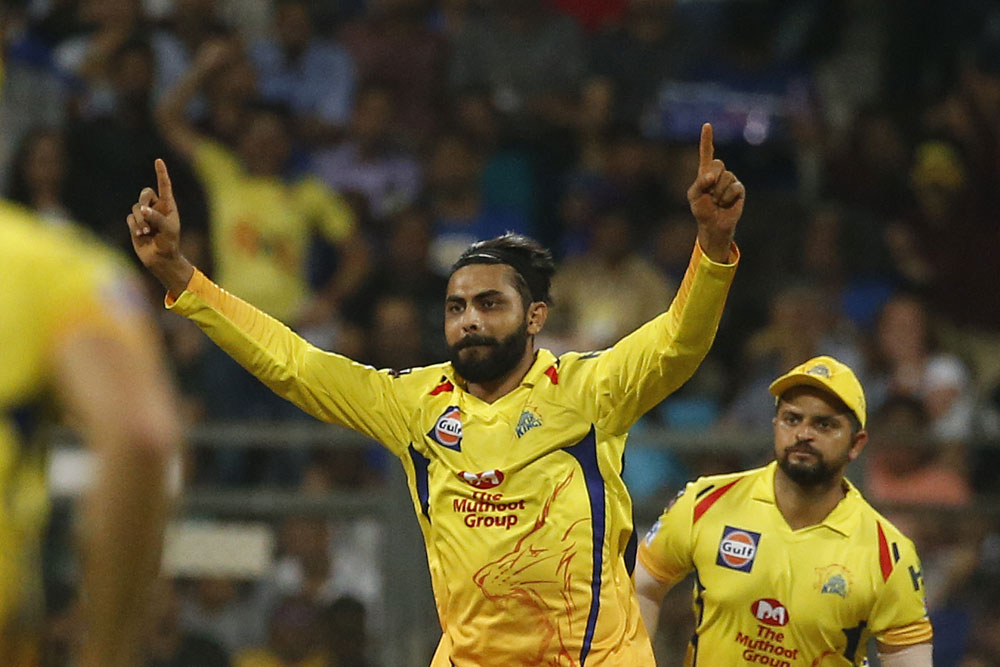 8:40 PM IST: Ravindra Jadeja on with his first over, and Rohit Sharma's wicket off the very first ball. Caught behind. Good work as usual from the legend himself. Rohit waited for some time with the third umpire checking the front foot no-ball. Views blocked from both off and leg sides, by a fielder and the bat of Suryakumar Yadav. Given out. Rohit made 13 off 18. Three runs and a wicket from the over. MI-48/2 after eight overs.

8:30 PM IST: Bowling change. Mohit Sharma concedes just one run from his first over, a single to Rohit Sharma off the third ball. MI reach 40/1 in six overs. Suryakumar Yadav is batting on 24 off 15, while Rohit Sharma is on 10 off 14.

8:27 PM IST: Deepak Chahar leaks 14 runs from his third over. Three fours, all hit by Suryakumar Yadav. MI have added 30 runs in the last two overs. And they have reached 39/1 in five overs.

8:21 PM IST: Big over for Mumbai Indians. Suryakumar Yadav, the leading scorer of MI last season, hits the firs two balls for fours. One through cover and a straight drive. Rohit Sharma joined the fun by hitting the fourth ball for another four. 16 runs from Shardul Thakur's second over.

8:14 PM IST: Shardul Thakur shares the new ball and conceded just one. Then, Deepak Chahar gets the wicket of Quinton de Kock, caught at square leg by Kedar Jadhav. FoW - 8/1 (2.3 Over). That brings Suryakumar Yadav in the centre. 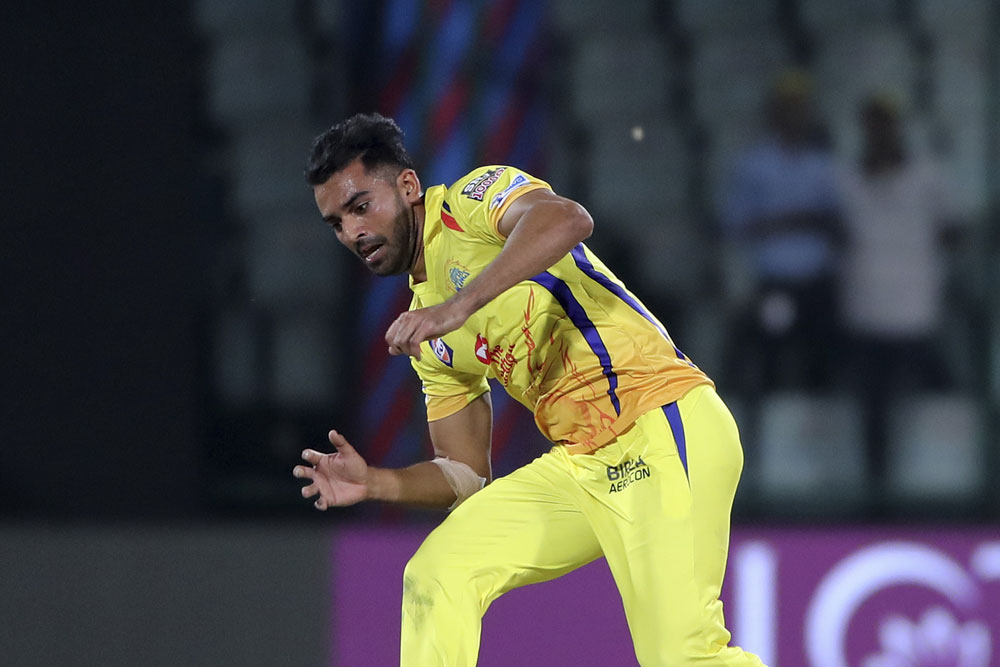 8:04 PM IST: Deepak Chahar, right-arm medium pacer, starts the proceedings. Four dot balls to left-handed Quinton de Kock, then the ball talked. The fifth ball moves just enough to come back and hit the South African on the thigh. One leg bye and another single. Just two runs from the over.

7:59 PM IST: If you were wondering about the Chahars like us, here is some help...

Double first-cousins Deepak and Rahul Chahar (their fathers are brothers and their mothers are sisters) playing in opposite sides tonight. #IPL2019 #MIvCSK

7:37 PM IST: Two changes for MI. Mitchell McClenaghan misses out and Jason Behrendorff makes his debut for Mumbai. Mayank Markande is not well and Rahul Chahar replaces him.

One change for CSK. Mohit Sharma in place of Mitchell Santner.

7:20 PM IST: The West Indies all-rounder will be one of the players to look out for, besides the two captains. Then there are the likes of Pandya brothers – Krunal and Hardik, Kieron Pollard, Quinton de Kock in the MI ranks; Suresh Raina, Deepak Chahar, Shane Watson in the CSK ranks.

7:15 PM IST: But the last time these two teams met, CSK won a thriller in the penultimate ball, by one wicket, thanks to Dwayne Bravo's 68 off 30.

7:03 PM IST: In contrast, CSK captain MS Dhoni has had tough times in Mumbai, especially against Jasprit Bumrah and Lasith Malinga, getting out three and two times respectively. He hit a six to win the 2011 World Cup at Wankhede Stadium, but the venue has not been his favourite in IPL. He averages only 26.44 only. His average against MI is low at 36.00, which is his second lowest, just ahead of 34.60 vs Delhi.

6:55 PM IST MI captain Rohit Sharma is primed for a good score. He has had starts in the previous games – 14 vs DC, 48 vs RCB and 32 v KXIP – but failed to convert. He's good record against CSK. His total of 606 runs in the fixture is second in the list of most runs scored against CSK, behind only SCB captain Virat Kohli (738).

For CSK, it's been smooth sailing, winning all three matches played so far. And are the pace-setters. They beat RCB in the season opener by seven wickets. It was followed by wins against DC, by six wickets then an eight-run win against Rajasthan Royals (RR).

6:20 PM IST: Ahead of the match, Harbhajan Singh made a stunning statement about the rivalry.

"Mumbai Indians is a very popular team. It was kind of an India vs Pakistan game whenever Chennai played against Mumbai. We always wanted to beat Chennai and they wanted to beat us. But it was other way around for me (after joining CSK) to get used to beating Mumbai Indians," Harbhajan Singh said on the Super Kings show on Star Sports.

For the record, the celebrated off-spinner played for MI for 10 seasons before he joined CSK in 2018.