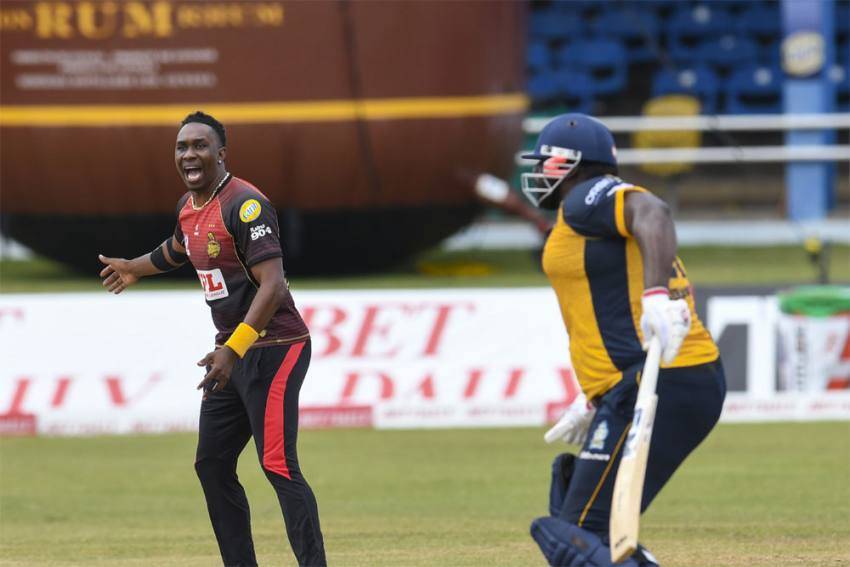 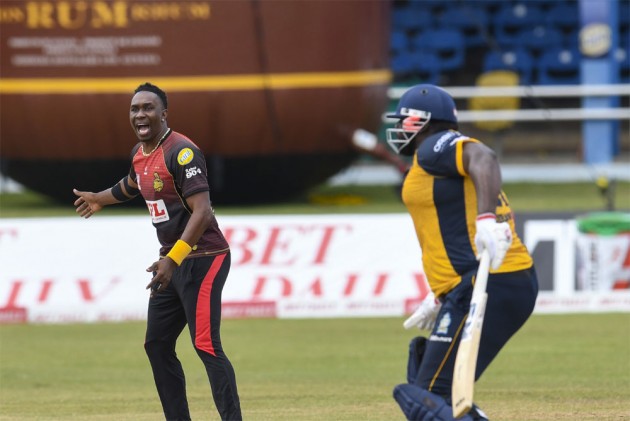 While Dwayne Bravo made history on Wednesday by becoming the first player to reach 500 T20 wickets and 100 Hero CPL wickets, his brother Darren hit a quick-fire 23 off 13 balls with two sixes to help Trinbago Knight Riders chase down the revised 72-run target in nine overs with six balls to spare.

Darren's first off the two sixes also made him the first to record 100 sixes in CPL.

There was another landmark on Wednesday as Tambe, 48, became the first Indian to play in the CPL and his only over saw him pick up the wicket of Najibullah Zardan.

The Zouks started aggressively before Andre Fletcher (10) departed to be reduced to 32 for one after three overs.

He later castled Roston Chase in the sixth over to add another wicket to his tally.

Zouks failed to stitch together partnerships, as only Najibullah Zadran (21) and Mohammad Nabi (30) got past 20.

Bravo was the pick of the bowlers for Knight Riders with two for seven in three overs as rain intervened in 17.1 overs with Zouks scoreboard reading 111 for six.

Knight Riders were handed a revised target of 72 in nine overs but Nabi sparked hope by trapping Lendl Simmons leg before for a second-ball duck.

Munro swept for four and then a six to get the Knight Riders on road to victory.

Zouks' Scott Kuggeleijn sent down five wides in an over that went for 11.

Meanwhile, in the second CPL match of the day, hard-hitting Kyle Mayers (85 off 59) struck a quickfire half-century to help Barbados Tridents beat Jamaica Tallawahs by 36 runs.

Sent into bat, Tridents suffered early blows in the form of openers Johnson Charles and Shai Hope before Mayers single-handedly powered his team to 148 for seven with his magnificent knock that was studded with three boundaries and eight hits over the fence.

Defending the target, the spin duo of Mitchell Santner (2/10) and Rashid Khan (2/33) snarred four wickets between them to put brakes on Tallawahs' scoring rate.

Besides, Jason Holder (2/18) and left-arm medium-pacer Raymon Reifer (2/13) also picked up two wickets each to restrict Jamaica Tallawahs to 112 for nine.

Player of the match: Dwayne Bravo

Player of the match: Kyle Mayers.