Some athletes are training abroad while most are in India. Athletes may need to spend long quarantine periods in countries not banned by Japan 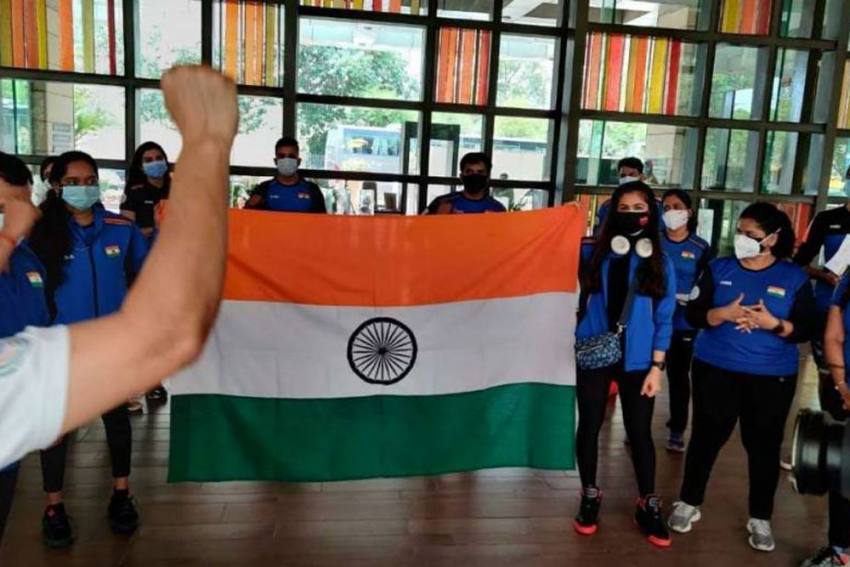 India will field a very strong shooting team at the Tokyo Olympics. Here, the team poses before leaving for Croatia, from where they will fly to Japan for the Games.
Courtesy: Twitter (@SumaShirur)
Outlook Web Bureau 2021-05-13T16:13:12+05:30 COVID-19 Impact: Japan Bans Travellers From India, Nightmare For Tokyo Olympics-Bound Athletes 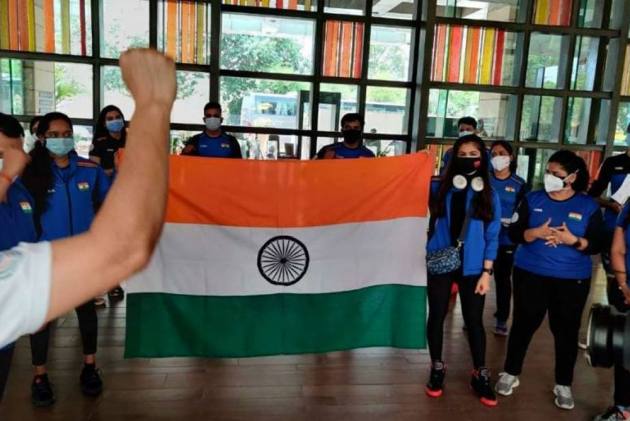 Indian Olympic Association (IOA) stares at a possible logistical nightmare as Japan government on Wednesday decided to ban entry of foreign residents who are travelling from India. The step, which also bans travellers from Nepal and Pakistan, was taken in light of the rapid spread of COVID-19 and emergence of more virulent variants, said the Ministry of Foreign Affairs of Japan. (More Sports News)

Despite reduced qualification opportunities and limited competitions to prepare for the biggest multi-sport competition, India are likely to send more than 100 athletes in at least 13 sports for the postponed Tokyo Games, which starts July 24. But the latest development, of banning travellers from India, will present a nightmarish problem for the IOA.

If this temporary ban remains, Indian athletes and officials will need to leave relatively earlier for the Games, or probably camp in a country which is not in Japan's 'red list'.

Currently, not all 'qualified' athletes are camping in one centre. Different associations have different camps, and some are abroad taking part in competitions in the hope of last minute fine-tuning.

For example, the Olympic-bound shooters have left for Croatia in a chartered flight to participate in the European Championship. They will then take part in the ISSF World Cup, before leaving directly for Tokyo.

Unlike the National Rifle Association of India, other bodies are unlikely to make such arrangements.

IOA will be required create different groups to felicitate smooth flight to Tokyo at great expense. Such scenarios will leave the powers that be at IOA and sports ministry at their wits' end. It will take toll on some itineraries, to say the least.

Then, there are many COVID-19 protocols to be followed too, including quarantine and testing. It sure will take a massive toll. Both IOA president Narinder Batra and secretary general Rajeev Mehta didn't respond to Outlook's calls.

The entry ban will take effect from Friday (May 14), and it's unclear how long the restriction will be in place for.

India sent its biggest-ever contingent to a Games in the last edition at Rio 2016 with 117 athletes representing the world's second most populous country in 15 sports. India returned with two medals -- silver and a bronze.

This time, India is expected to do far better at the Tokyo Games, with a medal prospects in shooting, wrestling, boxing, weightlifting, etc.

India on Wednesday reported a record 4,205 COVID-19 deaths in the last 24 hours. The country's official death count of 254,197, is the third most in the world, after the United States and Brazil.