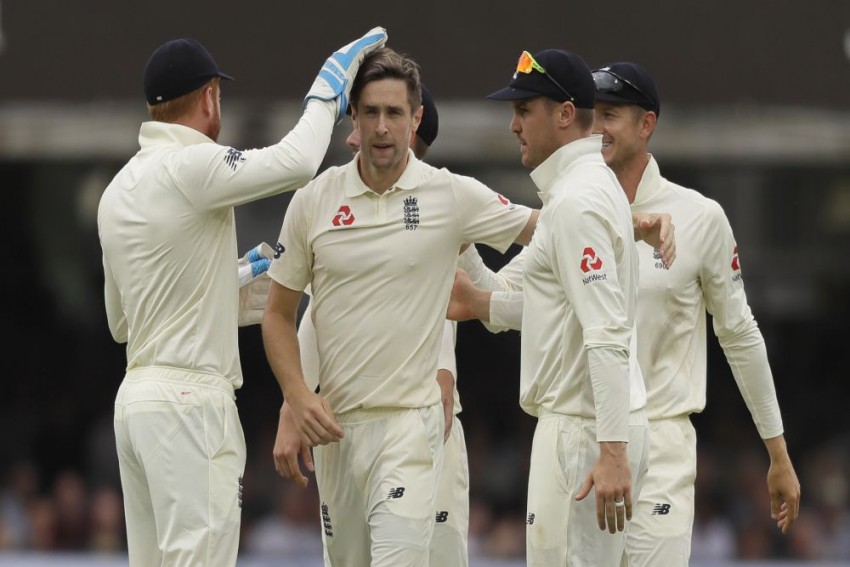 Chris Woakes, centre, celebrates with teammates the wicket of Paul Stirling during the third day of the Test match between England and Ireland at Lord's on Friday.
AP
Omnisport 2019-07-26T19:38:12+05:30 Chris Woakes And Stuart Broad Dominate As England Crush Ireland At Lord's 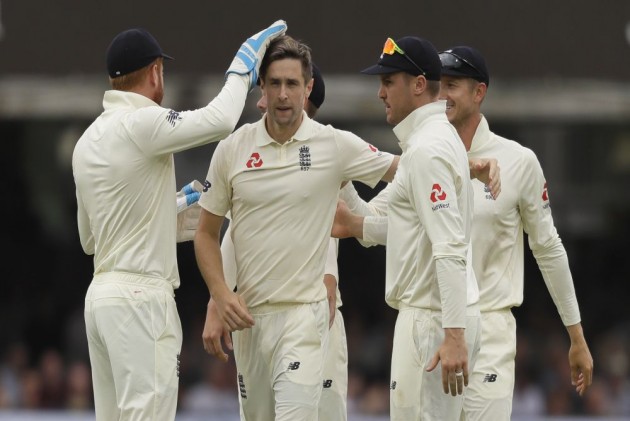 Chris Woakes and Stuart Broad ripped through Ireland at Lord's to spare England from a humiliating Test defeat on the eve of the Ashes. (HIGHLIGHTS | SCORECARD)

Woakes continued his superb record on the ground with 6-17 as the visitors were bundled out for a paltry 38 – the seventh-lowest completed innings score in Test history – and England won by 143 runs, despite collapsing to 85 all out themselves on the first morning.

The Warwickshire all-rounder now has three five-wicket hauls at Lord's, with 24 scalps overall at 9.75 at English cricket's HQ and his Friday spell served as a timely re-stating of his Ashes credentials, following a lacklustre first-innings outing.

Broad chipped in with 4-19 before Woakes uprooted Tim Murtagh's leg stump to wrap up a torturous 15.4 overs for Ireland on a day that had promised so much for the Test rookies.

Murtagh's mastery of helpful bowling conditions on day one put a first victory in the longest format at the third time of asking on the cards for Will Porterfield's side, and that remained the case when Stuart Thompson (3-44) bowled Olly Stone with the first ball of day three.

It meant England were 303 all out and the ultimately unchallenged victory target was 182.

The opening stand of 11 between Porterfield and James McCollum was Ireland's biggest, with a sharp catch behind from Jonny Bairstow off Woakes dismissing the captain to start the procession.

McCollum's wicket was the first of three to go with the score on 24, as Broad pinned Kevin O'Brien plumb in front and Woakes successfully reviewed an lbw appeal against Gary Wilson.

By that time the dangerous Paul Stirling had departed bowled without scoring – his decision to aim a booming drive at Woakes a particularly foolhardy stroke in a match packed with them.

The tail offered scant resistance, with Woakes and Broad's brilliance bailing out their under-par batting colleagues and allowing England to head into their latest duel against Australia with blushes spared.