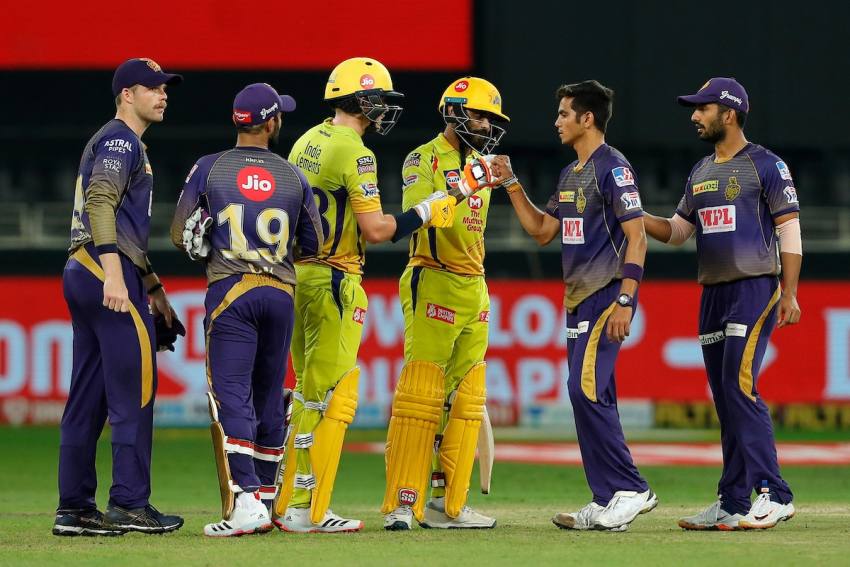 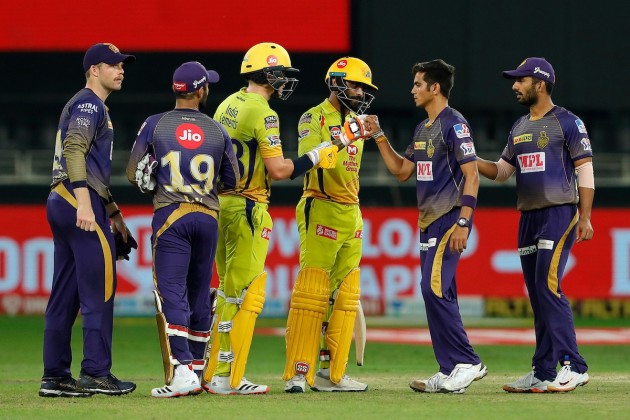 It's time for Kolkata Knight Riders' big boys to come to the party. With Andre Russell doubtful, Sunil Narine running hot and cold, a lot of emphasis will be on skipper Eoin Morgan and KKR's costliest recruit, Australian bowling allrounder, Pat Cummins. Kolkata Knight Riders are under pressure to win full points in their remaining two games to stay in the reckoning for a spot in the IPL playoffs. First up, KKR face Chennai Super Kings in Dubai today. CSK have no chance to qualify but can spoil KKR's party, like they did to Royal Challengers Bangalore. The first-leg clash between CSK and KKR ended in a win for the purple shirts. Chennai had made a mess of an easy chase and that could be reason enough for MS Dhoni's team to exact some revenge. (LIVE SCORES | POINTS TABLE | FULL SCHEDULE)

11:14 PM IST: "Our bowlers gave it everything, but the skills were a bit off. We'll have to move on quickly. I think the score was enough. I can't fault any bowlers. Nagarkoti probably didn't have enough runs to defend," Eoin Morgaan after the loss.

11:07 PM IST:  CSK Win SIX!!!! Nagarkoti hits for over 98m for maximum; Chennai were out of the tournament but this win will make KKR's road to playoffs harder. Jadeja smacks SIX

11:00 PM IST: CSK need Big shots, Ferguson bowls 19th over; Jadeja drags the 4th ball for a FOUR!!! much need at this stage; Follows it with a full Toss, FREE HIT goes for a SIX!!!!; It's now game of nerves; Last Ball disappears for FOUR

10:48 PM IST: Lockie Ferguson into the attack; Gaikwad gets the release shot a FOUR!!! of the 16.4 ball, Ferguson follows it up with a wide; Under pressure now needs to restrict the next ball to a single

10:40 PM IST: Narine builds on pressure, keeps CSK quiet, Curran takes a single of the 4th ball, CSK need big shots, Gaikwad in the middle. This chase will test him and Curran. Curran finally finds FOUR of the last ball;  7 runs of the over

10:28 PM IST: WICKET!!!! Chakravarthy clean bolds MS Dhoni CSK look in trouble; End of 15th over Chakravarthy drops Sam Curran could have been two wickets in an over

10:28 PM IST: 13.4: WICKET!!! Pat Cummins comes into the attack; KKR want wicket but Rayudu has other plans; Two consecutive FOURS!!!! KKR could see their dream of going 4th on the table slipping; BUT Cummins provides breakthrough Rayudu has played one shot too many caught by Narine

10:16 PM IST: End of 13th: Chakravarthy into the attack KKR need a wicket. CSK take 9 runs of the over; Gaikwad is looking at yet another match winning contribution, while Rayudu is fluent

10:16 PM IST: End of 12th: 2nd IPL 50 for Ruturaj Gaikwad takes a double of the second ball. CSK are sailing in the chase. Rayudu at the other end is looking in a good form. Rayudu hits Nagarkoti for a SIX!!! of the 4th ball cuts the bowler over extra cover, Chennai are out but looks like will spoil KKR's party;

10:09 PM IST: End of 10th; The ball was tossed to one of the star of the night Nitish Rana; Rayudu loves it, welcomes Rana with 3 consecutive FOURS!!! taste of his own medicine; Remember Rana hit three consecutive sixes in his whrilwind knock of 87; Dew making it difficult to grab the ball; 16 runs of the over

9:53 PM IST: End of 7th CSK have reached 49/0 Narine has been given atmost respect by both Watson and Gaikwad, 5 runs of the over

9:46 PM IST: End of 6th POWER PLAY GONE!!! Chakravarthy into the attack, 5.3 Gaikwad takes on the spinner lofts it over bowlers head for FOUR!!!

9:44 PM IST: End of 5th; Gaikwad now getting a move on scoring freely against Ferguson; 4.1 FOUR pulled over sqaure leg, 4.3 FOUR straight over bowlers head; Gaikwad is off to a promising start; 9 runs of the over; Varun Chakravarthy into the attack

9:40 PM IST: End of 4th; Narine bowls well conceding singles only; a good start 5 runs of the over; Lockie Ferguson into the attack

9:34 PM IST: End of 3rd Gaikwad has grown in confidence crunches length ball for a FOUR!!! of Cummins, Not happy Cummins tries a bouncer goes for a FOUR!!Watson finishes the over with yet another FOUR!!! CSK 14 runs of the over; Sunil Narine into the attack;

9:25 PM IST: End of 1st over by Pat Cummins CSK start watchfully, Cummins manages to keep things tight. Watson coming after missing out a few matches along with Ruturaj Gaikwad takes a few singles; 2 runs of the 1st over

9:20 PM IST: CSK to start the chase with Shane Watson and Ruturaj Gaikwad; Pat Cummins to start the attack for KKR

9:07PM IST KKR set a target of 173 Rana 87 was the best player for them by miles. Now over to KKR bowlers to defend and remain in hunt for playoff berth

8:53 PM IST: End of 19th Sam Curran into his 3rd over; Morgan heaves one for a FOUR of the 1st ball, crushed through extra cover; Karthik gets into act hits FOUR through square leg; 12 runs of the over

8:53 PM IST: End of 18th New man in Dinesh Karthik and skipper Eoin Morgan now need to show their all-round game. KKR need runs on the board; Karthik slaps 4th ball for a FOUR!!!!; Last ball of the over the fielder dives to take the catch but misses, The ball rolls over to FOUR

8: 49 PM IST: WICKET!!! and it's a big one for CSK; Nitish Rana gone; Nigidi bowls a slower one, Rana looking to clear the park again only find Sam Curran at long-on; Curran catches a skyer; Rana c Curran b Ngidi 87 (61b)

8:45 PM IST: End of 17th Chahar into the attack Rana weclomes him with a FOUR !!! as Kolkata now turning on the pressure; A ball later another one dispatched for FOUR!! inside out; Rana steals a single; 100 on the cards for Rana plenty of overs to go;

8:43 PM IST: End of 16th 3 SIXES!!!! 1st slog swept for maximum over midwicket; 2nd out of park over sqaure leg; 3rd straight; Rana has put Karan Sharma under pressure; 19 runs of the over a BIG ONE FOR KKR

8:38 PM IST: End of 15th; CSK give away 9 runs, Jadeja gets hit for a FOUR by Rana who is now the senior partner with skipper Morgan at the other end; KKR need some quick runs

8:33 PM IST: FIFTY !!! for Nitish Rana; flicks one to deep micwicket for a single

8:30 PM IST: 12.5 KKR Lose another one WICKET!!! Rinku Singh goes. He had hit the previous ball for a FOUR but Jadeja gets his man of the next ball. Rinku gets caught at deep square; Rinku Singh c Rayudu b Jadeja 11; KKR Skipper Eoin Morgan is the next man in

8:26 PM IST: End of 12th;  Rana is now rotating the strike and also scoring at will but a good over for CSK, Karan Sharma manages to restrict KKR to singles. JUst 4 runs of the over

8:22 PM IST: End of 11th KKR get into the act of scoring quickly. Rana leads the charge; Santner was in middle of a good over before Rana smashed two FOURS!!! of the last two balls;

8:20 PM IST: End of 10th KKR are trying to settle again; Rana is now taking on the scoring mantle hits a slower bowl of Nigidi for a FOUR!! past point; KKR take 7 runs of the over

8:12 PM IST: WICKET!!!!! End of Sunil Narine knock; tossed up by Santner; Narine goes for a big shot find Jadeja at the bouandary ; Rinku Singh comes in next; Santner has finshed the over with a wicket much to the delight of CSK; Narine c Jadeja b Santner 7;

8:02 PM IST: End of 7th, CSK Take Time out; Rana and Gill have give KKR obe of their best starts in Powerplay this season; Ravindra Jadeja bowling seveth manages a quiet over giving away 4 runs

7:58 PM IST: End of 6th ; Mitchell Santner into the attack, Rana has suddenly found hos groove; Two FOURS!!! and a SIX!!!! End of Powerplay KKR take 15 runs of the over

7:53 PM IST: End of 5th Lungi Nigidi into the attack bowls an economical over Just one FOUR of the last ball, Rana gets the first proper connection with the ball

7:48 PM IST: End of 4th; Sam Curran comes around the wicket to cramp Gill for room; Gill makes room moves down the leg side to crash it for FOUR!!!, Rana seems to be struggling at other end; beaten twice before he defends the last ball; 5 runs of the over

7:44 PM IST: End of 3rd over; Chahar to bowl his 2nd over. Gill is looking in good touch; short arm pulls the first ball for a FOUR!!!, KKR need more of this; Gill picks up a single of next ; Rana has been watchful and is taking his time to settle playing a sheet anchor role; 7 runs of the over; KKR 23/0 Gill 17, Rana 6

7:39 PM IST: End of 2nd over Sam Curran manages to keep things quiet, Rana who was first ball duck in the last match takes his time to settle; A single of the first and fifth ball as just  3 runs of the over

7:36 PM IST: End of 1st over: A positive start for KKR and an ideal one for KKR, FOUR !!! of the first ball, outside off Gill hammers it past extra cover; Chahar had his man the next ball, but inside edge misses stumps but gives Gill a FOUR!!. Rana has a shaky start, thick edge past a diving short third man; 13 runs from the over; Sam Curran to bowl the next

7:30 PM IST:  Shubman Gill and Nitish Rana to start the proceedings for KKR; CSK in huddle, Dhoni leads the team on to the field; Deepak Chahar to bowl the first over

7:15 PM IST: CSK have won the toss and elected to bowl first

KKR have been only a shade better than CSK in terms of performance in this edition of the IPL. With six wins and six defeats, KKR are fifth on the IPL table but they should consider themselves plain lucky to have won some games because their opponents made terrible mistakes. CSK threw away the first-leg match against Kolkata Knight Riders. Needing 69 runs from 48 balls with nine wickets in hand, CSK suffered a batting collapse to lose by 10 runs (target 168).

Sunil Narine and Andre Russell turned match-winners for KKR with spells that choked the CSK batsmen. KKR are sweating on Russell's availability. The burly West Indian all-rounder has been a major flop this season and is now nursing an injury. His withdrawal from the Lankan Premier League earlier this week is a clear signal that all is not well with Russell. If he plays, it will be Sunil Narine's 350th T20 game.

With nothing to lose, CSK can play spoilsport. And they have already hurt the formidable Royal Challengers Bangalore in their previous game. CSK beat RCB by eight wickets in Dubai on Sunday. After Sam Curran's 3 for 19 and Deepak Chahar's 2 for 31  wrecked RCB's strong batting line-up, young Ruturaj Gaikwad, who made his IPL debut this season, scored an unbeaten 65 to lead CSK's reply to RCB's 145 for six wickets. Ambati Rayudu (39 off 27 balls) and MS Dhoni (19 not out off 21 balls) then steered CSK to an easy win with eight balls to spare.

Chennai Super Kings and Kolkata Knight Riders have clashed 22 times in IPL. CSK have won 13 times and KKR eight. One match did not produce a result.

Stephen Fleming along with KKR skipper Eoin Morgan and coach Brendon McCullum before the match in Dubai on Thursday.