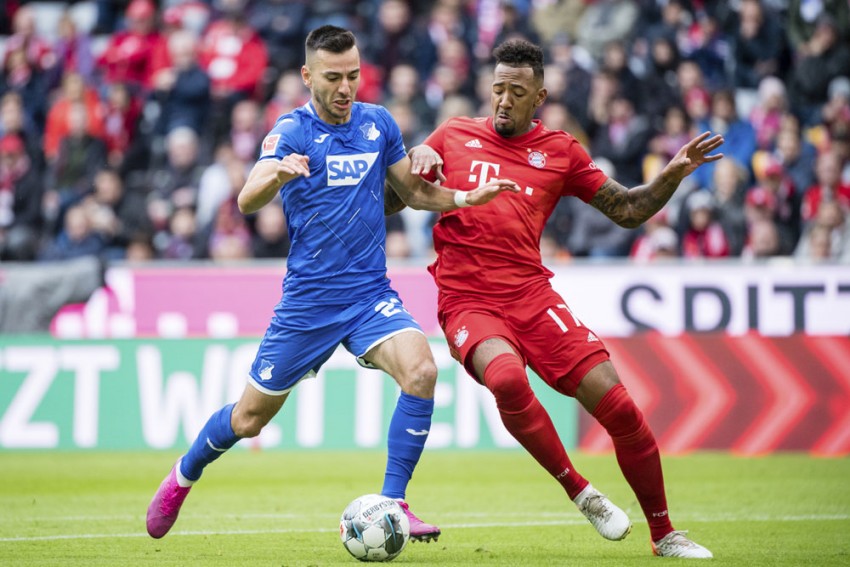 Bayern Munich suffered their first defeat in 21 Bundesliga matches as Hoffenheim ran out 2-1 winners at the Allianz Arena courtesy of Sargis Adamyan's brace.

The Armenian striker scored either side of Robert Lewandowski's 11th league goal of the season to earn Alfred Schreuder's struggling side a shock victory over the champions, whose flat performance merited nothing more than a defeat.

Hoffenheim came into the game winless in four but found themselves up against a lacklustre Bayern side who offered precious little creativity before Lewandowski cancelled out Adamyan's opener.

The Bayern striker wore the look of a man dragging his team out of the mire as he headed home the equaliser but he could not spare Niko Kovac's blushes after Adamyan struck again 11 minutes from time and earned his side a memorable triumph.

An early lapse in Bayern's defence allowed Adamyan a clear run at goal inside the opening five minutes but he hesitated, allowing Jerome Boateng to get a leg in the way of his shot, which ballooned over the crossbar.

Serge Gnabry had the ball in the net after 22 minutes after some fine build-up play by Robert Lewandowski, but the goal was ruled out for offside.

Bayern were caught napping again nine minutes after half-time when Dennis Geiger robbed Kingsley Coman of the ball before playing in Adamyan, who cut inside two defenders and scored with a neat left-footed finish inside Neuer's near-post.

Stefan Posch gave the hosts another scare when his angled drive flashed across the face of goal in the 64th minute as tension grew around the stadium.

Boateng floated a cross onto Gnabry's head with 22 minutes remaining and the winger's flick sent the ball curling just wide before Lewandowski rose unmarked to meet substitute Thomas Muller's chipped pass and powered a header into the far corner of the net.

But the home crowd's relief was short-lived. Hoffenheim continued to attack on the break and Robert Skov's low cross found Adamyan on the edge of the box, from where he sent the winning goal skidding into the bottom corner of Neuer's net.

The Bayern goalkeeper went up for a corner as the champions desperately sought another leveller that never arrived.

What does it mean? Bayern's soft centre exposed

While their forwards often perform at a level that glosses over defensive mistakes, Bayern have now conceded four goals in two Bundesliga matches and it could have been worse for them if Hoffenheim's finishing was sharper.

After his early miss, Adamyan more than made amends with two fine finishes, ensuring Bayern's leisurely defending did not go unpunished.

Boateng off the pace

Boateng was a doubt before the game after picking up a knock in midweek and the space he afforded Adamyan throughout suggested he was short of his best.

Bayern head to Augsburg after the international break for a game they will expect to win, while Hoffenheim face a tough home game against Schalke, who will lead the Bundesliga if they beat Cologne.