Bryson DeChambeau Bludgeons His Way To US Open, Leaves All Awestruck

On a course, where under par rounds were a rarity Bryson DeChambeau shot 3-under 67, totalled six-under 274 and won by six shots as overnight leader Matthew Wolff’s date with history was called off 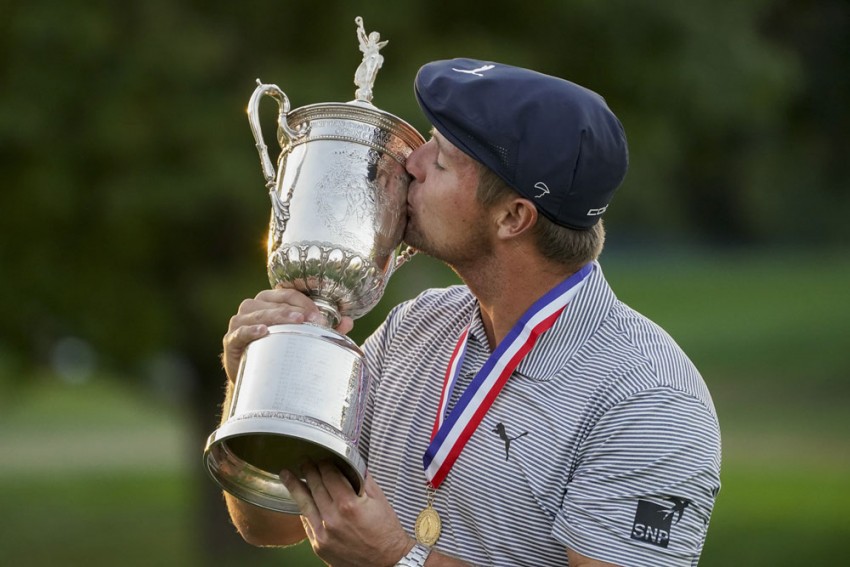 Bryson DeChambeau did it the way he said he would. Smash the ball as far as he could and then hit his way out of whatever trouble he got into to find his way around. He did and after four days of hard work an unforgiving Winged Foot and held aloft the US Open Trophy and opened his Major account. (More Sports News)

On a course, where under par rounds were a rarity he shot 3-under 67, totalled six-under 274 and won by six shots as overnight leader Matthew Wolff’s date with history was called off.

DeChambeau was the only player in red figures and no bogey-free round was recorded in the four days.

The 21-year-old Wolff shot 75 and totalled even par and ended second, a great result in his second Major, after being Tied-4th at his Major debut last month.

Wolff hoping to become the first U.S. Open rookie to win the title since 20-year-old amateur Francis Ouimet in 1913, missed out, out-bludgeoned by DeChambeau.

Louis Oosthuizen (73) ended third at 2-over and Harris English suffered a lost ball on his opening hole, but recovered to finish fourth and Xander Schauffele, added to his collection of fine finishes at big events by finishing fifth. Dustin Johnson, who seemed unbeatable after his FedExCup triumph, was Tied-6th with Will Zalatoris. Rory McIlroy, Justin Thomas, Webb Simpson, Tony Finau and Zach Johnson were Tied-8th at 6-over 286.

DeChambeau, two shots behind Wolff, going into the final round, passed him after just five holes and then kept going further. In between both eagled the Par-5 ninth, but DeChambeau was pulling away further and further away.

The end came when his 7-foot par putt fell on the 18th and DeChambeau acknowledged the crowds, which weren’t there.

This was also an endorsement of his method of adding 40 pounds of muscle with 6000-calories a day diet of protein shakes and steaks. He added speed and power and hit like no one before. His irons are of the same length and he does not bend his left arm. In short, he does everything a golfer never could or needed to be done.

DeChambeau himself said, “I think I'm definitely changing the way people think about the game. Now, whether you can do it, that's a whole different situation. There's a lot of people that are going to be hitting it far. ”

“Matthew (Wolff) was hitting it plenty far today. A couple of putts just didn't go in for him and kept the momentum on my side. So he's definitely got the firepower and the strength to do it. You've got to be looking out for him in the future. There's a lot of young guns that are unbelievable players, and I think the next generation that's coming up into golf hopefully will see this and go, hey, I can do that too.”

And he left everyone in awe. Even Rory McIlroy said, “I don't really know what to say because that's just the complete opposite of what you think a U.S. Open champion does. Look, he's found a way to do it. Whether that's good or bad for the game, I don't know, but it's just not the way I saw this golf course being played or this tournament being played."

When DeChambeau and Wolff made the turn after nine, there was still competition, as only a strong separated them. Then DeChambeau took off and Wolff crumbled. DeChambeau had one more birdie, but more importantly no bogeys and he saved pars all the way. Meanwhile, Wolff had two bogeys and a double bogey on Par-4 16th. That swelled the lead of one at turn to six at finish.

DeChambeau joined Jack Nicklaus and Tiger Woods as one of the only three golfers who have captured an NCAA individual title, a U.S. Amateur and a U.S. Open.

“It's just an honour,” said DeChambeau, who also is the 12th player to have won a U.S. Amateur and a U.S. Open. “I don't know what else to say. It's been a lot of hard work. Mr. Nicklaus has always been awesome to me. Tiger has always been great to me. I can't say thank you enough to them for helping push me along to be a better person and a better golfer, as well. To be in the likes of that company is special. I'll forever appreciate that.”

Almost two decades ago, Woods changed the way we looked at the game. Now DeChambeau has done it.

This week, Tiger Woods, missed the cut at Winged Foot, just as he had in 2006, when Phil Mickelson double bogeyed the 72nd and lost the US Open – the only Major he has never won. Mickelson, too, missed the cut this week.

Woods goes back home and will return to defend the two titles he won in 2019 – the Zozo Championships, this in Sherwood, instead of Japan, and the Masters at Augusta in November instead of April, besides teeing up at his own Hero World Challenge to finish the year. Mickelson will divide his time between the Champions Tour (For over 50s), a few PGA Tour events, besides the Masters, which he has won three times.

For now, DeChambeau is the man of the moment.