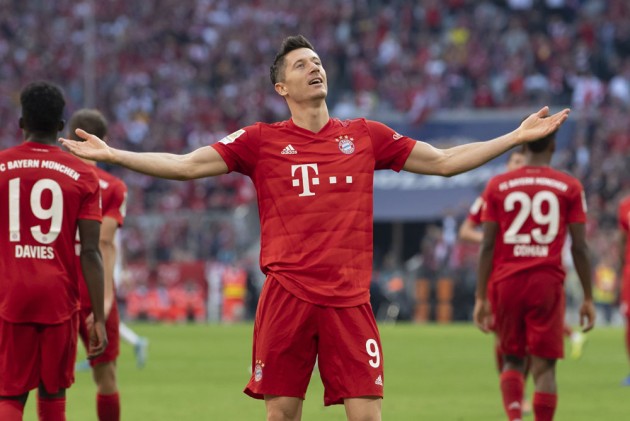 The prolific Robert Lewandowski moved into the Bundesliga record books as he helped Bayern Munich to a 2-1 victory over Union Berlin.

Having matched Pierre-Emerick Aubameyang's record of scoring in the opening eight Bundesliga matches of a season when he found the target against Augsburg, Lewandowski became the first player to net in the first nine games of a campaign when he grabbed Bayern's second seven minutes into the second half.

It was a typically composed finish from Lewandowski, who up until that point had been well shackled by Union either side of Benjamin Pavard's superb strike giving Bayern the lead.

Sebastian Andersson missed a penalty for Union on 58 minutes and, although Sebastian Polter converted a second spot-kick for the visitors late on, Bayern held firm to secure a first win in three league matches and move top of the table.

Pavard lit up what had been an uneventful opening in the 13th minute, slamming home on the half-volley from Rafal Gikiewicz's poor punch.

Coman was the provider for Bayern's next opportunity, playing a neat one-two with Thomas Muller, who drilled his effort straight at Gikiewicz. Union's goalkeeper then kept out Philippe Coutinho's deflected shot before half-time.

Bayern soon had their second, though. After a fine run from full debutant Alphonso Davies, Lewandowski pounced on a loose ball, setting himself before slotting home into the bottom-right corner.

After Lewandowski saw a second goal ruled out for offside, Pavard gifted Union a reprieve with a reckless foul on Polter, who made no mistake with a spot-kick that ultimately came too late.

What does it mean? Bayern top of the pile... for now

It is hugely congested at the top of the Bundesliga but, with this win, Niko Kovac's side nosed themselves ahead of the pack.

However, Borussia Monchengladbach and Wolfsburg could both leapfrog the champions should they win their respective matches on Sunday.

Remarkable Robert at it again

It has been an incredible start to the season for Lewandowski and the Poland international has now capped that off by planting himself into the league's record books.

The 31-year-old has 18 goals from 13 appearances in all club competitions so far this season and, with the Bundesliga so tight at the top as it stands, his form could well be what separates Bayern from the rest.

Union's Swedish forward does have three Bundesliga goals to his name this term, though the last one came on September 14 and he displayed a severe lack of confidence when he stepped up to take a spot-kick, ultimately squandering Union's chance to tee up a grandstand finish.

- Lewandowski is the first player to score on each of the first 9 matchdays of a Bundesliga season (13 goals in total).

- Pavard has scored two goals in nine Bundesliga games for Bayern, having only managed one in 63 league appearances for Stuttgart.

- This was the first time Bayern have ever conceded two penalties in a single Bundesliga home game.

Bayern visit Bochum in the DFB-Pokal in midweek, while Union travel to high-fliers Freiburg in the same competition. Eintracht Frankfurt are next up for Bayern in the Bundesliga.