AUS Vs IND: Hamstring Issue For Mitchell Starc But Steve Smith Feels Pacer Should Be Fine

With India set a record target of 328 by Australia at the Gabba, left-arm pacer Starc clutching his right hamstring before the final day's play was a cause for concern for the home team. 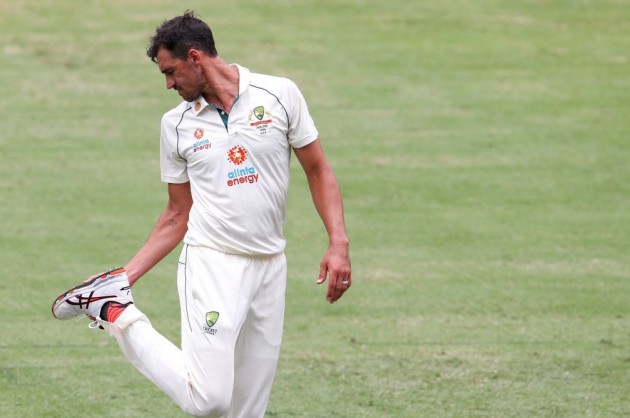 Leading pacer Mitchell Starc on Monday gave Australia an injury scare after he grabbed his hamstring but batting mainstay Steve Smith remained hopeful that he would pull through a decisive final day in the fourth Test against India here.

With India set a record target of 328 by Australia at the Gabba, left-arm pacer Starc clutching his right hamstring before the final day's play was a cause for concern for the home team.

Starc looked uncomfortable during his only over of India's second innings at the Gabba before rain led to an early finish to the penultimate day's play in the Border-Gavaskar Trophy, but Smith eWith India set a record target of 328 by Australia at the Gabba, left-arm pacer Starc clutching his right hamstring before the final day's play was a cause for concern for the home team. xpressed optimism that the 30-year-old would be good to go on Tuesday.

"I am not sure (about it), to be honest with you. Like, I saw the same thing, walking back, (Mitchell) grabbing at his right hamstring.

"I'm sure he'll get assessed by the medical staff and one thing I know about Mitchell is he's tough and he's played through some injuries before and got the job done, so he will be hopefully good to go tomorrow," said Smith.

The highest successful chase in a Test at Gabba came in 1951 when Australia ended on 236 for seven and even though teams batting last here did post big scores in recent years, they did not result in victories.

Starc hasn't been in the best of form since the four-match series began a month ago with the fast bowler looking menacing only in patches. But Australians would still want the seasoned campaigner to be at the top of his game during the crucial final passages of play.