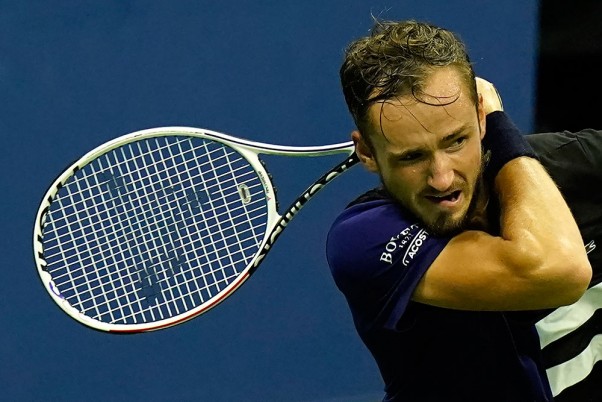 The Russian came out on top in an eventful first set that spanned 51 minutes on his way to recording a 6-3 6-4 triumph against a now-familiar opponent.

Medvedev lost when the pair met in the round-robin stage of the same tournament a year ago, though had come out on top in their most recent encounter, rallying from a set down in the final of the Paris Masters earlier in November.

There was no need for him to go the distance in London, however, as an erratic Zverev who struggled badly on his own serve – including sending down seven double faults – was beaten in straight sets.

A milestone moment for  @DaniilMedwed

He picks up his first career win at the #NittoATPFinals!#ATPTour pic.twitter.com/YYZxRORO5i

Both players lost their opening service games as they struggled to take a grip on proceedings, Medvedev eventually the one to seize control as he finished strongly to seal the opener.

The second set was not so action-packed, though it did include an underarm serve from Medvedev at 30-all in the eighth game, a tactic that paid off as he won the point before offering up an apology.

By that stage the fourth seed had already recorded a break to edge himself ahead, a lead he retained comfortably enough to allow him to serve out the victory.

An angled backhand winner on the run saw Medvedev finish with a flourish, setting him up nicely for a clash with Novak Djokovic – who had earlier defeated Diego Schwartzman – on Wednesday.

"Confidence is a key, for sure. Winning a Masters always helps for confidence," Medvedev told Amazon Prime Sport in his on-court interview.

"It was a little bit shaky from both of us [in the first set]. Second set, it was easier for both of us to hit some winners because we were so tired, we couldn't run any more!"