As India and Australia battled in the fifth and final of the ODI series at the Ferozeshah Kotla Stadium, contrasting faces of the DDCA come tellingly to the fore 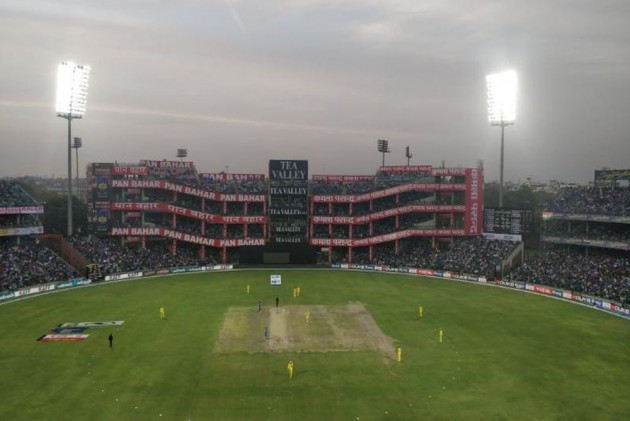 A well-known TV commentator, who was on duty during the fifth India-Australia ODI in Delhi on Wednesday, came asked with an innocent face: “Has the DDCA (Delhi and District Cricket Association) changed the name of the pavilion end of the Ferozeshah Kotla Stadium? I have heard they have named it the ‘Ghost End.” He was, of course, taking a tongue-in-cheek dig at the vacant and ‘disputed’ RP Mehra Block, or the Old Club House, of the historical venue even as the fifth India-Australia ODI was in progress at the venue on Wednesday.

The RP Mehra Block was empty as the DDCA couldn’t provide the Delhi High Court with a guarantee for spectators’ safety at this enclosure during matches. The court had told the DDCA that it would be entirely responsible for structural safety of the building, which was allegedly illegally constructed, without a plan and proper approvals from relevant authorities. Except for the TV and radio commentary teams and the print media box – and, of course, some policemen on duty -- there was no spectator in this block on Wednesday. There are around 2,000 seats in this enclosure, and the DDCA thus lost handsome revenue, though the association itself is responsible if the case has not closed so far.

However, the DDCA said that it “recovered” many of the 2000 “lost” seats, thanks to IPL franchise Delhi Capitals constructing a ‘marquee’, comprising 1,200 seats, which they will use in the upcoming IPL matches at the Kotla. Each ticket in the marquee was priced at Rs 15,000.

On a petition by former DDCA Director Dinesh Saini, who had claimed that the structure was a threat to the lives of spectators who occupy this premium RP Mehra Block to watch matches. It should, therefore, be demolished, he had argued. He had also claimed that the building was a fire hazard. The Delhi High Court had asked the DDCA to get structural safety certificates from experts and the Delhi Development Authority. The DDCA still hasn’t got the required certificates. The court has ordered the DDCA to file an affidavit. The next hearing is on April 25.

Local fans were disappointed as their three Delhi heroes in the India XI – captain Virat Kohli, Shikhar Dhawan and Rishabh Pant -- flopped with the bat against Australia in the fifth and final ODI against Australia at the Ferozeshah Kotla on Wednesday. The three cumulatively managed 48 runs as India chased Australia’s 272/9, which came about largely because of Usman Khawaja’s 106-ball 100. The stadium was packed to the brim in anticipation of some fireworks from the prolific blade of Kohli, who is going through a purple patch. But Kohli (20 runs off 20 balls) was beaten by a Marcus Stoinis ball that bounced unusually high and he failed to connect in properly as he attempted a fierce cut shot, but only managed to snick it to wicket-keeper Alex Carey. Earlier, Dhawan (12) was consumed by speedster Patrick James Cummins, with Carey taking the catch again. And Pant (16), whose World Cup berth is apparently still hanging fire, also perished without much of a fight.

Even as the Indian and Australia captains were preparing to go out for the toss at around 1 pm on Wednesday, DDCA secretary Vinod Tihara was writing a letter to Delhi Police over his suspicion that his “all area” ODI accreditation card could be misused. In his letter addressed to the Indraprastha Estate Police Station, Delhi, the ‘suspended’ secretary accused DDCA president Rajat Sharma, CEO Ravi Kant Chopra and COO G.R. Saxena of “pocketing” his accreditation card and preventing him from performing his “official duty” as association secretary. The DDCA executive committee had earlier suspended Tihara, allegedly for some misdemeanours. Tihara has questioned the decision to suspend him, pointing to a technicality. Ironically, Rajat Sharma and Tihara had jointly fought the DDCA elections in June last year and won a landslide victory as all their 12 panel members surprisingly beat their opponents by handsome margins. But they fell apart soon – some people say the rift started even as their supporters were celebrating the triumph on July 2 – and schism between them has only seemingly widened since.