The AIBA head called for honesty and transparency and promised to support referees and judges against any unfounded allegations. 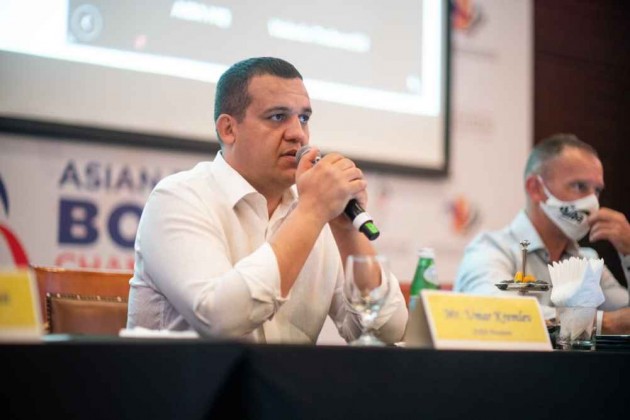 International Boxing Association President Umar Kremlev said that referees and judges, who "violate" AIBA rules, will be excluded for life as the world body pledged "zero tolerance" towards those not judging "fairly" ahead of the Asian Championships in Dubai. (More Sports News)

Kremlev met referees and judges, who will be officiating in the event that starts on Monday, last evening. He also met R&J Committee led by Chris Roberts.

The AIBA head called for honesty and transparency and promised to support referees and judges against any unfounded allegations.

"...you should be dedicated to strict AIBA rules and never violate it. The strongest should win. If you became AIBA R&J, you defend all athletes and represent the honesty, not one single country," he said.

"Should I hear about some violation, we will exclude R&J for a life-time. Today we have to fight for total honesty, we will farewell to all who are not in our team. We will also not allow anyone accuse our R&Js in misjudging," he added.

AIBA R&Js have been under the scanner ever since the 2016 Rio Olympics where some decisions caused a furore, forcing the world body to launch an inquiry.

AIBA Secretary General Istvan Kovacs said that the organisation is committed to ensuring that judging is fair at all times.

"We have already implemented open scoring, bout review, scoring system will be updated soon. Millions of kids are dreaming to become a champion. You are judging these kids, it is a huge responsibility.

"We will show zero tolerance, if someone judging not fairly. One mistake can ruin a whole career. We trust you and you can trust us. We have started to write a new chapter of our history," he said.