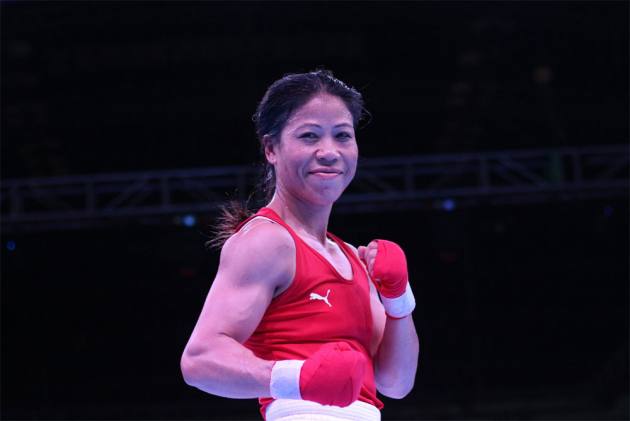 Six-time world champion MC Mary Kom (51kg) will seek her sixth gold when she squares off against Kazakhstan's Nazym Kyzaibay in the women's 51kg final of the Asian Boxing Championships here on Sunday. (More Sports News)

The 38-year-old Olympic-bound Mary Kom had prevailed 4-1 over Mongolia's Lutsaikhan Altantsetseg in the semifinals on Thursday. She will face a stiff challenge from the two-time world champion Kyzaibay in the summit clash.

Another Olympic-bound boxer Pooja Rani, who received a walk-over in the semi-finals, will fight against an in-form Mavluda Movlonova of Uzbekistan, who ended the challenge of London Olympics medallist Marina Volnova in the last-4 stage.

On Monday, defending champion Amit Panghal (52kg), Shiva Thapa (64kg) and Sanjeet (91kg) will be seen in action in the men's gold-medal bouts on Monday.

Panghal will be up against 2016 Rio Olympics and world champion Zoirov Shakhobidin of Uzbekistan while Thapa will face Asian Games silver medallist Baatarsukh Chinzorig of Mongolia.

Second seeded Sanjeet will fight against 2016 Rio Olympics silver medallist Vassiliy Levit, who is chasing his fourth gold medal of the Asian Championships.

The Indian boxers have already ensured their best-ever show by securing an unprecedented 15 medals, bettering their previous highest of 13 (2 gold, 4 silver and 7 bronze) achieved during the 2019 edition.

The International Boxing Association (AIBA) has allocated USD 4,00,000 prize money for this championships. The gold medallists of men's and women's categories will be receive USD 10,000 each while the silver and bronze winners will take home USD 5,000 and USD 2,500 respectively.