England's Pacer Jofra Archer was on fire as he blazed past Australia in Day 1 of the third Ashes Test at Headingley. In only his second Test, took 6-45 in 17.1 overs -- the first time he had taken five or more wickets in an innings at this level. 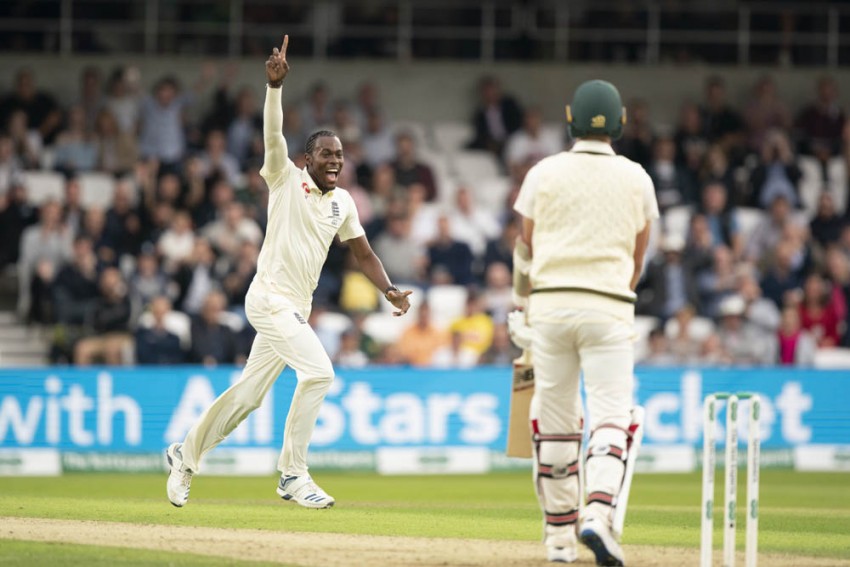 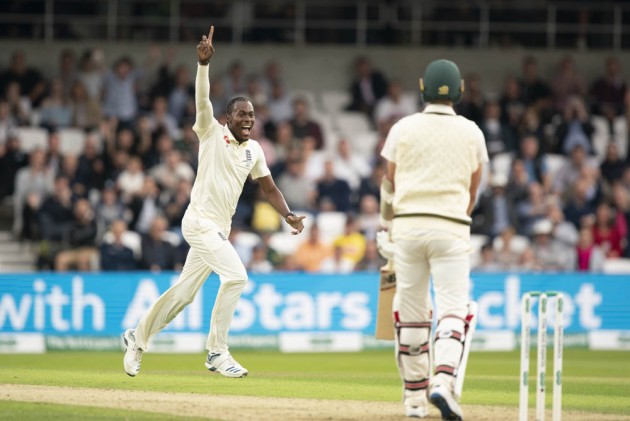 Jofra Archer took six wickets as England dismissed an Australia side without star batsman Steve Smith for just 179 on the first day of the third Ashes Test at Headingley on Thursday.

Fast bowler Archer, in only his second Test, took 6-45 in 17.1 overs -- the first time he had taken five or more wickets in an innings at this level.

England, looking to level this series at 1-1, reduced Australia to 25-2 after home captain Joe Root won the toss.

But David Warner (61) and Marnus Labuschagne (74) frustrated England in a third-wicket stand of 111.

Archer, however, turned the tide by having Warner caught behind off a 90 mph delivery. It was the start of a collapse that saw Australia lose three wickets for three runs to be 139-5.

Travis Head was bowled for a duck by Stuart Broad and Matthew Wade, a century-maker in the first Test, also fell for nought when a rising Archer delivery deflected off the thigh pad via his glove and into the base of the stump, dislodging a bail.

Warner's innings was his first double figure score of a series where he had previously managed just 18 runs in total, while Labuschagne scored his second successive fifty after he made 59 as a concussion substitute for Smith in the drawn second Test at Lord's.

Root was hoping to make the most of overcast conditions at his Yorkshire home ground and capitalise on an Australia top order missing Smith, ruled out with a concussion suffered after being hit by a 92 mph bouncer from Archer at Lord's.

Smith's scores of 144, 142 and 92 had been central to putting Ashes-holders Australia ahead as they look to win a Test series away to England for the first time in 18 years.

Warner had previously managed scores of just two, eight, three and five this Ashes -- his first Test campaign since both he and Smith completed 12-month ball-tampering bans.

Harris had been drafted in to open alongside Warner after Cameron Bancroft was dropped following 44 runs in four innings.

But Archer, bowling from around the wicket, squared Harris up with an 87.3 mph ball and had him caught behind by wicketkeeper Jonny Bairstow. Moments later, with Australia 12-1 off four overs, rain stopped play.

When play resumed, Khawaja's glance off Broad was caught by Bairstow. England, however, had to first review New Zealand umpire Chris Gaffaney's original not out decision.

More rain and bad light -- even though the floodlights were on -- halted play in the second session.

A mistimed four off Stokes through point saw Warner complete a 79-ball fifty -- a landmark greeted with now-familiar boos from some fans.

But there were cheers too, with Warner's wife Candice among those at the ground applauding her husband's innings. Warner was given out caught behind on 61 off Broad but successfully reviewed Gaffaney's decision. Labuschagne completed a 73-ball fifty as wickets continued to fall.

Archer had James Pattinson well caught by first slip Root and then had Pat Cummins, the third duck of the innings, caught behind, the disbelieving batsman failing with a review.

Labuschagne's gutsy innings ended when he was lbw to Stokes after missing a full toss, with Archer ending the day's play when he had tailender Nathan Lyon lbw.