It was a historic evening for Pierre-Emerick Aubameyang as Arsenal closed on Manchester United and Wolves by beating Norwich City 4-0. 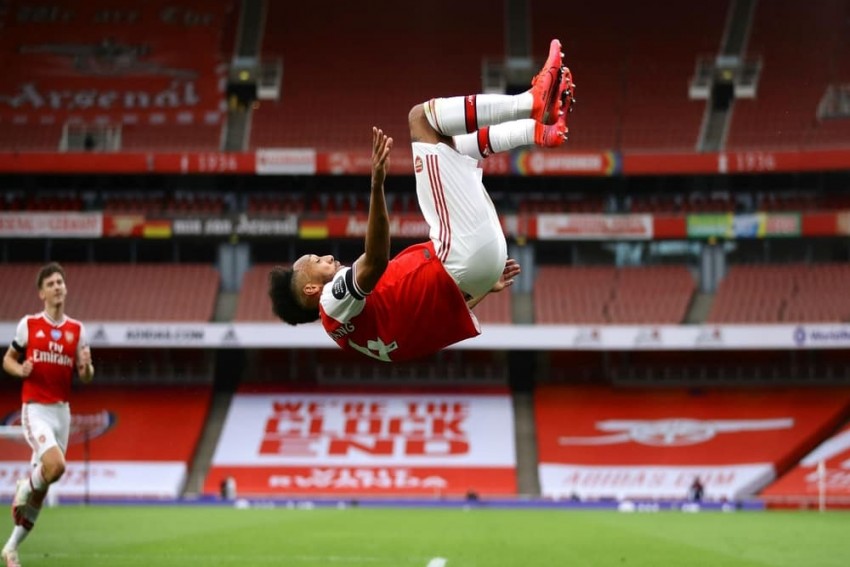 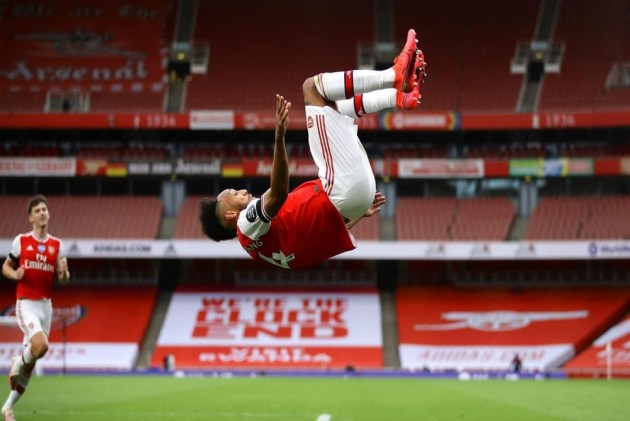 Aubameyang moved on to a half-century in 79 appearances in the competition as he dispossessed a dithering Tim Krul to open the scoring.

He then set up Granit Xhaka to make it 2-0 and doubled his tally on the day in the second half after Norwich forward Josip Drmic played the ball straight to him from a throw-in.

Cedric Soares scored on his debut to round off a victory that moves Arsenal within six points of Manchester United and Wolves in the race for the Champions League and within eight of Chelsea, who face West Ham on Wednesday.

Aubameyang forced goalkeeper Krul into action in the 10th minute but only the woodwork stopped them from going behind as Ben Godfrey's rasping drive crashed against the left-hand post.

However, their good work was undone when Aubameyang robbed Krul as he looked to clear his lines and rolled into an empty net to reach his half-century.

Just four minutes later he laid on the second for Xhaka, who fired in from close range to give Norwich a mountain to climb.

Emiliano Martinez denied the visitors a route back into the game as he spectacularly kept out Kenny McLean's free-kick and he was needed again a minute after the restart to deny substitute Adam Idah.

Norwich pressed admirably in their efforts to halve the deficit but Drmic's inexplicable pass put it on a plate for Aubameyang, who coolly slotted home to make sure of the points before Cedric's deflected drive added late gloss.

229 - It took Cedric Soares 229 seconds to score as many Premier League goals for @Arsenal as he did in 120 appearances for Southampton (10,090 minutes). Impression. pic.twitter.com/PxaTd48aKr

What does it mean? - Auba boosts Arteta

Mikel Arteta has made his discontent with Arsenal's form since the restart clear, though they now have three straight wins in all competitions, and they were unimpressive for long periods this time around. But Aubameyang made no mistake in punishing Krul to bring up his landmark and was clinical again for his second.

He is the sixth-fastest Premier League player to 50 goals and the fastest Arsenal player to that number in the history of the competition. Including the assist for Xhaka, he now has 21 goal involvements for the campaign, recording 20 for the eighth time in nine seasons.

50 - Pierre-Emerick Aubameyang has scored his 50th Premier League goal in fewer appearances (79) than any other @Arsenal player, and is the 6th fastest to this total among all Premier League players. Clinical. pic.twitter.com/YWjDZJzFsP

Though Arsenal's win had a degree of fortune, the spine of their side performed well. Martinez was excellent in goal, the defence was not threatened much, restricting Norwich largely to efforts from distance while Dani Ceballos and Xhaka shone in midfield, providing Arteta more reasons for cheer.

A Krul blow for Norwich

Norwich's effort deserved better than a 4-0 defeat, but it was an uphill climb after Krul took too long to clear his lines. Drmic's bemusing error ended the game as a contest, keeping the Canaries six points adrift of safety.

- Arsenal have never lost in 21 home Premier League games against sides starting the day bottom of the Premier League table (W15 D6) – the only ever-present side in the competition's history to have never suffered such a defeat on home soil.

- Norwich's defeat at the Emirates was their 100th Premier League loss in their 174th match away from home – in the competition’s history, only Sunderland (58%) have a higher losing percentage amongst all sides to have suffered at least 100 defeats on the road than the Canaries (57%).

- Since losing to Chelsea during Arteta's first game in charge at Emirates Stadium, Arsenal have won five of their last six Premier League games at home (D1), including winning four in a row for the first time since April 2019 (10).

- Since joining Arsenal back in 2018, Aubameyang has scored 14 goals in 14 games against sides starting the day in the Premier League relegation zone, netting a brace both home and away versus Norwich this season.

- Cedric became just the third different Portuguese player to appear for Arsenal in the Premier League, after Luis Boa Morte (25 apps) and Amaury Bischoff (1 app). He netted 229 seconds into his debut for the Gunners, as many Premier League goals as he managed in 120 appearances whilst at Southampton (10,090 minutes).

Arsenal visit Wolves in a huge game on Saturday while Norwich face what is surely a must-win encounter with Brighton and Hove Albion at Carrow Road.