Rashid Khan and Mujeeb Ur Rahman shared nine wickets between them as Afghanistan beat Scotland by 130 runs in their T20 World Cup Super-12 encounter. 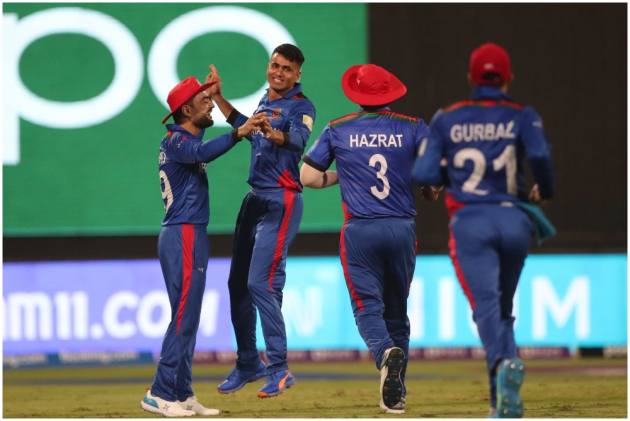 Batting first, Afghanistan rode fine knocks from Hazratullah Zazaib (44), Rahmanullah Gurbaz (46) and Najibullah Zadran (59) to post a mammoth 190/4 in 20 overs. In reply, the Scots were bowled out for 60 in 10.2 overs, thanks to some clever bowling by Rashid Khan (4/9) and Mujeeb Ur Rahman, who took a career-best 5/20 in T20 internationals.

“It’s important to win at the start of the tournament. This was our plan, to bat first and post a big total,” Mohammad Nabi said during the post-match media conference. “The world knows we have some good spinners in the form of Rashid and Mujeeb, they’ve played everywhere in the world.

“When we play the local tournaments, I, Mujeeb and Rashid are the most expensive bowlers. Mujeeb is playing his first T20 World Cup match and he got the Player of the Match award, that’s good to see, it's fantastic,” added Nabi.

Chasing a huge total, Scotland started well with openers George Munsey and skipper Kyle Coetzer putting 28 runs in the fourth over. But, once Coetzer was undone by a Mujeeb delivery, the rest of the Scotland batting fell like a pack of cards.

One down, Calum MacLeod went for a first-ball duck, before Mujeeb Ur Rahman picked his third in the over with the wicket of Richie Berrington on the last ball of the over. The wickets proved Scotland costly and they never recovered from the setback. Naveen-ul-Haq joined the party by dismissing Matthew Cross in the next over.

Mujeeb dismissed Munsey for 25 before he clean bowled Mark Watt to become the first Afghanistan player to take a five-wicket in T20 World Cups. Rashid picked up the wickets of Michael Leask, Chris Greaves, Josh Davey and Bradley Wheal for his 4/9.

“Very happy that we won our first match. This is my first World Cup game and I won the Man of the Match. The fans bring in a lot of energy and that's why we played positive cricket tonight,” Mujeeb Ur Rahman said after the match.

Earlier, it was an absolute carnage by the Afghanistan batsmen. Nabi emphasised that rotating the strike consistently made the job a lot easier against Scotland.

“Both the openers started well, we finished the Powerplay on a good note. The running between the wickets was good, we rotated the strike really well and Najib played well to help as post such a big total,” he finished off.