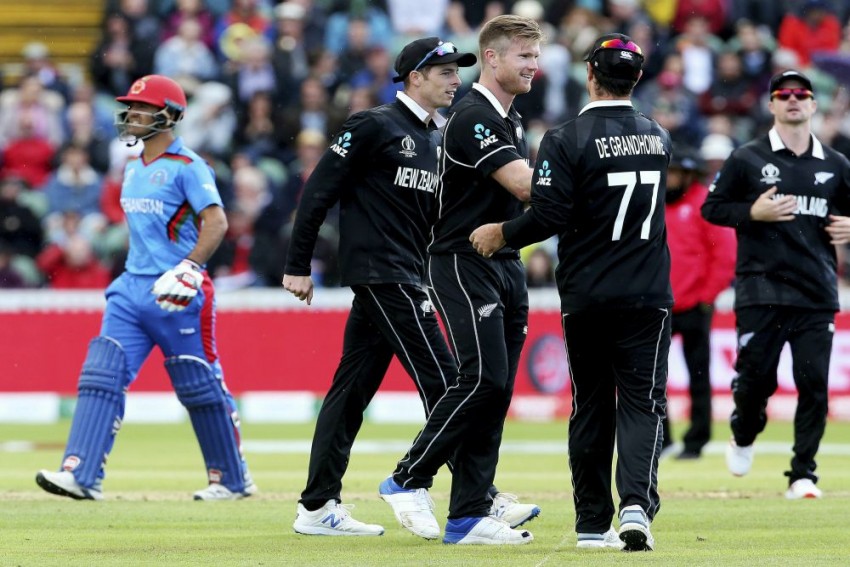 The Black Caps maintained their perfect record in the tournament with an emphatic victory at Taunton on Saturday.

Afghanistan were unable to pull off a shock, all-rounder Neesham taking 5/31 and Lockie Ferguson 4/37 as they collapsed to 172 all out.

Rashid played no further part as a precautionary measure after being struck on the helmet by a short delivery from Ferguson, the ball bouncing down and striking his stumps.

Aftab Alam removed Martin Guptill from the first ball of New Zealand's run chase and took 3-45, but captain Kane Williamson struck an unbeaten 79 to get his side home with 107 balls to spare.

Ross Taylor also made 48 in a comfortable win for a Black Caps side who are on course for the semi-finals.

What Does It Mean? Afghanistan Could Be In For More Pain

Rashid declared that Afghanistan would not fear any side ahead of the tournament.

They have fallen short so far, though, and a lack of runs has seen them only making in excess of 200 in one of their three matches - which ended in a seven-wicket loss to Australia.

Having lost wicketkeeper-batsman Mohammad Shahzad for the rest of the World Cup with a knee injury, they will be hoping Rashid is passed fit to take on South Africa next weekend.

Neesham Burst Puts The Brakes On

Afghanistan made an encouraging start after being put in by Kane Williamson, with Hazratullah Zazai (34) dropped by Taylor and Colin de Grandhomme in an aggressive knock.

The introduction of Neesham took the wind out of their sails, the all-rounder taking three wickets in a four-over burst as Afghanistan slumped from 66 without loss to 70-4.

Afghanistan totally lost their way, the runs drying up before heavy rain took the players off on more than one occasion.

Ferguson also came to the party as New Zealand tore through a fragile Afghanistan middle order.

The hostile quick became the leading wicket-taker in the tournament with eight scalps and also brought Rashid's participation to a painful end.

Rashid was left shaken after being rattled on the helmet by a rising delivery from Ferguson, who ended the innings by snaring Hashmatullah Shahidi (59) after the number four had struck nine boundaries in a patient knock.

Aftab came into the side for his first appearance of the tournament and could not have wished for a better start with the ball, getting Guptill caught at point.

The seamer also saw the back of Colin Munro (22), to leave the Black Caps 41-2, and cleaned up Taylor with a yorker.

Williamson was untroubled, though, finding the boundary on nine occasions in what was his first half-century of the tournament.