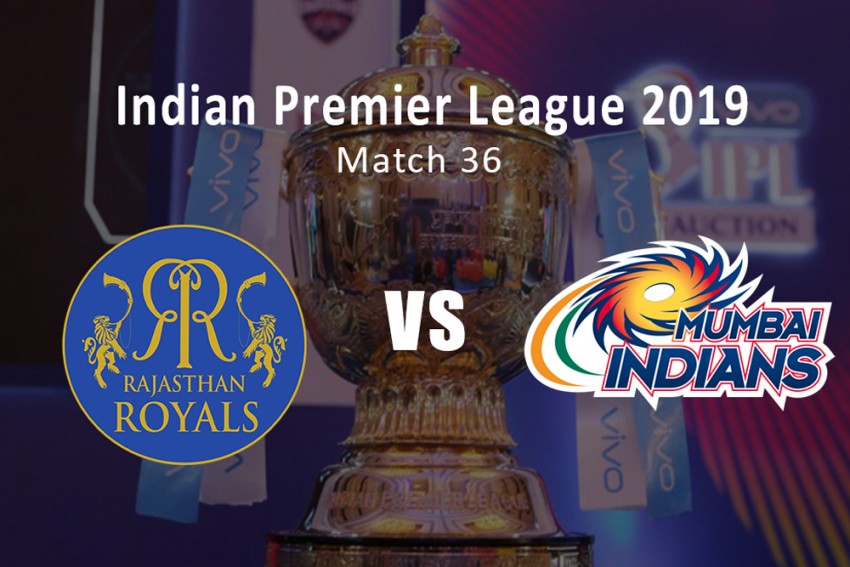 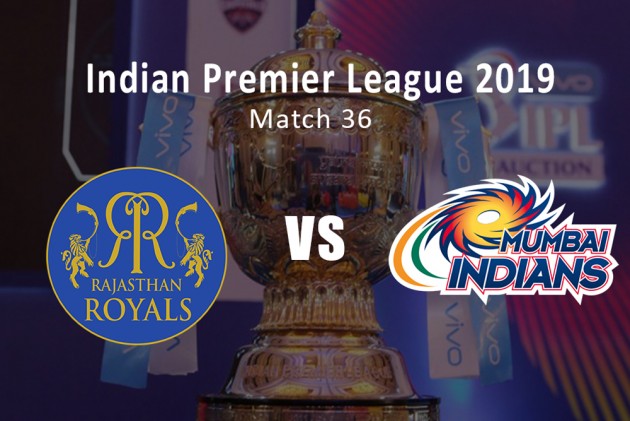 Rajasthan Royals will be glad that they were dominant against a formidable Mumbai Indians team. RR without their main batsman Jos Buttler, were clinical today. Steve Smith who has now been handed the responsibility of captaincy, played a captains knock. As usual, Shreyas Gopal was excellent with the ball for RR. MI, on the other hand, were probably 15-20 runs short. In the end, Smith (59*) was well supported by youngsters Sanju Samson (35) and Riyan Parag (43) and RR won the match by 5 wickets with five balls to spare. Catch the IPL 2019 highlights of the match Rajasthan Royals Vs Mumbai Indians here:

Rajasthan Royals have now 6 points on the board. This victory should motivate them and instill the confidence that they can now carry the momentum forward in search of a play-off berth. Starting with the bowling, Shreyas Gopal troubled the Mumbai batsmen. His wrong ones were a spectacle to watch. Jofra Archer was poor in the field today. He dropped as many as three catches.

Mumbai Indians couldn't get going apart from de Kock. There were regular fall of wickets. Their bowling looked ordinary apart from Bumrah and Rahul Chahar. This will be a wake-up call for Rohit and Co. on not to take any side lightly. MI are still second in the points table.

19:38: Ashton goes for a golden duck. Ashton's poor show continues in IPL. Two ducks in the first two IPL matches of his career. Bumrah traps him in front of the wicket. Stuart Binny comes in for RR. 5 singles off the next five balls. RR 158/5 after 19 overs. RR require 4 runs off 6 balls.

19:30: Hardik is in for his final over. Smith taps the ball in the deep mid wicket region. Batsmen scamper for a second. Parag is short of his crease. He departs for 43 off 29 balls (5x4,1x6). Ashton Turner comes in. Smith late cuts one behind backward point and the ball runs into the boundary. RR 153/4 after 18 overs.

Riyan Parag departs after a well-made 43 off 29 deliveries. pic.twitter.com/rqpsUqYsbR

19:25: Bumrah bowls a length ball. Smith stays back and guides it the fence between backward point and third man. Fifty for Rajasthan's captain Steve Smith. 8 runs off the over. RR 145/3 after 17 overs.

19:12: Chahar to bowl his last over. Half-tracker from Chahar and Parag rocks back and smashes in the cow corner region for a maximum. RR 128/3 after 15 overs.

19:07: Hardik continues. Length ball. Parag walks across the stumps, lap scoops the ball for a four in the fine leg region. Back-to-back fours. He slashes hard and the ball takes an edge and flies down the third man for a boundary. RR 118/3 after 14 overs. RR require 44 runs in 36 balls.

18:50: Markande continues. Smith gets a boundary off a short ball as he pulls it in the gap between long on and deep mid wicket. Riyan Parag is in. Short ball again and he puts it into the fence at deep mid wicket region. RR 86/3 after 9 overs.

18:46: Chahar is back. Sanju Samson goes for the big one. Holes out to Kieron Pollard at long-on. Samson departs for 35 off 19 balls (6x4,1x6). Ben Stokes walks in at No.4 for RR. Ben Stokes chops it back on to the stumps. It was a flipper. Too close to cut. And Stokes departs without troubling the scorers. Rahul Chahar has taken his chances and got into the playing XI due to Markande's injury. But now he seems like the prime spinner for MI. RR 77/3 after 8 overs.

18:42: Mayank Markande is introduced. Smith hits a maximum in deep mid wicket region.  Samson goes for the lofted drive, in the sweeper cover region and it sails over the ropes for a six. RR 75/1 after 7 overs.

18:36: Malinga is back. Maling is bowling short of a length and wide outside the off stick. Smith cuts one to the fence between the short third man and backward point. He punches another one in the point region for a boundary. RR 60/1 after 6 overs. Samson 28*(16), Smith 15*(8). Timeout

18:27: Rahul Chahar is into the attack. Wide outside the off stump. Rahane cuts it to the fence between backward point and the short third man. Rahane sweeps the next one for a boundary at square leg region. Rahane departs. Chahar is ecstatic. Rahane is caught by a diving Suryakumar Yadav at covers. Rahane 12(12).  Steve Smith walks in at No.3. Samson goes for the fine sweep that runs down the fine leg fence for a boundary.  MI 44/1 after 4 overs.

18:20:  Lasith Malinga introduced by Rohit Sharma. There is an appeal for LBW against Rahane. Umpire declines. Malinga forces Rohit to go for the review. Bad review there. The ball had hit a jumping Rahane's knee roll. MI lose their review. Slow ball from Malinga. Samson is beaten by the variation and so is de Kock. 4 byes. 7 runs off the over. RR 31/0 after 3 overs.

18:08: Hardik Pandya to bowl the fist over. Ajinkya Rahane and Sanju Samson to open the innings for RR.  Length ball, Samson goes for the pull. Doesn't time it well. The ball somehow runs down the mid-wicket fence. Samson follows it up with a cheeky shot. Late touch towards the third man, and it beats the short third man. Runs into the fence. RR 9/0 after 1 over.

17:48: Unadkat angles it wide from around the stumps. Hardik goes for the wild slash. Flies past the wicketkeeper, to the third man fence. Another length ball. Pandya hits it in the air towards the left of long on. Archer drops an easy catch again. That's three dropped catches for Archer today. Hardik goes over the bowler's head and the ball just manages to sail over the ropes. Six runs.  19 runs off the over. MI 152/4 after 19 overs.

17:38: Archer continues.  Strays down leg and Pandya flicks it over backward square leg for a boundary. Hardik takes a single. Archer follows it up with dour straight dot balls. Cutting struggling to give the strike back to Hardik. MI 133/4 after 18 overs.

17:33: Unadkat is in for his third over. MI will have to press the accelerator here.  Slower one from Unadkat. Pandya goes for the wild hoick, Archer misses a sitter of a catch at deep mid-wicket. Smith is unhappy. Short ball and Pollard smashes it for a six over Archer's head. Unadkat rolls his fingers and an early swing from Pollard. Completely foxed by the change of pace. And the stumps are rattled. Pollard departs for 10(7). Ben Cutting walks in and gets a boundary in the third man region. MI 128/4 after 17 overs.

17:24: Archer is brought back for the death overs. Tight over from him. Batsmen take a risky single and Rahane gets a direct hit. Hardik is just in. He survives. Just 2 runs off the over. MI 114/3 after 16 overs. Timeout

17:10: Binny is mixing up the pace and Suryakumar gets foxed in the first two deliveries. Low full toss and Suryakumar gets it over the bowler's head for a four. Short pitched ball and Suryakumar goes for the pull, only to be caught at deep backward square.  He departs for 34 off 33 balls (1x4,1x6). 7 off the over. Hardik Pandya comes ahead of Krunal today. MI 109/2 after 14 overs.

17:05: Gopal continues. Wrong one and QDK is beaten. There is an appeal for stumping. But QDK drags his foot back in time. Gopal is bowling according to the field and he has been exceptional. Just 5 runs off the over. MI 102/1 after 13 overs.

17:00: Unadkat is into the attack.  QDK launches it into the stands. It was straying down the leg and it was easy for QDK to smash it over deep mid wicket for a maximum. MI 97/1 after 12 overs.

16:47: Parag continues. Suryakumar smashes it straight over the bowler, right into the sight screen for a six. It was a carrom ball, and Suryakumar read it early. MI 72/1 after 9 overs. Timeout

16:30: Jaydev Unadkat is brought into the attack. It was a decent over. But Unadkat strays down the pads and the ball runs down the fine leg boundary after taking a deflection from Suryakumar's pads. MI 46/1 after 6 overs.

16:25: Jofra Archer is introduced by Smith.  QDK goes over the infield and gets a boundary in the deep extra cover region. MI 38/1 after 5 overs.

16:20: Kulkarni continues. QDK tears him apart. Three boundaries on the trot and the fourth delivery is pulled for a maximum over deep square leg. MI 32/1 after 4 overs.

16:15: Shreyas Gopal is into the attack. Strays down the leg, and Rohit sweeps it past the short fine leg for a boundary. Gopal and his wrong ones. Simply the best. Rohit comes down the track and he is foxed by the wrong one. Rohit pushed it with hard hands, and it is an easy caught and bowled for Gopal. Rohit departs for 5(7).  Suryakumar comes in at No.3. QDK goes for the big slog, doesn't time it. Jofra Archer runs in from long on but is unable to hold on to it. MI 13/1 after 3 overs.

16:08: Dhawal Kulkarni introduced into the attack from the other end. RR have kept a sweeper cover in the powerplay. Tight bowling from Kulkarni. MI 6/0 after 2 overs.

15:45: Rajasthan Royals have won the toss and they opt to bowl. Steve Smith will be leading Rajasthan Royals as Ajinkya Rahane has been sacked from captaincy. Ben Stokes comes in for Ish Sodhi and Riyan Parag comes in for Rahul Tripathi. Jos Buttler misses out as he has gone back for the birth of his child. For MI, Mayank Markande comes in for Jayant Yadav.

The @rajasthanroyals Skipper @stevesmith49 wins the toss and elects to bowl first against the @mipaltan.#RRvMI pic.twitter.com/FZy4lbRtPi

Rajasthan Royals will be heavily depending on Jos Buttler when they take on a strong and confident Mumbai Indians. RR's batting has miserably failed this season. Though Sanju Samson was the first Indian to notch up a century this season, he has been inconsistent. The likes of Steve Smith, Ajinkya Rahane and Ben Stokes have performed in patches, which has not helped the teams cause. RR will be hoping that their International stars put up a promising show.

In the bowling department, Jofra Archer and Shreyas Gopal have been exceptional. The others have just been leaking too many runs. Jaydev Unadkat, Gowtham, Dhawal Kulkarni need to be more disciplined with their line and length.

On the other hand, MI have a balanced side. They have one of the best bowling line ups in the ongoing tournament. Lasith Malinga, Jasprit Bumrah and Jason Behrendorff form the pace attack; while Rahul Chahar and Krunal Pandya make a good spin duo. Hardik Pandya has been lethal with his finishing skills. And Pollard has shown what he can do on his kind of a day.

Skipper Rohit Sharma will be glad the team is performing recently. With every individual contributing runs and the number of bowling options they have, Rohit will fancy a win against RR.

IPL 2019, RCB Vs CSK: When Is Next MS Dhoni Vs Virat Kohli Clash And How To Watch It?