Marcus Joseph scored two goals in either half to ensure the 2019 Durand Cup trophy in Gokulam Kerala's favor, who shocked local side Mohun Bagan in the Salt Lake Stadium. Meanwhile, Salva Chamorro scored his side's only goal. 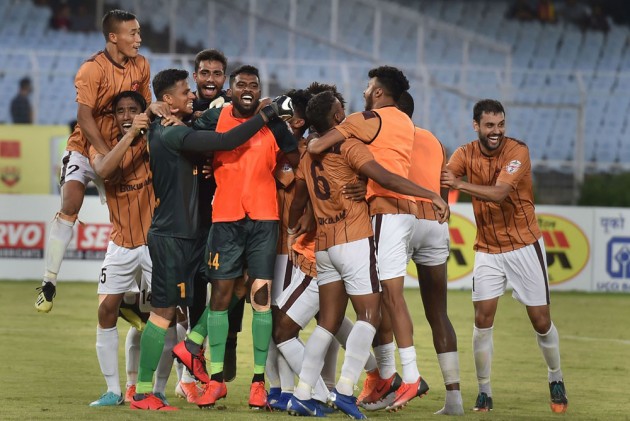 Trinidadian forward Marcus Joseph led by example with a brace to inspire Gokulam Kerala FC to Durand Cup title in their debut campaign with a 2-1 win over 16-time champions Mohun Bagan at the Salt Lake Stadium on Saturday.

Joseph converted a penalty in the 45+1st minute and doubled the lead with his menacing left-foot in the 51st minute.

Terribly let down by their defence especially in the first-half, the Mariners stepped up the attack after the changeover and pulled one back through Salva Chamorro header from a Joseba Beitia free-kick in the 64th minute.

Three minutes left on the clock, Kerala were down to 10 players when Jestin George was shown a second yellow card for a terrible tackle on Kima.

But their defence managed to hold on to their slender lead despite the numerical disadvantage clinch the Asia's oldest football tournament for Kerala for the first time after 22 years.

FC Kochin were the previous and the only Kerala club that won the trophy before while Viva Kerala, had participated in the tournament in 2007 only to exit in the league stages.

It was a tale of sorry state of defence led by Fran Morante as they crumbled under pressure especially when the ball came to Joseph and Henry Kisekka, who played for Mohun Bagan last season.

Mohun Bagan had better possession, more shots on target but failed to convert any as they went into the half-time conceding a stoppage-time (45+1st) goal by Marcus.

The Mariners last won the third oldest tournament of the world way back in 2000 defeating Mahindra United 2-1 by a golden goal from RC Prakash, while this was their first final appearance since 2009.

Following a tale of missed opportunities, Mohun Bagan goalkeeper Debjit Majumder made a mess of a one-on-one with Henry, when he pulled down his former teammate inside the box as referee Ajit Kumar Meitei had no hesitation in awarding a penalty to Gokulam.

Their left-footed captain, with two hat-tricks in the group stage, stepped up to convert from the spot with his shot to the right of an outstretched Majumder.

Six minutes into the second half, Joseph returned to haunt once again as he doubled the lead to take his goal tally to 11, something that virtually sounded a death nail for the 16-time champions.

The move was initiated by Naocha Singh from the midfield as there was another defensive lapse by two Mohun Bagan defenders who left a big gap to see Joseph making full use of the thorough pass.

The Trinidadian managed to stay onside and surge past Lalchhawnkima to slot it home with his left-footer with Mohun Bagan goalkeeper Debjit Majumder not able to cover the angle in time.

Earlier in the league stage, the 28-year-old had begun the team's campaign in emphatic style with a hattrick against Chennaiyin FC, followed by a brace against Indian Air Force in the next match.

Joseph brought up his second hattrick of the meet against I-League debutants from Manipur TRAU FC in their final league fixture to help the Malabarians finish with all wins from three matches to top Group D.

Chamorro delivered with a clinical header from Joseba Beitia's freekick as Ubaid fumbled to take an easy chance to see Mohun Bagan pull one back in the 64th minute.

A couple of minutes later, Joseph was set up brilliantly by Kisekka as he shot powerfully beating Mohun Bagan goalkeeper Majumder by pace but thankfully for the home side it missed the target by a few inches.

A desperate Mohun Bagan pressed on their attack and Jesuraj put a low cross to Fran Gonzalez but his shot failed to breach Ubaid who found himself well placed.