Spain Draw 2-2 With Morocco, Reach World Cup Round Of 16

Spain substitute Iago Aspas scored the late equalizer on Monday in a 2-2 draw with Morocco. 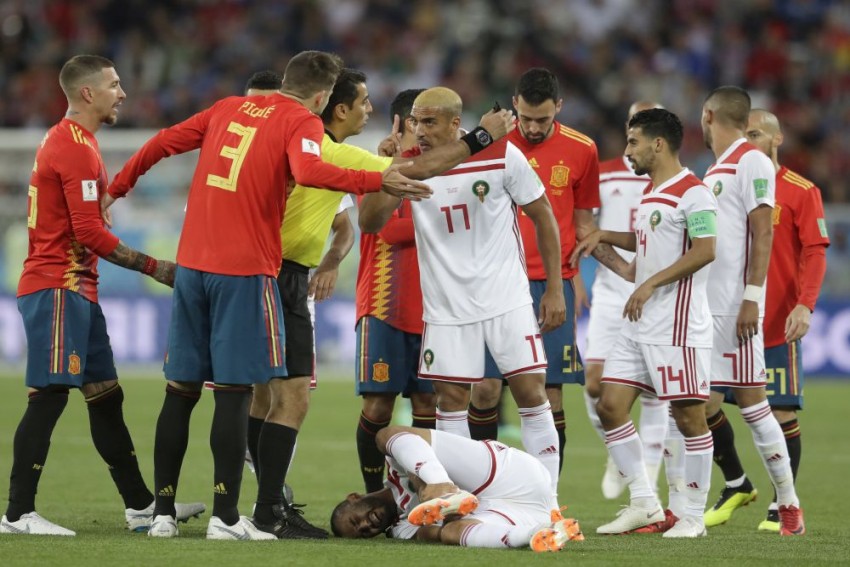 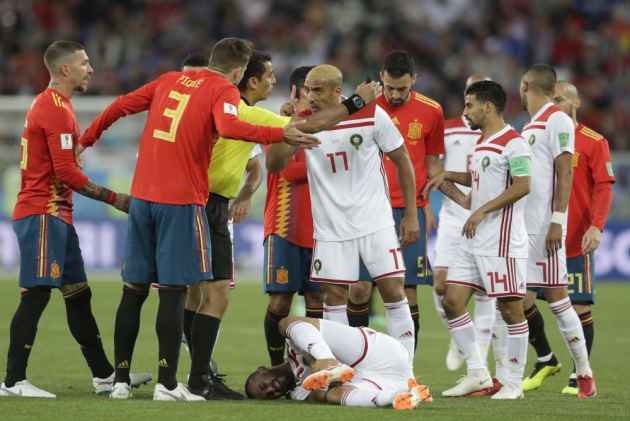 A video replay in injury time gave Spain the goal it needed to win Group B at the World Cup.

Spain substitute Iago Aspas scored the late equalizer on Monday in a 2-2 draw with Morocco. His clever deflection off a cross from Dani Carvajal was initially disallowed for offside, but the video assistant referee overruled the call at Kaliningrad Stadium. The decision set off a touchline melee among players from both sides.

Another substitute, Morocco forward Youssef En Nesyri, headed in a goal in the 81st minute to give already-eliminated Morocco hope of a victory.

Earlier, a mix-up by Andres Iniesta and Sergio Ramos gifted Morocco its first goal of the World Cup, with Khalid Boutaib pouncing on the loose ball and scoring in the 14th minute. Iniesta made amends five minutes later by setting up Isco at the other end to bring Spain level at halftime.

With Portugal also drawing with Iran, Spain progressed as group winner because it scored more goals and next plays host Russia on Sunday in Moscow, while Portugal plays Uruguay in Sochi a day earlier.

"We haven't really won anything yet. It's been a very tough match," Isco said. "Maybe we weren't focused from the very beginning. We needed them to score on us to force us to react." Spain may be through and is now on a 23-match unbeaten run, but it was far from convincing in group play and again displayed defensive frailties to concede twice against a Morocco team that hadn't scored a goal in its two previous group matches.

Earlier in the tournament, Cristiano Ronaldo scored a hat-trick against Spain in a 3-3 draw with Portugal and only managed a 1-0 win against Iran.

While Spain controlled the game against Morocco with 68 per cent of possession, Isco thinks that Spain can do better. "Maybe what we're missing to better control the game is more ball possession," the man of the match said. "Maybe that's what's missing. And that's normally something that we do much better." Morocco was playing for pride in Kaliningrad and they can leave the tournament having made a point against Spain's selection of stars.

"We would have loved to win over Spain," Morocco coach Herve Renard said. "This is why we came here tonight. We suffered, just like any other team who takes on Spain. When you look at the lineup, it's a mix of Real Madrid and Barca, so these are outstanding players."

Defending ruggedly and breaking out in fast counterattacks, Morocco was a constant threat and came close to taking the lead earlier when Noureddine Amrabat rattled the goal frame with a powerful shot in the 55th minute that David De Gea could only watch as it bounced down to safety.

De Gea was criticized after his blunder gave Ronaldo one of his three goals in Spain's draw with Portugal. But he proved his value to Spain in the second half — first denying Boutaib a second goal with a save at the near post and then punching away a dangerous ball in the 50th minute as Mbark Boussoufa tried to reach a cross.

Spain is through as group leader and faces Russia in the round of 16 at the Luzhniki Stadium in Moscow on Sunday. Portugal's 1-1 draw with Iran left Ronaldo's team second and facing a knockout match against Uruguay on Saturday in the next round.