'The Indian team did well in the five years he was at the helm of affairs. He is a tough man and the toughness also shows in his batting.' 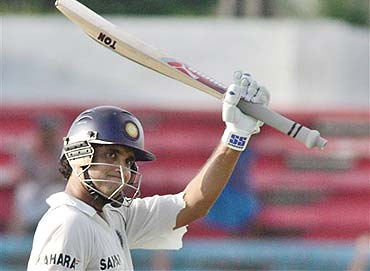 Impressed with the new-look Indian team, Bangladesh vice-captain and dashing willower Mohmmad Ashraful said the visiting side is high on quality.

Drawing a comparison between the present Indian team and the one that toured Bangladesh in 2004, Ashraful said the current lot was a more youthful one.

"There are several young players, new faces. But this team is also high on quality," Ashraful said in an exclusive interview.

While appreciating the youthful nature of the Indian team, Ashraful did not forget to mention one old warhorse in the rival squad he idolises the most.

"He is a tough man. He is tough as captain, and the toughness also shows in his batting," he said.

"The Indian team did really well in the five years he was at the helm of affairs. He is a top performer," said Ashraful, who has played 34 Tests and 101 ODIs for Bangladesh.

However, Ashraful shied away from making any comparison between Ganguly and current Indian skipper Rahul Dravid.

"It will not be proper. They have their own styles. And I don't want to get into any controversy," he said.

Ashraful felt Indian cricket would only gain if the BCCI managed to rope in Dav Whatmore as chief coach of the national team.

Describing Whatmore as a "good coach", Ashraful said the Australian was well-versed with Asian conditions and the mentality of the players of the region after working as a coach for 11 years -- first with Sri Lanka and then with Bangladesh.

"I think India will gain if it got Whatmore. He was with us for four years, he knows a lot about world cricket. He is a good coach," Ashraful said.

"He was with Sri Lanka for seven years and four years with us. He knows the Asian mindset very well."

Ashraful said his own team benefited a lot from Whatmore's coaching.

"During the last two-three years, we have improved a lot and he has contributed significantly," he added.

Asked if he had become a better player himself, Ashraful said "the good thing about Whatmore is that if any player is going through bad time then (Whatmore) would encourage him to find out his fault himself. He was never too overbearing".

Spelling out Whatmore's qualities, Ashraful said "he can inculcate self-belief and self-respect in players".

On whether Bangladesh faced any problems as Whatmore belonged to a different culture and spoke a different language, the Bangladesh bat said "never".

Whatmore is the front runner for the India job after Greg Chappell opted not to renew his contract post-World Cup.

'Injury Days Are Over'