Bravo to Yuvraj thanks to whom it was two runs to get off three deliveries at 197-9, with the previous two hit for successive fours - but a slower ball shattered the stumps and India's record breaking string of wins while chasing.

More from Ashish Shukla
View All

India saw their record sequence of successful chases snapped as the West Indies pulled off a dramatic one-run victory in the second one-day international on Saturday.

After restricting the hosts to a modest 198 for nine, India messed up the chase with some shoddy batting performance and were eventually bowled out for 197 with two balls to spare, leaving the five-match series tied 1-1.

The defeat ended India's streak of 17 wins while batting second while the lone exception among the batsmen was Yuvraj Singh whose well crafted 93 brought the team in sniffing distance of victory.

The Punjab left-hander slammed two fours in the last over when 11 runs were needed before being deceived and bowled by a slower one by Dwayne Bravo, triggering wild celebrations at the Sabina Park.

The failure of the batsmen to apply themselves on a pitch that had slowed down in the last two days undid the good work done earlier on the field. 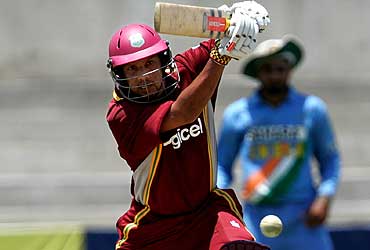 Man of the match Ramnaresh Sarwan's unbeaten 98 proved to be the fulcrum of the hosts' innings as it lifted them first from 43-4 and then 105-6 against some miserly performance by the Indian bowlers.

Put into bat for the second successive time, the hosts showed none of the belligerence of the opening match at the same venue while the Indians showed much more accuracy with the ball and intensity on the field.

India's new ball bowlers Irfan Pathan (3-45) and Ajit Agarkar (2-25) set the tone for the proceedings with their tidy opening spells.

Sarwan, who faced 138 balls and hit seven fours and a six, shared a 60-run stand with Marlon Samuels (19) and later in the closing stages stitched a valuable 38-run partnership for the seventh wicket with Carlton Baugh (21).

The vice-captain, who survived more than one run out chance, moved into his 90s in style collecting two fours and a six off Pathan in the 49th over.

But he was stranded two short of a century as Jerome Taylor failed to rotate the strike.

Yuvraj played a largely restrained innings which consumed 121 balls and included eight fours and a six.

Dismissed cheaply in the opener, he showed exemplary character to carry the Indian innings on his shoulders in energy sapping conditions.

He added 64 runs for the fifth wicket with Suresh Raina (27) in the middle overs to help side recover from the doldrums of 60 for four.

The left-hander then added another 47 runs for the eighth wicket with Ramesh Powar (12) that saw India rebound from 134 for seven to needing 22 runs of as many balls.

Ian Bradshaw, the best bowler on view on Thursday, proved to be the nemesis again, claiming 3-33 with his nagging length.

The left arm seamer did the early damage, having Virender Sehwag and Rahul Dravid in his new ball spell, before returning to remove Agarkar in the latter part of the innings.

The West Indian fielding was also sharper that helped the bowlers maintain the pressure on the Indian batsmen while defending a meagre total.

India won the toss and again chose to field, relying on their impressive record of successful chases, even though there was nothing in the conditions to favour the bowlers.

Neither Gayle (0), centurion from the previous game, nor captain Brian Lara (14) were of any use and but for the Sarwan-Samuels association, the innings could have been further in shambles.

Pathan set the trend with two successive maidens and the wicket of Runako Morton (1) with a delivery which kept low and found the batsman in front of the stumps.

Agarkar, in between those two overs, had provided India with the first breakthrough by inducing Gayle to flirt at an away delivery and edge it to wicketkeeper Mahendra Singh Dhoni for nought.

Lara flicked and square cut Pathan for two boundaries in successive overs but the latter had his revenge when he brought the left-hander forward and guided an easy catch to lone slip Dravid.

Shivnarine Chanderpaul clobbered Harbhajan Singh for two fours in the off-spinner's very first over but the latter got even with a delivery which sat up for the batsman to cut it hard but straight to cover fielder Mohammad Kaif.

Like Harbhajan, Powar too started poorly by conceding eight runs in his first over but then recovered to finish with 2 for 38 from his allotted 10 overs.

Harbhajan was similarly miserly and ended up with one for 32 from his 10 overs as batsmen couldn't come to grips with his variety and guile.

Pathan came back for his second spell to clean up Bradshaw (12) and Agarkar too chipped in with one in his final to leave the West Indies short of 200 runs.