The celebrated journalist says that as many as perhaps 1,000 Iraqis a week are dying across Iraq, while NYT and other media are busy highlighting the deaths of American soldiers. 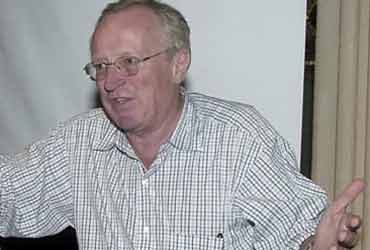 Robert Fisk, this is Juan Gonzales here with Amy. In speaking about civilian casualties, you've been doing several articles now on the story that is not being covered at all, especially here in the United States, which is the civilian toll, the lives being lost every day in Iraq as result of the U.S. occupation. Could you tell us a little bit about that?

Yes. I started doing this story here because, I'm doing series of articles, because I was very struck by an article that appeared in the New York Times last week that talked about the terrible toll of casualties over the summer months. It was paragraph three before I realized that the terrible toll applied only to 72 American soldiers in this country. And thousands of Iraqis civilians are dying by gunfire and other forms of violence in this country since April 9th, because of the anarchy and chaos let loose after the 'liberation' of Baghdad.

Again we don't need to be romantic about Saddam. It was his government that committed the crimes before the war. It's now Iraqis who are committing the crimes after the war, but the real problem is that there is no security, and what is happening is an absolute slaughter every night of Iraqi people, either murdered in revenge killings by thieves, gunned down at American checkpoints by trigger-happy U.S. soldiers, involved in family feuds.

I've just come, I speak to you now from a mortuary in Baghdad. They've just taken in 21 gunshot victims dead. I spoke to five of the bereaved families, all shot down with people trying to steal their cars or killed by thieves in the night, or killed in killings which were by persons unknown.

Weaponry is flourishing here. You hear the shooting every night. The whole of Baghdad is full of gunfire. I went to one hospital where the mortuary attendant told me that almost 40% of the total dead that come in to their mortuary are killed at U.S. checkpoints by soldiers, either because the cars approached too quickly to the checkpoints or because American troops come under fire and fire back at the civilians in the area without making direct contact with whoever is their aggressor.

One occasion recently for example, four days ago a woman and her child were brought dead to the hospital after they were killed by U.S. forces who opened fire at people who were shooting in the air at a wedding party.

Over and over again this happens. We had case about six weeks ago which I personally investigated, in which two men got too close, drove up to a U.S. checkpoint, it wasn't a usual check point, just a piece of barbed wire thrown across the road in a very poor suburb of Baghdad. The Americans opened fire at the car. When the car was burned out, I counted around 23 bullet holes in it. The bullets caught fire to the petrol, and I don't know if they were still alive or not, but the two passengers, both males were burned alive. They were burned to death anyway. I assume one of them or two may have survived as the car was burning.

As the car was on fire, according to those who saw it happen, the Americans packed up and abandoned their checkpoint. I went to the mortuary again afterwards and found these two skeletons with burned flesh, their identity papers long ago consumed by the fire. The car itself, and the registration plate had melted into the road. So again, two Iraqis families were waiting that night for loved ones who would never come home.

In one of your articles, Robert, you estimate that as many as perhaps 1,000 Iraqis a week are dying across the country, but that also you have trouble getting to the hospitals, the occupation are not allowing journalists or making it difficult for journalists to get to hospitals?

This means we're not in theory supposed to find out the figures. In fact we can get into the hospitals, because we know many of the doctors or there are other ways in, and usually the security guards are very sympathetic towards us. They're Iraqi. They want us to tell the story of this great tragedy for the Iraqis.

Yesterday, for example, the Baghdad city morgue which I just spent six hours in, yesterday they had 21 dead of whom 12 were killed by gunfire. This morning they had another five by 10:00 a.m., Baghdad time. If you add that up, and you turn into it a month of killings, you remember that there's 20 dead a day of gunfire being brought even to the Najaf cemetery, which is about 200 miles south of Baghdad who are killed by violence, not just of course by the Americans but family revenge killings, shootings by thieves, people trying to stop looters and get killed by accident caught in crossfire, you're talking at least 1,000 Iraqis dying every week.

But of course it's impossible, not just because of the restrictions placed on journalists going to the hospitals, but it's impossible to go to every hospital an every city of Iraq every morning and put together the death toll. But it's extraordinary.

I had one case this morning, a young man, only son of a Shiite from the very poorest area of Baghdad had been killed in his door, no one knew why. Four very, very angry Shiites arrived with his body at the mortuary, one of them in militia uniforms, I think he was a member of the so called Badr brigade. 'This is because there is no security. America doesn't want us to have security. It wants to divide our society. We won't allow it. We will explode ourselves against the Americans,' he said, he was talking about suicide bombers, This is a Shiite, not a Sunni from the Sunni Triangle.

So what is happening is that there is a growing feeling among Iraqis, at least those who are politically inclined, that the Americans do not want to stop the insecurity. Among those Iraqis who don't take such a conspiratorial view, there is a milder, but in my opinion, quite devastating view or attitude, that the Americans don't really care very much about the Iraqis. They might talk about bringing democracy, liberating them. But they care only about western soldiers who are killed. They don't really care about the lives of ordinary Iraqis.

And over and over again, we've had examples of people shot by the Americans at checkpoints, and the Americans have not even bothered to find out who they shot down, who they killed, who they wounded. They're not on the streets at night. We had one very sad case the other day of man whose family I spoke to, who did survive, he was a night watchman of a building, his factory was attacked by looters. He fired back at the looters, and the Americans turned up and shot him in the chest. He's now just undergone two days ago his second operation to save his life. But he hasn't once been visited by American forces. No one said, sorry. No one says, would you like some compensation, we can help you.

In some cases we do know, especially in outlying and very tough areas, the Americans and other western forces have offered and given money, compensation to families of those they killed. I think the Americans were doing that to the policeman, at least eight of whom were killed by U.S. third infantry division near Fallujah on Friday of last week, Thursday of last week.

Outrageously for a long time the Americans just said they had no information about the killings. Long after we'd gone there and established that it was all U.S. ammunition from an infantry unit that was used to kill the policeman. At one point I found a policeman's teeth and brains beside the road. Had they been American brains and teeth, I don't think they wouldn't have been left there.

It's this overall feeling not so much, and I don't go along with conspiracy theories that the U.S. wants a civil war, wants to divide people, wants violence, no. Because they also become victims on it there on an infinitesimally smaller scale than Iraqis. But Americans just don't really care about Iraqis. And that is the cancer that is eating into this society now.

'The Failure Of Non-Violence Bothers Me'