These 5-4 votes are too hard on our nerves. Think of the chaos if we conducted presidential elections this way! 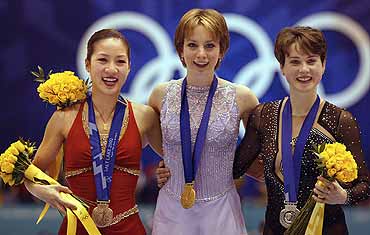 You knew the evening would turn weird when NBC's cameras momentarily lost track of Hungarian figure skater Julia Sebestyen. With the eyes of everyone on the planet, with the apparent exception of the network's director, trained on the "long program," NBC appeared for agonizing seconds not to realize that Sebestyen had skated out of the picture, then searched frantically for the lone athlete, whose bright red costume somehow eluded a succession of shots.

Too bad. While not a favorite for a medal, Sebestyen is plenty good enough to be worth watching even if she wasn't mighty easy on the eyes.

It's one thing to show a head shot when the skater is doing intricate footwork, or to focus on feet just when pairs skaters are doing a dramatic overhead lift. "Even Homer nods," as Alexander Pope reminds us. And no one really frets when NBC zooms in on the faces of skaters when they've just finish their programs and are trying to catch their breath, with snot dripping from their noses. That goes with the territory.

But video-taped shots of empty ice as backdrop for voice-over narration while the action continues off camera, italicized by the word "Live" displayed onscreen, hours after the fact, are a bit over the top.

One could imagine the screams coming through the snakes of wire running from the truck parked outside the venue. "She was alone in the goddamn arena, for God's sake. Dressed in sparkles and glitter. Where the hell did she GO? Did she fall through the fucking ICE?"

All was forgiven, of course, as soon as Sarah Hughes came out for her program. The instant she finished her routine, it was clear to everyone that unless Michelle Kwan or Irina Slutskaya skated blindfolded and with their hair on fire, the gold was going to Hughes, even if she had sucked eggs on her short routine a couple of nights earlier. No way could the judges permit blatant perfection to finish second (or third) behind people who turned in visibly inferior performances, especially not after what had happened earlier in the pairs competition -- although, granted, awarding a second Gold Medal to Canada's Sales and Pelletier merely for not stumbling was a little like giving half the Nobel Prize for Literature to the survivor of a spelling bee.

It took the judges a while to work out the math so that Slutskaya would beat Kwan, but not by enough to put her ahead of Hughes. (If that's not what they did, it was a reasonable facsimile thereof.) Had Slutskaya won the short program, as many people indeed thought she had, the math challenge for the judges would have been more complex but not impossible.

Never mind the rules and the Byzantine scoring procedures. The fact is, whoever won the long program was going to win the gold.

Until about 10 or 12 years ago, I am reliably informed, the skaters were required to perform something called "school figures" that counted heavily in the overall score. The skaters had to skate around slowly, make something like a "figure 8" on the ice, then skate over it again. A judge on skates would determine whether they "stayed inside the lines" and give them a mark. Since this was only a little less boring than watching paint dry, it was seldom shown on TV.

The end result was that a skater might stumble into a 4th or 5th place finish in the long program -- and skate away with the gold medal because of her performance in the "school figures." Something like having the national championship in football decided by a written test taken by the athletes before the game.

Imagine, if you can, the scandal of waiting (and remember, this tape-delayed thing ended at 11:30 p.m. on the West Coast) breathlessly for Slutskaya's scores, then watching Hughes squeal in amazement, only to be dryly informed that scores in the "school figures" had vaulted someone who had just landed on her butt three times into first place.

At least we were spared THAT.

One can only hope the powers-that-be succeed in putting some transparency into this process of selecting winners. These 5-4 votes are too hard on our nerves. Think of the chaos if we conducted presidential elections this way!

(David Vest is a regular writer for CounterPunch, where this piece first appeared, as well as a poet and piano-player for the Pacific Northwest's hottest blues band, The Cannonballs)