Silence Of The Deoband Lambs

While the Deoband declaration saying "there is no place for terrorism in Islam" and further decision to organize more such meetings to mobilize people against terrorism has been generally welcomed, questions remain... 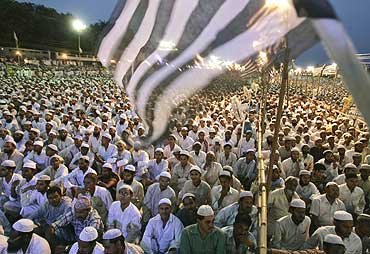 Since the emergence of Taliban and particularly after September 11 attacks in New York, Darul Uloom Deoband has received considerable attention from the media and has acquired the reputation as the main source of inspiration for Taliban brand of terrorism. The Taliban were not educated or trained in Deoband, but in the Pakistani Madrasas where they received education were founded and run by Deoband alumnis.

Dr Sohail Abbas a leading Pakistani clinical psychologist in his recently published study, titled Probing the Jihadi Mindset based on personal interviews of 517 Mujahideen who were arrested in Afghanistan and later lodged in two Pakistani jails, asserts: "The figures on rural/urban Jihadis become even more interesting as all the jihadis, barring just a few, belonged to the Deobandi school of thought: suggesting that even in the villages its influence cannot be underrated."

In this background it was most appropriate on the part of Deoband to take the initiative to organize a conference against terrorism and decry violence perpetrated in the name of religion. This conference held in February was attended by more than 10,000 representatives of about 5000 Madrasas from all over India. The conference adopted a declaration saying "there is no place for terrorism in Islam" and further decided to organize more such meetings to mobilize people against terrorism.

This Deoband conference against terror has elicited a generally positive reaction. But people who claimed to know better reserved comments. One such person when probed by me, referred to Hedaya, the famous 12th century compilation of Hanafi Law. He said that this book, part of Deoband's academic curriculum, prescribes unabashed aggressive wars as against the concept of defensive wars in Quran. Further, he said that laws as enshrined in Hedaya are not on the statute books of any Muslim country today. Even in India, only the family laws of Hedaya are applicable to the extent of their being in conformity with the Constitution of India. There cannot be any objection to the study of Hedaya as part of the history of development of law, but Deoband teaches this book as something that is sacred and integral to religion.

After hearing this criticism, I decided to seek enlightenment from Deoband through their Darul Ifta (Department responsible for issuing fatwas and responding to queries) and sent a query on their website on 22nd March 2008 in which, among other things, I gave following specific references of Hedaya:

"The destruction of the sword is incurred by infidels, although they be not the first aggressors, as appears from various passages in the sacred writings which are generally received to this effect." (Vol II P41)

"When the Muslims enter the enemy's country and besiege the cities or strongholds of the infidels, it is necessary to invite them to embrace the faith, because Ibn 'Abbas relates of the Prophet that he never destroyed any without previously inviting them to embrace the faith. If, therefore, they embrace the faith, it is unnecessary to war with them, because that which was the design of the war is then obtained without war. The Prophet, moreover, has said we are directed to make war upon men only until such time as they shall confess, "There is no God but one God." (P43)

After giving few more references I requested them to guide me on how to dispel the misgivings of those who suffer not from any religious prejudice and acknowledge that Islam is a religion of peace, but who feel genuinely concerned about the syllabus taught in Deoband. The Darul Ifta was kind enough to send me a Fatwa ID Number with an assurance that the query will be answered but so far have refrained from giving any reply.

'The UPA government Has Unleashed Economic Terror On The Nation'