Sharif, Daughter Arrive In Lahore After Being Released From Jail

Sharif, Maryam and Safdar were escorted to the Benazir Bhutto International Airport in black limousines amid tight security. 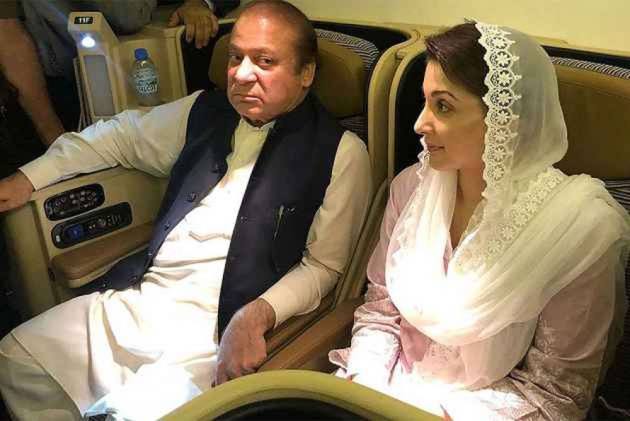 The move comes hours after the Islamabad High Court (IHC) ordered the release of the trio in connection to the Avenfield reference case.

Sharif, Maryam and Safdar were escorted to the Benazir Bhutto International Airport in black limousines amid tight security. They were accompanied by workers from the Pakistan Muslim League-Nawaz (PML-N), who were celebrating by chanting slogans and showering rose petals on their respective vehicles, Geo News reported.

The trio then boarded a special plane for Lahore, where they were given a warm welcome by the PML-N cadre.

Sharif, who was seen sitting in a vehicle, waved his hands as the workers continued to chant slogans victoriously. As the party reached Jati Umra, the residence of the Sharif family, many people gathered in huge numbers to catch a glimpse of the three-time Pakistan prime minister.

During the verdict on Wednesday, a two-judge bench comprising Justice Athar Minallah and Justice Miangul Hassan Aurangzeb of the IHC heard the petition challenging the sentence in the Avenfield reference, which got suspended due to lack of evidence.

The bench ordered the release of Sharif, Maryam and Safdar and directed the three persons to submit bail bonds worth Rs 0.5 million each.

On July 6, Sharif and Maryam were convicted in absentia in the Avenfield case by the Accountability Court. Apart from serving jail sentences, fines of eight million pounds and two million pounds were slapped on the father-daughter duo, respectively. Safdar, on the other hand, was given a one-year sentence but exempted from paying fine.

The case had pertained to Sharif family's purchase of the upscale Avenfield apartments in London.