Yet to cement a regular place in the ODI squad but the sprightly Kerala paceman believes he has an important role to play in India's scheme of things in the World Cup. 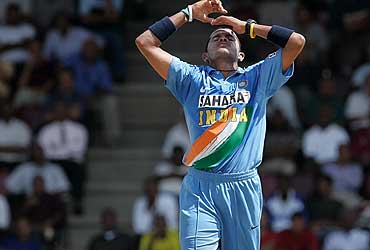 outlookindia.com
-0001-11-30T00:00:00+05:53
S Sreesanth is yet to cement a regular place in the one-day squad but the sprightly Kerala paceman believes he has an important role to play in Team India's scheme of things in this World Cup."I have set a goal for myself and I am sure it's going to help the team. I have been working on it and I'm sure I will play a big role in the World Cup", said a confident Sreesanth.

Sreesanth is not an automatic choice in the shorter version of the game and the youngster starts only as the fourth option after Zaheer Khan, Ajit Agarkar and Munaf Patel.

The Kerala speedster's propensity to bowl a fuller length serves him well in Tests but the same ploy is not working in one-dayers where the batsmen are tonking him over the head of a restricted field.

The pacer, however, believes that of late he has got a solution and the results are very encouraging.

"One of the things I did to get my length right was to bowl from within the crease in the last couple of one-dayers in India, as well in the practice games here. I think it's working fine", he said.

Sreesanth admitted it would be quite hard work for the bowlers trying to bowl the perfect length on the slow Caribbean wickets.

"I was lucky to play in all the games here last year. What I learnt is that you have to be really patient on the slow wickets here. You shouldn't really try to get wickets, but wait for the wickets to come your way," Sreesanth said.

"The grounds are small and wickets are really slow, so you have to work doubly hard as a fast bowler," he said.

"More than bowling fast, you have to use your common sense and play with your brains, you will do well," he added.

Sreesanth also acknowledged the enormous help which Sourav Ganguly passes on to him in his quest to become a better fast bowler.

"Dada has been more of an all-rounder, so he knows exactly what a bowler should be doing. He tells Zaheer (Khan) 'If I had your pace, trust me, I would have got many more wickets.'

"Seniors like Zaheer and Ajit Agarkar keep helping us, even in the nets. When you really go off in the nets, they come and talk to you. Not just the bowler, Sachin paaji and Rahul bhai too offer valuable advice," said the pacer, who will be playing his first World Cup.