Australia beware! An exceptional performance by the three seamers skittles out Sri Lanka for just 109 as India record their second biggest-ever victory margin. 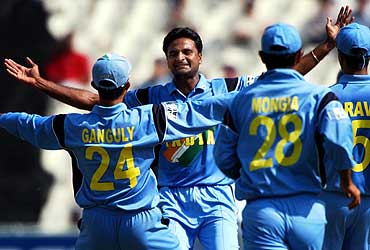 India sent the alarm bells ringing for front-runners Australia with a crushing 183-run defeat on Sri Lanka in a Super Six match at The Wanderers in Johannesburg today to storm into the semi-finals of the World Cup.

Riding on an exceptional bowling performance by the three seamers, India skittled out Sri Lanka for just 109 runs in 23 overs to record their second biggest-ever victory margin.

Sachin Tendulkar had earlier propelled India to 292 for six, becoming the highest scorer in a single World Cup in the process even though he missed his 35th one-day ton by just three runs. Virender Sehwag and captain Saurav Ganguly also came up with handsome scores as India made Sri Lanka pay dearly for their decision to field first on winning the toss.

The victory catapulted India to 16 points on the Super Six table and also enlivened the possibility of a title clash with Australia at this very ground on March 23.

So pathetic was Sri Lanka's batting performance that the 21 extras were the second highest contributor to their total, behind top-scorer Kumara Sangakkara who made 30 runs. The other important scorers were the number 10 and 11 batsmen Muttiah Muralitharan (16) and Dilhara Fernando who started hitting out towards the end with the result only a formality.

Srinath, who now has 14 wickets in this tournament and is joint fourth leading wicket-taker with Australian Glenn McGrath, struck twice in his very first over to send back in-form Marvan Atapattu and youngster Jehan Mubarak.

Mahela Jayawardene's misery in this World Cup continued when he fell leg before wicket to Zaheer Khan in the third over to leave Sri Lanka panting at 3-3. Srinath then broke the back of Sri Lanka in the next over, trapping the dangerous Aravinda de Silva leg before wicket. None of the first four batsmen to be out could score any run.

At 15-4 in the fourth over, Sri Lanka's cause was all but over. Their slim hopes of even putting up a respectable total were dashed when their captain Sanath Jayasuriya was sent back by Srinath in the eighth over with the total on 40.

Nehra, who had claimed six wickets in the game against England, then ran through the lower middle order to hasten Sri Lanka's demise. Both Nehra, who now has 12 wickets in this World Cup, and Srinath finished with figures of four for 35. Zaheer Khan's two wickets cost him 33 runs.

So effective were the three medium-pacers that the Indians did not even need to call on the services of any other bowler.

Sri Lanka were in real danger of being bundled out for their lowest-ever score to India when they collapsed to 78 for nine. But some slogging by Muralitharan and Fernando, who put on 31 runs for the last wicket, ensured Sri Lanka safely crossed the 96 runs they had scored against India at Sharjah in 1984.

However, the result left them precariously placed in the race for the semi-finals. Their fate hinges not only on their last Super Six game against Zimbabwe but also on the result of games involving other teams like Kenya and New Zealand.

The performance of the bowlers completely overshadowed an equally efficient batting display by the Indians. Tendulkar and Sehwag provided another flying start to the team, putting on 153 runs for the first wicket in 27 overs.

After Sehwag was out for 66, made from 76 balls with five fours and three sixes, Ganguly joined Tendulkar in a 61-run partnership for the second wicket.

Ganguly played a fluent 48-run knock, which was studded with two fours and two sixes.

However, it was Tendulkar once again who stook out with his brilliant batting performance. He did not exactly hammer the bowlers as he did in the game against Pakistan but was equally effective nevertheless, scoring easily and freely.

It was only after the duo had bettered their previous best opening partnership of 134 runs that Sehwag launched into the attack mode. Sehwag, whose previous best score in this tournament was 36, struck two sixes in an over from Jayasuriya.

Even as Tendulkar asked his partner to keep his cool, Sehwag attempted another big hit against Muralitharan but the wily off-spinner foxed him with an away-going delivery that resulted in a catch at long-on by Aravinda de Silva.

Ganguly, fresh from a century against Kenya in the previous game, signalled his arrival on the crease with a stunning six against Nissanka when he was yet to reach his double figures.

Tendulkar, at the other end, had slowed down considerably after reaching his 80s and concentrated on picking up the singles and twos. However, his 35th one-day century was not destined as he top-edged a de Silva delivery for wicketkeeper Kumara Sangakkara while trying to sweep.

This was the second time in this tournament that Tendulkar had got out in the 90s. He had been dismissed for 98 runs in the match against Pakistan.

However, Tendulkar did become the highest run-scorer in any single World Cup. When he moved from 46 to 50 with a boundary, Tendulkar aggregated 524 runs in this tournament, going past his own previous record of 523 in the 1996 World Cup at home.

After today's innings, Tendulkar's total stood at 571 runs -- miles ahead of nearest competitor South African Herschelle Gibbs who has 384 -- and he still has at least two more innings to play.

Tendulkar already is the highest scorer in all World Cups with an aggregate of 1630 runs from 30 matches.

When Tendulkar was out in the 39th over, India were placed at 214 for two and seemed well set for a score in excess of 300. However, some tight bowling towards the end by Vaas and Muralitharan stopped them short.

Vaas, who had 16 wickets at the start of this match, clean bowled Ganguly and Yuvraj Singh to finish with figures of 2-34 from his 10 over. Muralitharan claimed three wickets for 46 runs.

Mohammad Kaif scored 18 runs while Rahul Dravid, who came at the fall of Yuvraj Singh (5) in the 46th over, remained unbeaten on 18.