That's the mantra the RBI and the Fin Min are chanting as they don't want us to shop till we drop, freaking out with our credit cards. So pause for breath before committing to the next new car or any drool-object on hire-purchase. For now. 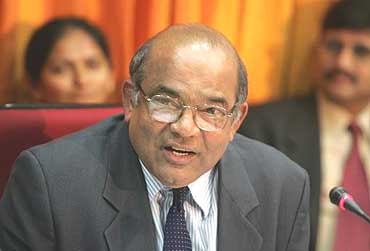 Two rate hikes in less than 50 days haven’t happened in the recent history of Reserve Bank of India (RBI). So Tuesday’s 25 basis point hike in both repo and reverse repo rates (RBI's short term lending and borrowing rates to drain excess liquidity), coming after a similar hike on June 8, is a record of sorts. With finance minister P Chidambaram defending the move strongly, amid announcements by banks and housing finance companies hiking lending rates, it does look like we are deep in the throes of high-cost credit-ruled life.

The reverse repo has now traveled to 6 per cent from 4.75 per cent on October 27, 2004. The rep rate is at 7 per cent. Although the markets had factored in the hike, many bankers and analysts felt otherwise - as the hike was too soon, making it the sixth rate hike by RBI Governor Yaga Venugopal Reddy in a space of less than two years. But the record high oil price of $75 a barrel—"major risk to headline inflation"—and the rupee’s volatility —it touched a three-year low against the dollar last week, with fears of a rapid depreciation—simply had to influence the decision.

But thank RBI for small mercies: the expected 50-point hike in the cash-reserve ratio (CRR), which would have put a more severe credit-squeeze and affected bank balance-sheets, did not come about. That is as well, because on its path to increasing and full convertibility, the RBI is committed to cut CRR to three per cent from the five percent it is at now (though it has still to give out a roadmap for that, as PHD Chamber secretary general Bibek Debroy points out).

Along with the rate hike, the RBI continues with its cautionary focus on monetary policy. It also says that it wouldn’t hesitate to give priority to "demand management, price stability, inflation expectations, and financial stability" even if "maintaining the growth momentum is of the highest importance." It lists the central banks that have been hiking rates—in the US, Euro area, Japan, Canada, Australia, China, Korea and Chile—and the banks that have preferred to keep them steady—in England, Malaysia, Thailand and Singapore, and says that this time, it chose to go in for a modest increase.

While this focus could continue for another year at least, interest rates are on way to peaking out. With repo rates at 6 plus, the RBI will have to take a stand on the bank rate soon, currently also at 6 per cent. Then there’s the busy season credit demand to consider. While its true that the share of housing and personal loans in overall bank credit is 15 per cent of outstanding bank credit, there is as yet no strong evidence that all this money is chasing hot air. With companies still seeing record profits, corporates are depending more on internal cash, stock market or even overseas capital. Naturally, bank credit is veering more towards retail sector.

According to a CRISIL study, until 2003-04, credit growth appeared to lead GDP growth in India by four quarters. However, the relation between credit and GDP has weakened since the first quarter of 2004-05, possibly due to this change in industrial financing. As a result, the credit boom has not totally worked on GDP growth but instead led to asset price inflation (crazily high property rates, for instance).

Successive rate hikes have actually had a small effect on credit demand in the current year—non-food demand grew 1.1 per cent in April-July compared to 5.4 per cent in the same time in 2005. But the trend needs to develop for some more time before the RBI can signal an end to the rate hike regime. Meanwhile, consumers should look to benefiting from the growing savings rates. And lenders would do better to look at the long term.