Sixty-two years after her death, an unknown village girl has suddenly become the center of the world's attention. Was it just a political move on the part of the Vatican to satisfy the Syrian Malabar Church? Or was it also aimed to stem the tide of t 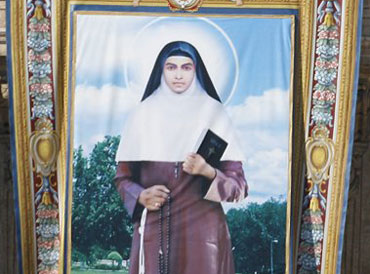 Even in her wildest dreams, Annakutty from Bharananganam village near Kottayam in Kerala may not have imagined that one fine day more than hundred thousand people would throng her tiny village to honour her. Sixty-two years after her death, this unknown village girl has suddenly become the center of the world's attention – at least of the Roman Catholic part of it.

All throughout her short and eventless life Annakutty, who later became Sister Alphonsa, looked a picture of misery. After disabling herself at the age of 13 to escape forced marriage, she suffered from extreme weakness and various severe illnesses as well as from the cruelty of the sisters of the Franciscan Clarist convent in which she silently vegetated till her death at the age of 36. There were only 12 participants at her funeral, most of them ex-officio. This shows that she was not very popular then.

Four decades later, John-Paul II, the most prolific saint-maker among all the popes, travelled to Kottayam and beatified her. When he died, leaving behind a stunning 482 new entrants in the annals of sainthood, she was among the 'blessed ones" in the pipeline. There were many of them, most prominently Mother Teresa, believed to be on the "fast track". But Annakutty, meantime Blessed Alphonsa, who had no spectacular deed whatsoever to her credit, overtook the heavy weight from Calcutta. What prompted the Vatican to elevate this unlikely candidate to the rank of a saint?

The poor girl's canonization may look like poetic justice -- however, she got in with bad company. It is a dubious honour to be lined up with the likes of Alojzije Stepinac, archbishop of Zagreb and key collaborator of Ante Pavelic's fascist Ustasha regime that massacred during the second world war hundreds of thousands of humans who happened not to be Catholic (he was beatified in 1998). Of course, not all in this motley crowd are sinister figures of this calibre. There are also some rather harmless psychopaths and small time tricksters among them. Take for example the Italian Saint Pio of Pietrelcina, revered for bearing what he claimed to be Jesus' bleeding wounds - but what stands exposed by documented testimony of his pharmacist (till recently neatly tucked away in the Vatican archives) to be nothing but self-inflicted needle work. Indeed, Blessed Alphonsa, the blank slate, stands out as one of the purest and least tainted members of the controversial club. But what brought her in? A miracle?

Her official "ticket" to canonization was the alleged healing of a boy's club-foot in 1999. But there is a history to this story. Shortly after her silent demise in 1946 spread a rumour that Sister Alphonsa, who had once crippled her own feet in a pit of burning chaff, had posthumously healed a child's deformed foot upon prayer at her tomb. Over the years, she established her presence in the popular rubric of "favour received" advertisements in the Christian press of Kottayam for allegedly curing hundreds of troubled little feet. That was when the Church authorities discovered her. The deposits at her modest tomb grew so impressively that the Vatican appointed a special vicar in 1952 to send them to Rome. It is said that he had already sent some 14 million dollars, when Pope John-Paul decided to beatify her, multiplying the revenue. But there is far more to Alphonsa's canonization than her handsome "dowry".

Alphonsa belonged to the rich and powerful Syrian Malabar Church that rules Kottayam district. This Eastern Catholic denomination is part of the Vatican empire since Vasco da Gama's time, but has kept its traditions intact and never completely succumbed to the "latinization". Till 1968, their clergy held mass in Syrian language, and till today, they can't agree with the Vatican on the question whether the clergy should face the people or the altar during mass. They own institutions, real estate and big plantations and have enormous economic and political clout as compared to the far bigger Latin string of Catholicism that evolved out of the poor costal fisher communities, converted in 16th century by the Portuguese. Alphonsa's canonization is a political move to satisfy the Syrian Malabar Church and to strengthen its ties with the Vatican. To serve this purpose, she has been styled as a symbol of harmonisation. Official church reports speak about the "great oriental and western traditions, Roman and Malabar, which Sr. Alphonsa lived and harmonised in her saintly life". It is obvious that the unity of these two wings of Catholicism is of immense importance now.

Kottayam district has by far the highest Christian population in the country (46%) and is often called the Vatican of India. It is the center of recruitment of Catholic nuns and priests. Most of the nuns belong to the poorer section of the rich Syrian Malabar community. They cannot think of raising the fabulous sums that the well-off families give their daughters as dowry. If they cannot afford the other established option either -- to pay for their education as professional nurses -- they are left with no socially accepted solution other than forcing the young girls – too young to decide for themselves – in convents.

Nuns from Kottayam make up 95% of the "soldiers of proselytism" who keep Catholic institutions like schools and hospitals, all over India, running. In fact, Catholic nuns (and priests) from Kottayam are exported to Europe and USA to fill the gap that the dramatic fall in the numbers of western recruits has torn in the fabric of the Roman Catholic Church. In February 2008, the Vatican's official mouthpiece, L'Osservatore Romano, rang the alarm bells. According to new statistics, the decline of the number of nuns worldwide was accelerating as never before. During the pontificate of the late Pope John-Paul II, it had already fallen by one fourth, then by another ten percent. Now it had come down to just 750,000. (Consecrated men worldwide were even down to 192,000 - including monks, priests and vicars). With nearly no new recruits who could replace those who die, or decide to abandon their vows, Catholic nuns seem to be moving towards extinction. The average age of nuns in USA is 70 years. And only five percent of them teach in Catholic schools, so that the main source of recruitment is out of reach. In this situation, the Vatican's only hope is India, which means Kottayam. With the canonization of India's first female saint, Pope Benedict hopes to apply the emergency brake to stem the tide of the world wide dramatic decline in the numbers of nuns.

Alphonsa is being presented as a role model to young girls. During the celebrations, thousands of little school girls are dressing up as nuns and play Alphonsa. She has become the patron saint of many schools. Her life is dramatized in books and on CDs, in documentary films plays and a weekly TV serial. What is highlighted is always Alphonsa, the teacher, the darling of all little children, though she was all throughout her convent life so bedridden that her attempt to work as a teacher was limited to less than one year. The glorification focuses on her special character that makes her a suitable new idol for young nuns: an example in humility, obedience and forbearance, desiring to be unknown and hidden and to suffer all pain and ill-treatment that was in store for her without any complaint. "Humiliate me until I am almost nothing; until I become a spark in the fire of the love burning in Thy Divine Heart," is one of the most talked about words attributed to Saint Alphonsa. If the Vatican's plan works out, the psychopathy of a helpless, tortured individual could become epidemic.