Some of the attendees of the conference raised counter slogans, prevented them from raising the banner that they had brought in. 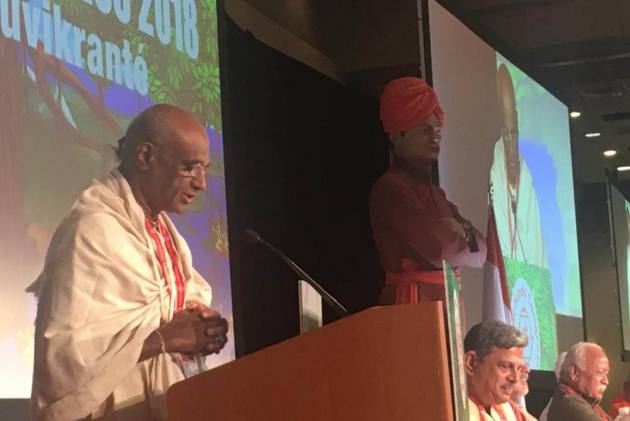 The ongoing World Hindu Congress in Chicago witnessed a brief disruption on Friday following protests from a group of people who were demanding the religious leaders at the meet to oppose the Indian government's alleged "actions against religious minorities".

According to a PTI report, the protestors suddenly started raising slogans to the surprise of the event organisors. The organisers alleged that the protesters sneaked into the venue through a "fake identity card".

Some of the attendees of the conference raised counter slogans, prevented them from raising the banner that they had brought in.

Subsequently, two of the women protesters were arrested and local police charged them with disorderly conduct and trespassing. They were, however, released later in the night, the report added.

RSS chief Mohan Bhagwat and its joint general secretary Dattatreya Hosbale and six other top Hindu religious leaders were participating in a panel discussion on collective efforts for Hindu resurgence when the protesters seated at two different places in the hall suddenly stood on their chairs and started raising slogans such as "Stop Hindu Fascism" and "RSS turn around, we do not want you in town."

With more protests planned for Sunday, security in and around the hotel has been intensified. Vice President Venkaiah Naidu is slated to address the WHC Sunday.

"About six of us were at the WHC today. We were there to protest the conference, the organiser, the speakers, and the attendees and their support for the current and historic violence that's been propagated by the RSS and other similar organisations," one of the woman protestors told PTI after being released.

"We sat through most of the plenary this evening. There were about six speakers. Two of us were on one side of the room and the rest sat on the other side of the room. We stood up with a banner. We chanted 'RSS turnaround, we do not want you in town'," she said and alleged that they were immediately swarmed and other conference attendees started screaming at them.

The two of these women were handcuffed as they came out of the hotel. The police arrested another individual for allegedly spitting on them.

"He did that in front of the police," she said.

"We mounted our disruption towards the end of the evening plenary session," the second woman protestor said, alleging that some of the attendees in the room snatched the banner from them.

Earlier in the day, Avaaz Foundation took out a full-page advertisement in The Chicago Tribune against the WHC. The advertisement cost them around USD 26,000.

The foundation on Friday also hired a mobile advertisement van which moved in the vicinity of the hotel.