What a paradox that a man known as a “permanent dissident” brought the Congress together after many years of bitter infighting. 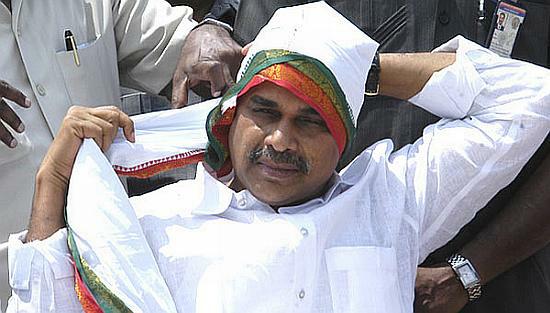 “I’ve adopted 'take it easy' policy,” quipped Y S Rajashekhara Reddy smilingly when I asked him in late 1994 what he was doing to bring the Congress back to power at a time when N T Rama Rao of the Telugu Desam looked all set to sweep Andhra Pradesh. It was the 1994 assembly elections and YSR was cooling his heels in his home at Kadapa and apparently catching up on current blockbusters because of his reference to the song “Take it Easy”, which was ruling the airwaves then. Every taxi driver worth his salt would have a cassette (MP3 had not been discovered and CDs were too expensive) of Prema Desham (that included the hummable “Take it easy”, "Muqabla", etc ) which was dubbed from the Tamil original Kaadal Desham. That film had put the dancing sensation Prabhu Deva and music maestro A R Rahman on the map.

YSR had acquired the tag of “permanent dissident”, always at the margins of the Congress because he could never get the faction-ridden party to speak up for him. In fact all the factions would huddle together to keep him out as they did in October 1992 when his name came up as a possible chief ministerial candidate. Vijay Bhaskar Reddy went on to replace N Janardhan Reddy, who was made to step down by the “high command”, as CM. It is not just an irony but a measure of him as politician that YSR, with back to back wins in the state, emerged not only as the tallest leader in AP but also in the Congress.

After briefly flirting with realpolitik and being ignored by the “high command” which chose Vijaybhaskar Reddy, YSR went back to being the lone ranger, loved by the people particularly in his stomping ground in Kadappa, but hated by the Congress. However, the Congress could never ignore him because Kadappa and even parts of Kurnool and other Rayalaseema districts considered YSR a “puli” (tiger), so apt for a man who came from Pulivendula.

Stories were legion about him. His brother, George, who later died, told me in Kadapa that YSR was always available to his constituents and that’s why they loved him. YSR and another former CM Chandrababu Naidu were great friends and junior ministers together in the Congress government in 1980 before Babu switched to the TDP started by his father-in-law NTR and became YSR’s bitter rival.

YSR’s father Raja Reddy had a fearsome reputation as a faction leader. Raja Reddy was axed to death some years later, dying in the same gory manner that many of his enemies had done earlier in the spiral of factional violence that Rayalaseema districts were notorious for. In fact, here faction allegiance counted, not faithfulness to the party, as M V Mysoora Reddy among other Congressman discovered when he lost the 1994 assembly election. Everyone knew the NTR juggernaut had not mowed him down, but “YSR had made him lose.” The YSR-Mysoora Reddy rivalry briefly saw the latter having the upper hand – Mysoora even became home minister – but eventually had to leave the Congress and find refuge with the TDP in 2004 and has become a has-been after YSR became CM.

YSR never lost an election as an MP (four consecutive times) because Kadappa was seen as his pocketborough and when he switched to fight as an MLA (he won six times), his brother Vivekananda Reddy kept the seat warm till recently when Jagan Mohan Reddy, YSR’s son, was elected.

YSR was always ready to speak whenever he was in Hyderabad. “So, Iyengarji, what’s happening?”, was his opening line while his eyes twinkled. If the fact that he was so friendless in the Congress bothered him, he never showed it. He was never a whiner about the bad deal he got in the Congress because he acknowledged that, at least partly, he was responsible.

When his daughter Sharmila got married in 1996, trainloads and busloads of people came to Pullivendula for the wedding. And YSR was the proud father of the bride making sure every guest was taken care of. Even then Prime Minister P V Narasimha Rao who was largely responsible for thwarting YSR’s rise in the Congress, came for the wedding.

The year 2003 was life altering for YSR. His 1400 km padyatra in the backward districts of AP that saw him trudging the miles in over 45 degrees celcius temperatures – he had to halt briefly after being strongly advised by doctors to do so when he got a sunstroke – was what brought him to power dislodging the media darling Chandrababu Naidu who projected himself as the CEO of AP.

The last time I met him for a chat was in 1999/2000 with my husband (who was interviewing him for his paper, Gulf News), when he was president of the Andhra Pradesh Congress Committee. YSR had just returned from a tour of the districts and had contracted conjunctivitis. It was Easter, but YSR not being religious, was accessible as ever. As always, there was some sarcasm about the governance of Babu who was then CM and plenty of self-deprecating humour about his position in the Congress and many cracks at the Congress itself which had just seen youth Congress goons vandalizing Gandhi Bhavan, the headquarters of the Congress.

As we left, wife Vijayalakshmi was putting drops in his eyes so that his “red eyes” would get better soon and he could get down to stitching the Congress together. And what a paradox it was that a man known as a “permanent dissident” had brought the Congress together after many years of bitter infighting.