Relax, It's All Over

Almost a decade ago, I read a little legend on a stop sign glowing red in an autumn night and so, years before everyone else, I knew the end was nigh for Delhi.

I am a voracious reader. I even read road signs. Almost a decade ago, I read a little legend on a stop sign glowing red in an autumn night and so, years before everyone else, I knew the end was nigh for Delhi. What I had just read was an epitaph for a way of life. 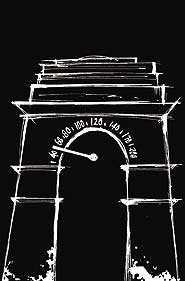 That night, I was returning home after far too many months overseas. The very smog of the airport road smelled pleasantly of home as my taxi coasted demurely to a stop at a red traffic light.

"What’s the problem?" I asked the driver. By ancient custom, lights that turn red in the wee hours of a Delhi night are to be jumped at over the ton. Prithviraj Chauhan set the trend while escaping from the famous swayamvar and his fugitive hoofbeats still ring in our ears.

"No problem, RELAX," the driver said, settling back comfortably and breaking out the pan masala.

"Relax?" I barked in alarm.

"RELAX," he repeated calmly, pointing to the lights. The red light backlit a legend stencilled in capitals. ‘RELAX,’ it said. Alarm gave way to outrage. While I was away, behind my back, a perverted turncoat policeman had been going around the city with a stepladder and stencilling this tranquillising message on all the red lights, which are there to be jumped. Relax at a red light? Is nothing sacred?

Of course, much as we would like to believe it, our Delhi is not the creation of swashbuckling Tomars and Chauhans. That’s a fairy tale fit for tourist brochures. Rajput, Turk, Afghan and Mughal are redundant history, shouldered aside by the new conquerors of this city, who made space for themselves with the good-natured pushiness of the frontier spirit. Which frontier? The North West Frontier, of course, where the Frontier Mail used to come from. Pakistan, you know.

Partition refugees created the present city of Delhi. They arrived with only the shirts on their backs and a fortune to rebuild. They were people in a hurry and their momentum still drives us to do the things that people from other cities find peculiar and even frightening about Dilliwalas. We never queue up like other people because it’s a waste of time. We impatiently fight our way into buses and trains. We eat standing up from handcarts in the streets, to save time. We never drive in our lanes because we want to get ahead of everyone else in every lane. And at night, we jump lights at the speed of sound.

Sorry, we used to jump lights. Now, the city wants citizens to RELAX. The police run roadkill figures on an LED screen at the ITO intersection, like the ambient temperature is displayed elsewhere. They lurk behind tree-trunks with radar speed guns. They hunt down speeders—like mad dogs—in interceptor cars. The frontier pioneers have been sidestepped and overtaken by fresh immigrants—poignant Bengalis, tormented Malayalees, long-headed Biharis and Tamils who rise before dawn. With them, they have brought the vices of gentility, patience and common sense.

The city has changed beyond salvage, and nothing is sacred any more.