In our ordinary human ability to sweep the debris off the pavement and set up stall again lie our greatness and our strength. Why make it more than it is? For in so doing, we end up making it less than it is. 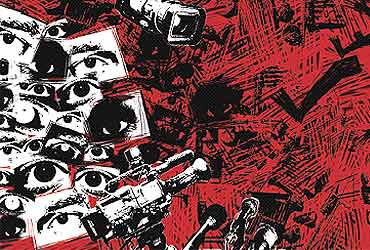 Delhi’s pre-Diwali dhamakas had me reeling. In shock at the blasts and revulsion at the spin—by politicians and media alike. "India Shall Not be Defeated", was the anthem put out by the PM’s office. In the grand language of good versus evil. In rhetoric borrowed from George Bush and 9/11 we elevated the miserable, criminal killing of civilians to black majestic heights of Darth Vaderesque power. The attacks were a cowardly crime. The anthem made them grand, converting, in an instant, lowly bombers into vanguards of the evil empire. But I wonder if the nation, in the hands of its spin-doctors, lost some of its sheen. Surely India does not need to grandstand in tired, leftover language? Or, be spurred on to make extravagant statements of its invincibility? Surely India is greater, and truly more invincible than that? Denounce the act. Even do it in arcane language of ultimate condemnation— call it ‘dastardly’ if you must. Then find the criminals and punish them. But spare the nation the Rambo spin. On October 29, Delhi was briefly a frayed city.

It needed soothing with dispassionate news and simple fact. But news networks went scrambling for sensation— little substance, a lot of noise. Bystanders caught like deer in headlight glare. Mikes thrust at unsuspecting faces. ‘Eye witnesses’ given five seconds of fame, in return seeing more than they did. Grizzly limbs and charred bodies making it past the edit table. The same news clip running on auto feed, as 24-hour television waited like a salivating monster for the smoke to clear, so it could forage amid the debris for a tasty human-interest story. Thank the constellations for making Diwali and Eid such cosy cousins this year. Otherwise I fear a communal tilt may have been one outcome of this determined scramble to the feast.

Delhi fights back, Delhi won’t be defeated, defiant Delhi—screamed TV networks on October 30, the morning after the blasts, as shops in Sarojini Nagar and Paharganj opened for ‘business as usual’. A grand crime demands a grand response. And because the tale is ultimately only as good as its teller, news reporters bristled with import at performing a national duty. In truth, shopkeepers wanted to off-load their Diwali stock. And Sarojini Nagar shops pre- and post-blast are great value for money. People are curious. Even heartless. Life goes on. We can be fatalistic about death. We also carry around deep belief in our immortality. But that day, early bird TV reporters imbued our everyday acts of life and living with soldierly mission and meaning.

Mundane consumerism found a higher purpose. If you had a mike thrust at you by Oprah wannabes asking ‘probing’ questions like—‘Why are you wandering amid the war zones of Sarojini Nagar or Paharganj? Would you dare say something as banal and utterly real as, "I am here to buy pant-shirt for dewarji?" No. You end up saying, "I am shopping in the service of the nation. I shall not be cowed down by dastard terrorists!" You may even believe your spin. Yes, India is resilient. And Delhi won’t be defeated. In our ordinary human ability to sweep the debris off the pavement and set up stall again lie our greatness and our strength. Why make it more than it is? For in so doing, we end up making it less than it is.

One Hindi TV channel collected Delhi’s noteworthy notables— ex-CMs, current ministers, socialite-activists and sundry poets—in its studio the day after the blasts. A sort of cross between We the People and a Mushaira. What a genius idea— make Delhi bare its wounded soul in verse. A collective therapeutic frenzy of pain would splatter the studio walls with beautiful poetry. Raw emotion unleashed on national TV. The socialite-activist struggled with, "Yeh log toh bachche ko bhi mare hai!" in a curious aspirated accent. Then the healing touch of secular profundity, "Yeh koi dharam ka baat nahin hain. Jo burra hai, so burra hai." That’s about as deep as it got. What’s bad is bad, she said. I amen, because the whole show was pretty bad. An insult to emotion and a travesty of language. But if pain was the intent, it worked. This country’s soul runs deeper than 24-hour TV can possibly plummet. Spectacle and spin will only sell us short as a people.